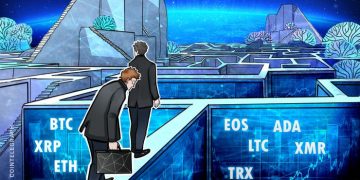 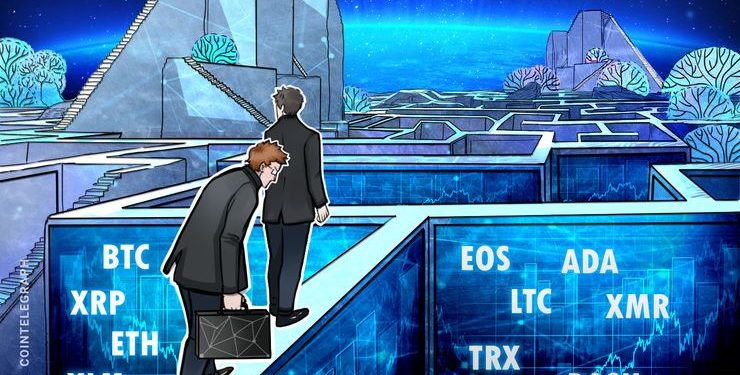 In May 1997, Amazon’s share price was quoting at $18. Short-term expectations propelled it to $300 by December 1998 and from there it slumped to $6 per share after the dotcom bubble burst. At that point, the market was severely underestimating its potential and the non-believers were claiming victory. However, the model proved everyone wrong, and Amazon became the second company in the history to reach a market capitalization of $1 trillion.

Blockchain entrepreneur and industry advisor, Vinny Lingham, said to Cointelegraph: “The climate can change once more companies with solid use cases emerge from their development cycles, gain traction and prove sound business value to make a difference.” Just because the prices have crashed, it doesn’t signal the end of an asset class.

As the price action in the near-term is dictated by technicals, let’s look at the charts and forecast the probable price action.

During a waterfall decline, support levels are not honored, making it difficult to predict the bottom. The pullbacks also usually last only for about 1–3 days. Bitcoin attempted a recovery on Nov.r 21 that failed at $4,799.74.

Subsequently, the BTC/USD pair has resumed its downtrend, making a new low. Both the moving averages are sloping down and the RSI is deep in the oversold territory. This shows that the sellers are in command.

Any recovery attempt will face stiff resistance at the downtrend line and $5,000. Though we want to use the current fall to buy, we believe that the traders should wait for a level to hold before initiating any long positions.

Ripple has broken down of the uptrend line, which shows that it is also being affected by negative sentiment. However, it remains well above its lows, which confirms its outperformance.

The moving averages have started to turn down and the RSI has dipped below 40, which suggests that the supply is outpacing demand.

The next support on the downside is $0.37185 and below that, $0.26913. The XRP/USD pair will point to a consolidation if the prices quickly scale above the uptrend line and the moving averages flatten out. For now, it is best to stay on the sidelines.

Ethereum is not finding buyers at higher levels. The pullback stalled at $141.91, which shows a lack of buying support.

Currently, the bears are attempting to extend the decline to the next support level at $110. Though anything is possible in the markets, we believe that the oversold levels on the RSI point to a probable pullback. We don not recommend trading on hope, hence, we shall wait for a new buy setup to form before suggesting any trade in it.

On the upside, the ETH/USD pair will face a stiff hurdle at $167.32. The 20-day EMA is also close to this level, making it a critical resistance to cross for the bulls.

Conversely, if the bulls successfully defend the $0.184 level, the XLM/USD pair, might pull back to the 20-day EMA and above it to the downtrend line. We suggest traders wait for a new buy setup to form before entering any long positions.

Though EOS has broken down of the critical support at $3.8723, it has not plunged. This shows some buying support at lower levels. The oversold reading on the RSI also points to a recovery attempt.

If the EOS/USD pair fails to rise above $3.8723, it can slump to $3. We do not find any bullish patterns developing, hence, we are not proposing a trade in it.

The bulls have been attempting to hold the support at $32 for the past three days, but have not been able to push Litecoin higher.

Still, the oversold levels on the RSI point to a probable pullback. On the upside, the LTC/USD pair will face stiff resistance at the 20-day EMA and above that at the $47.246–$49.466 zone.

On the other hand, if the bulls succeed in rebounding from close to current levels, the digital currency will again attempt to break out of $0.05. If successful, the pullback can extend to $0.060105, which is likely to act a major resistance because this is the previous support and the 20-day EMA is also close to this level.

Though the bulls attempted a pullback in Monero on Nov. 21 and 22, they could not push prices above $72. As a result, the price turned down once again.

In this down leg, if the XMR/USD pair plunges below $60, the fall can extend to the next support at $46.

If the virtual currency finds buyers at the current levels, the bulls will again attempt to break out of the $72 level. If this level is crossed, the pullback can continue to next overhead resistance of $81.

TRON could not scale above the previous support-turned-resistance of $0.01587681 in the past two days. However, a small positive is that the bulls have held prices above the Nov. 20 intraday low of $0.0122194.

Dash continues to trade near the support of the descending channel. This shows that sellers have the upper hand.

Any breakdown of the channel will be a negative development that can push the DASH/USD pair down to the next support at $75.

If the support of the channel holds, the bulls will attempt another pullback to scale $120 levels and reach the next overhead resistance of $129.58. We believe that the traders should wait for a trend reversal before initiating any long positions.

The SEC’s Recent Rulings Are More About Exchanges Than ICOs

The SEC's Recent Rulings Are More About Exchanges Than ICOs