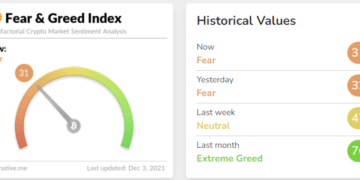 Bitcoin’s (BTC) slump continued a few rungs lower on December 3 as the price fell below $54,000. Traders should take note of the significant increase in sale volume visible on the BTC/USD daily chart on the same day.

Investors are alarmed by the appearance of a new COVID-19 version as well as hawkish comments from the Federal Reserve, according to recent reports. Meanwhile, seasoned finance icon Charlie Munger added fuel to the flames by drawing parallels between the price activity in the cryptocurrency market and the dot-com era, which culminated with the bursting of the dot-com bubble.

Consider what analysts have to say about the current market and what to look out for as the year 2021 draws to a close. Source: Bloomberg News.

During the past few weeks, the “listless” nature of Bitcoin’s price action has been highlighted by crypto market intelligence firm Decentrader, which has pointed to choppy price action on lower timeframes and evidence of a slow downtrend on higher timeframes as reasons for traders’ increased fear that “the bull run may be over.”

The researchers predicted that after Bitcoin breaks out of its current trading range, “the most obvious support cluster sits around $52,000 to $53,000,” which is close to the place where the price collapsed during the May crash earlier this year, according to the analysts.

Bitcoin and Ether are “on sale” at these levels

As a result of the recent price movement of Bitcoin, David Lifchitz, managing partner and chief investment officer at ExoAlpha, proposed that “Bitcoin and Ether had been bought “on-sale” when they reached $54,000 and $3,900″ for those who were able to purchase them at such levels.

He stated that the price of Bitcoin continues to be impeded by “the Mt. Gox liquidation saga,” and that Bitcoin investors are likely to “remain cautious ahead of the distribution, which is expected to take place sometime in Q1 2021.”

Additionally, Lifchitz stated that it is important to keep a watch on the spread and impact of the Omicron version of COVID-19 since “a bad epidemic leading to lockdowns would likely have an impact on the market at first.”

It has been claimed that this might lead to another round of government stimulus, “which would increase global debt and devalue currencies against gold and cryptocurrencies, while at the same time funny money could be exchanged for immutable ones such as Bitcoin,” according to Lifchitz.

“So after an initial panic-induced dip, cryptos could take advantage of such outcome if we refer to what happened previously, even if this remains highly speculative. We’ll know in the next couple of weeks if Santa will come this year or if he will remain on lockdown with COVID!”

It’s starting to look like September 2021 all over again