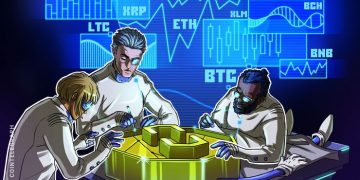 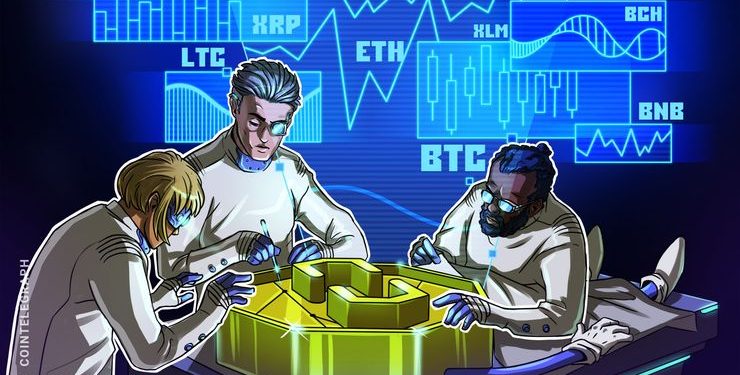 Ethereum (ETH) co-founder Joseph Lubin expects the global economy to grow 10 times in the next 10 to 20 years, powered by the mass use of blockchain technology. According to him, the current condition of the nascent space is similar to the use of email in 1983, when only a handful of early adopters were using it.

Tyler and Cameron Winklevoss, founders of the Gemini crypto exchange, have welcomed Facebook’s rumored stablecoin. However, they said that cryptocurrencies will usher in a greater disruptive development compared to the social networking platforms.

Gradually, large traditional players in various fields are recognizing the power of blockchain technology and cryptocurrencies, partnering with various startups to gain the first mover advantage. Different nations are also not leaving any stone unturned to make the most of the budding technology.

These developments are positive for the future. Nevertheless, the price is yet to respond to improved fundamentals. What do the charts of the major cryptocurrencies project? Let’s find out.

Though Bitcoin (BTC) has been rising above the psychological resistance of $4,000 for the past three days, it has not been able to sustain it. This shows profit booking at higher levels. If the price doesn’t close above $4,000 soon, we anticipate a mild correction to the 20-day EMA and below it to the uptrend line.

If the digital currency rebounds sharply from either of the supports and breaks out of $4,000, it will be a positive sign. It is then likely to rally to $4,255, which is a major hurdle. A close (UTC time frame) above $4,255 will complete a double bottom, which has a pattern target of $5,273.91.

Currently, both the moving averages are sloping up and the RSI is in the positive territory. Hence, the path of least resistance is to the upside.

Our bullish view will be invalidated if the BTC/USD pair dips below the moving averages. On a fall below the 50-day SMA, the pair can drop to $3,355. Below this level, the final support is at $3,236.09. The downtrend will resume if the bears sink the price to a new yearly low.

Traders can retain the stop loss on the long positions below $3,236.09. We shall soon trail the stops higher to reduce the risk. We might suggest adding long positions on a close above $4,255.

Ethereum (ETH) failed to sustain above $144.78 on March 16. This shows a lack of buying at higher levels. The price has again dipped back to the 20-day EMA, below which a fall to $134.50 is probable. Both the moving averages have started to slope up, which indicates a minor advantage to the bulls.

A breakout and close above $144.78 can result in a move to the next overhead resistance of $167.32. If this level is also crossed, it will complete a bullish ascending triangle pattern that has a target objective of $251.64.

On the other hand, if the ETH/USD pair plunges below the moving averages, it can slide to the trendline of the ascending triangle pattern. Traders can keep the stops on the remaining long positions at $125.

Ripple (XRP) has been trading close to the moving averages for the past few days. This period of consolidation is unlikely to continue for long. We expect a decisive breakout or a breakdown within the next few days.

A breakout of $0.33108 will propel the XRP/USD pair to the resistance line of the descending channel. If the bulls succeed in pushing the price above the channel, we expect the pair to pick up momentum and start a new uptrend.

On the other hand, if the digital currency plunges below the uptrend line of the ascending triangle, it can drop to the next support at $0.27795. Below this level, a drop to $0.24508 is possible. Traders can protect their long positions with the stop loss just below $0.27795.

Litecoin (LTC) broke above the resistance line on March 16, but it is facing profit booking at higher levels. If the price rebounds off $56.910, it will indicate strength and a rally to $65.561 is probable. Above this level, the up move can extend to $69.2790. Though the price has been moving up, the RSI has failed to catch up. This negative divergence on the RSI is worrying us. Traders can trail the stops on the remaining long positions to $52.

We are not recommending booking complete profits at the current levels because, in a bull phase, the negative divergence on the RSI can often give a false signal. Notwithstanding, since it is a warning sign, we have proposed trailing the stops to protect the paper profits.

If the LTC/USD pair breaks down of the 20-day EMA, it can slide to the next support at $47.2460. The 50-day SMA is just below this level. A breakdown of this support will indicate weakness.

EOS has been struggling to breakout of $3.8723, but is finding support close to the 20-day EMA. Both the moving averages are gradually trending up, and the RSI is in the positive territory, which shows that the bulls have a slight edge.

If the EOS/USD pair sustains above $3.8723, it can move up to $4.4930. But if the pair turns down from the current levels and breaks below the 20-day EMA, a fall to $3.1534 is probable. Below this support, the trend will turn in favor of the bears. Therefore, traders can retain the stops on the remaining long positions at $3.1. We shall soon trail it higher.

Bitcoin Cash (BCH) has quickly risen to the overhead resistance of $163.89. The attempt to breakout and sustain above it has failed. Still, with the 20-day EMA starting to slope up and the RSI in the overbought zone, the path of least resistance is to the upside. Above $163.89, it can rally to $175 and above it to $220.

If the BCH/USD pair fails to scale above $163.89, it will again slide back to the 20-day EMA. The trend will turn negative if the bears sink the price below $120.46, and traders can retain the stop loss on the long positions at $116. We shall watch for a couple of days and then recommend trailing the stops higher.

Binance Coin (BNB) broke out of the overhead resistance at $15.9100517 on March 16. We expected it to continue higher after breaking out of the resistance. However, the digital currency is stuck near the breakout levels for the past two days.

A breakout of $16.6442826 can propel the BNB/USD pair to its target objective of $18. Both the moving averages are trending up and the RSI is in the overbought zone, which shows that the bulls have the upper hand.

However, if the price again slips back below $15.9100517, it will indicate profit booking at higher levels. The support on the downside is at the uptrend line and below it at 20-day EMA. If the 20-day EMA breaks down, the short-term trend will turn in favor of the bears. Therefore, please trail the stop loss on the remaining long positions to $14.

Stellar (XLM) is consolidating near the recent swing high, which is a positive sign. The 20-day EMA is sloping upward and the RSI is close to the overbought zone, which suggests that the bulls are in command.

Our bullish view will be invalidated if the price turns down from the current levels and slips below the 20-day EMA. In such a case, a fall to the uptrend line is probable. The traders can keep the stop loss on the long positions at $0.08.

Though Tron (TRX) broke out of the 20-day EMA on March 16, it turned back from the 50-day SMA. The bulls could not keep up the buying pressure and it is currently struggling to hold the 20-day EMA.

Both the moving averages are sloping down and the RSI has also slipped into the negative territory, which suggests that the bears have the upper hand. The TRX/USD pair will pick up momentum above $0.02815521. Until then, the bears are likely to sell on rallies.

On the downside, support lies at $0.02094452. If this level breaks, the next one to watch is $0.01830. We remain neutral on the digital currency until it breaks out and sustains above the range.

Contrary to our assumption, if the price sustains below $0.051468, it can drop to the 20-day EMA, which should provide support. If this support breaks, the pair will extend its stay in the range.