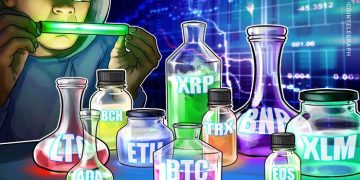 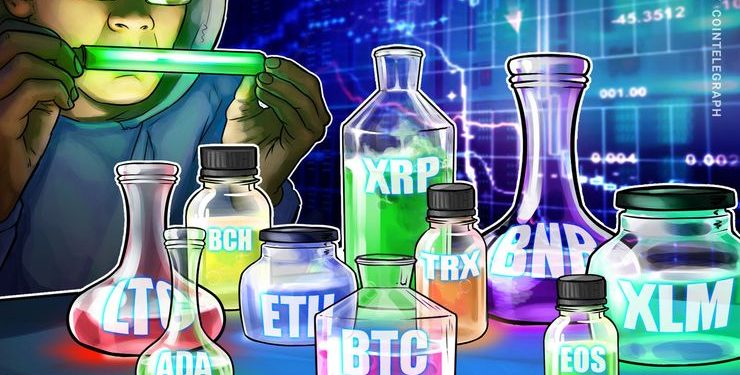 Barclays internet analyst Ross Sandler believes that a cryptocurrency by Facebook could add $19 billion to its revenue by 2021. If that happens, it will help expand the reach of cryptocurrencies and will be a major sentiment booster for the whole sector.

It is not only in the West that crypto is generating significant interest. Chinese cryptocurrency mining manufacturer Canaan Creative is rumored to have secured hundreds of millions of dollars of financing from unnamed parties.

We find numerous companies that have been moving ahead with blockchain– and crypto-related projects. This shows that the sector is generating huge interest from traditional players. It is only a matter of time before the price of cryptocurrencies starts to react to all these positive fundamental developments.

However, analysts at Bloomberg expect Bitcoin to head southward. They have observed that the price action is similar to November of last year, which had led to a sharp fall. But what do our charts forecast? Let’s find out.

The bulls are providing support to Bitcoin (BTC) at the 20-day EMA. Both the moving averages are gradually moving up and the RSI is in the positive zone. This shows that bulls have a slight advantage. However, in order to solidify their position, they should quickly carry the digital currency above $4,000.

We expect a new uptrend on a breakout and close above $4,255, as it will complete a double bottom pattern that has a target objective of $5,273.91. Traders can add to their long positions on a close (UTC time frame) above $4,255.

On the downside, the BTC/USD pair has support at the 20-day EMA. If this breaks, the next support is at the uptrend line and finally at the 50-day SMA. If the pair plummets below the 50-day SMA, it can drop to the final support zone of $3,355–$3,236.09. This is the last support, below which, the downtrend will resume. Therefore, traders can maintain their stops on the existing long positions below $3,236.09. We shall raise the stop loss before the end of this week.

The bulls are struggling to keep Ethereum (ETH) above $134.50. Though they purchased the dip to the 50-day SMA on March 12, they have not been able to sustain above the 20-day EMA. Currently, both the moving averages are flattening out and the RSI is close to the midpoint. This suggests a consolidation in the near term.

A breakdown of the 50-day SMA can sink the ETH/USD pair to the next support at $116.30. This is a major support, as the uptrend line of the ascending channel also lies at this level. Hence, we anticipate buyers to step in and buy close to $116.30. But if the pair breaks down of this critical support, a drop to $102.49 is probable.

The intraday range in Ripple (XRP) had been shrinking for the past few days. The attempt by the bulls to resolve the tight range on the upside is not finding buyers at higher levels. This is a bearish sign. A breakdown of the uptrend line can sink the virtual currency to the next support at $0.27795. If this level also breaks down, the final support is the yearly low of $0.24508, below which the downtrend will resume.

However, as long as the XRP/USD pair stays above the uptrend line of the ascending triangle, the bulls are likely to attempt to scale above $0.33108 once again. On a close (UTC time frame) above $0.33108, the pair is likely to pick up momentum and rally to the downtrend line of the descending channel. A breakout of the channel will indicate a likely change in trend. For now, traders can keep the stop loss on the long positions below $0.27795.

Litecoin (LTC) found support close to the 20-day EMA on March 12, but the bulls have not been able to breakout of the overhead resistance at $56.910. However, both the moving averages are sloping up and the RSI is in positive territory, which suggests that the bulls have the upper hand. A breakout and close (UTC time frame) above the overhead resistance zone of $56.910–$59.4494 can propel the digital currency to $65.5610 and above it to $69.2790.

Contrary to our assumption, if the LTC/USD pair breaks down of the 20-day EMA, it will weaken the momentum and a fall to $47.2460 is probable. Therefore, traders can protect their gains on the remaining long positions with the stop at $50. The only thing bearish on the chart is the negative divergence on the RSI.

EOS has failed to cross above the downtrend line for the past four days. However, a positive is that it has not yet broken down of the 20-day EMA. If the digital currency breaks out of the downtrend line and $3.8723, it can pick up momentum and rally to $4.4930.

On the other hand, if the bears sink the EOS/USD pair below the 20-day EMA, it can fall to the next support at $3.1534. The 50-day SMA is also located at this level, hence, we expect strong demand at this level. But if the seller’s break down of this critical support, it will re-enter the range and can slide to $2.1733. Hence, traders can protect their remaining long positions with the stops at $3.10.

Bitcoin Cash (BCH) had dipped closer to the bottom of the $120–$140 range on March 12, where buying emerged. However, the bulls have not been able to push the price above the moving averages, which shows a lack of demand at higher levels. The bears are likely to attempt to breakdown of $120 level once again. If successful the digital currency can fall to $105, which is a strong support. But if this support gives way, a retest of the yearly low of $73.50 is probable.

Conversely, if the BCH/USD pair rises above the moving averages, the bulls will attempt to breakout of $140 and rally to the next overhead zone of $157.95–$163.89. Above this zone, the next level to watch on the upside is $175. For now, traders can retain the stops on the long positions at $116.

Binance Coin (BNB) broke out of the pennant on March 12 but is currently facing resistance at $15.9100517. Both the moving averages continue to trend up and the RSI is in the overbought zone, which shows a strong uptrend.

A breakout of $15.9100517 can propel the BNB/USD pair to $18, above which a retest of the lifetime highs is possible. On the other hand, if the pair turns down from current levels, it has support closer to $14, below which a drop to the 20-day EMA is possible. As the traders have already booked partial profits earlier, we suggest to retain the stops on the remaining long positions at the breakeven. If the cryptocurrency does not sustain above $15.9100517  within the next couple of days, we shall suggest booking profits on the complete position.

Stellar (XLM) has been consolidating for the past two days. We like that it has not given up much ground. The 20-day EMA is sloping up and the RSI is close to the overbought levels. This suggests that the bulls are at an advantage. A breakout of $0.011245806 can propel the digital currency to $0.13427050.

Conversely, if the XLM/USD pair turns down from current levels, it can drop to the 20-day EMA, which is a critical support. If this support breaks, the pair can correct to the uptrend line. This line has provided support three times, hence, we expect the price to find buyers close to it. However, if the bears break down of the uptrend line, a retest of the yearly lows is possible. Therefore, traders can maintain the stops on the long positions at $0.08.

Tron (TRX) has been sustaining below $0.02306493 for the past two days. This shows a lack of demand at lower levels. The 20-day EMA is sloping down and the RSI is languishing in the negative zone, which suggests that the path of least resistance is to the downside.

Our bearish view will be invalidated if the price bounces off the current levels and rises above the moving averages. We shall suggest a long position if the digital currency sustains above $0.02815521. Until then, we remain neutral.

Cardano (ADA) has been range bound between $0.036815 and $0.051468 since Dec. 21. The price has bounced off the supports twice, which shows buying at lower levels. However, the bulls have not been able to break out of the range, which shows profit booking closer to the resistance of the range.

The 20-day EMA is sloping up and the RSI has also moved into positive territory. This shows that the bulls have the upper hand in the short term. A breakout and close (UTC time frame) above $0.051468 is likely to result in a new up move that can carry the price to $0.066121 and if this is crossed, the rally can extend to $0.080.

The traders can purchase the ADA/USD pair above $0.0565 and keep a stop loss at $0.044 for now. We shall trail the stop loss higher as the price moves up in our favor or if it fails to follow up after breaking out of the range.