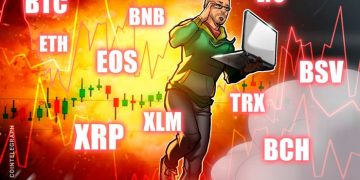 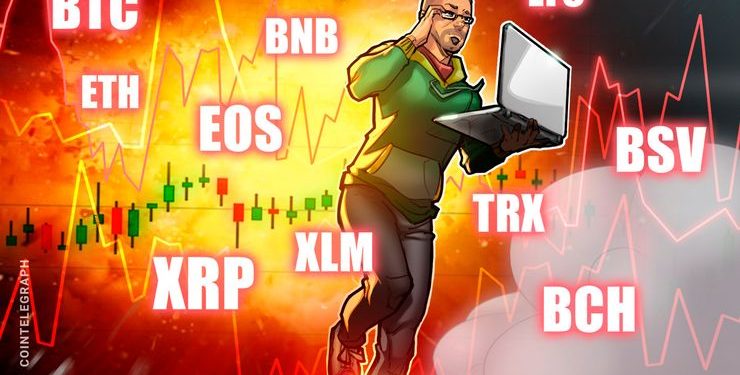 Binance CEO Changpeng Zhao recently tweeted that sooner or later, almost everyone will be directly or indirectly connected to cryptocurrencies. This is a strong statement. If proven correct, the market capitalization of the digital currencies will shoot up, well above the current level of $133 billion.

Zhao said that he is certain of a bull market in cryptocurrencies, but is not sure when it will start. We believe that most major coins have started the bottoming process and will soon start a new uptrend.

The successful completion of a recent ICO by the crypto unit of South Korea’s largest internet conglomerate Kakao Corp shows that the demand for ICOs is gradually returning. Similarly, Binance had also completed a couple of ICOs in record time and is planning to introduce more tokens that have solid use cases.

After launching the world’s first multi-crypto-based exchange-traded product (ETP) in November of last year, Switzerland’s largest stock exchange SIX will launch another ETP for the XRP token. These new launches show that the demand for the cryptocurrencies is likely to increase in the future and the companies are gearing up to benefit from it. So, what should traders do? Let’s take a look at the charts.

The up move in Bitcoin (BTC) is not convincing. It could not even challenge the psychological resistance of $4,000 on March 9. This shows a lack of conviction among the bulls. Currently, the price has pulled back to the 20-day EMA, which is an important support. If the bulls want to retain the advantage, they should defend the 20-day EMA. A bounce from this support will again try to break out of $4,000 and reach the critical overhead resistance of $4,255.

If the BTC/USD pair sustains above $4,255, it will complete a double bottom pattern, that has a target objective of $5,273.91. Traders can add long positions on a breakout and close (UTC time frame) above $4,255. Until then, maintain the stops on the existing long positions below $3,236.09.

On the downside, there is support at the 20-day EMA and below it at the uptrend line. If this support also cracks, the next one is at the 50-day SMA. Below this support, we anticipate a quick slide to the final support zone of $3,355–$3,236.09. The lackluster price action points to range bound action in the short-term. We will know the boundaries of the range within the next few days.

Ethereum (ETH) has broken down of the 20-day EMA. If it fails to find support at $134.50, a slide to the 50-day SMA is probable. Below this, the digital currency can correct to the critical support at $116.30. Therefore, traders can keep the stop loss on the remaining long positions at $125.

However, with both the moving averages flattening out and the RSI close to the center, the short term points to a consolidation. The resistance of the probable range is at $144.78 but the support is yet to be established. We should get a clear picture within this week.

Ripple (XRP) is range bound between $0.27795– $0.33108. The flat moving averages and the RSI close to 50 suggest that the consolidation is likely to continue for a few more days.

A breakout of the range will propel the XRP/USD pair toward the resistance line of the descending channel. If the price sustains above the channel, it will indicate a likely change in trend.

The bears will try to sink the LTC/USD pair to the 20-day EMA, which is a critical support. If the pair bounces off this support, it will again try to break out of $60. The target to watch on the upside is $65.5610. The uptrending moving averages and the RSI in the positive territory show that the path of least resistance is to the upside.

However, the negative divergence developing on the RSI is worrying us. Hence, we suggest traders keep their stops on the remaining long positions at $50. If the bears force the digital currency below the 20-day EMA, it can slide to $47.2460 and below it to the 50-day SMA.

EOS has turned down from the overhead resistance of $3.8723. The failure of the bulls to scale above $3.8723 is a negative sign. Currently, the price has corrected to the 20-day EMA. If the support holds, the bulls will attempt to push the digital currency above $3.8723 once again.

Nonetheless, if the 20-day EMA breaks down, the EOS/USD pair can drop to the next support of $3.1534. The 50-day SMA is also close to this level, hence, we expect the bulls to defend it.

A failure to bounce off the support at the 50-day SMA can result in a fall to $2.1733. Therefore, traders can keep the stops on the remaining long positions at $3.10.

Bitcoin Cash (BCH) continues to trade inside the tight range of $120–$140. This shows a balance between demand and supply. The flat moving averages and the RSI close to the center point to further consolidation.

Binance Coin (BNB) has been consolidating since breaking out of $15 on March 7. We had suggested to book profits on 40 percent of the long positions in our previous analysis. Traders got that opportunity on March 8 and 9 when price scaled well above $15.

After the sharp rally from the bottom, the BNB/USD pair has formed a pennant. A breakout of this is likely to resume the uptrend, with targets of $18 and higher. Therefore, traders can hold the remaining long positions with the stop loss at breakeven.

A breakdown below the pennant will start a deeper correction. Though the pattern target of the breakdown is $9, we anticipate a strong support at the 20-day EMA. But if this level fails to hold, a fall to the 50-day SMA is probable.

Stellar (XLM) triggered our buy recommended given in the previous analysis. It should now move up to the next overhead resistance of $0.13427050.

The moving averages have completed a bullish crossover, which is a bullish sign. The 20-day EMA has started to trend up and the RSI has risen close to the overbought territory. This shows that the bulls have the advantage in the near term. The XLM/USD pair might face some resistance at $0.1160, but we expect this to be crossed.

Our bullish view will be negated if the price turns down from one of the overhead resistances and plummets below $0.0820. Therefore, traders can keep the stop loss at $0.08. We shall soon raise the stops as the price moves northwards.

Tron (TRX) is struggling to bounce off the critical support at $0.02306493. This shows a lack of buyers even at these levels. The 20-day EMA is sloping down and the RSI is languishing in the negative zone, which suggests that bears are in command.

On the other hand, if the TRX/USD pair recovers sharply from the current levels and rises above both the moving averages, it will again try to breakout of $0.02815521. We might propose long positions after the pair decisively breaks out of the current range. Until then, we remain neutral on the digital currency.

Bitcoin SV has been consolidating between $71.412 and $65.031 for the past five days. Both the moving averages have flattened out and the RSI is also close to the midpoint. This shows a balance between the bulls and the bears.

The next move in the BSV/USD pair will start after the price escapes from this range. Above $71.412, a rally to $102.580 is probable with a minor resistance at $77.035. Hence, we retain the buy recommendation given in the previous analysis.

On the contrary, if the pair dips below the support zone of $65.031–$58, it can retest the low at $38.528. Therefore, traders should wait for a confirmed breakout and then initiate long positions.