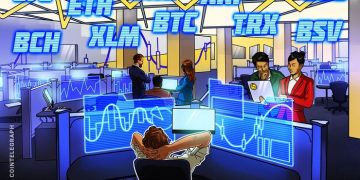 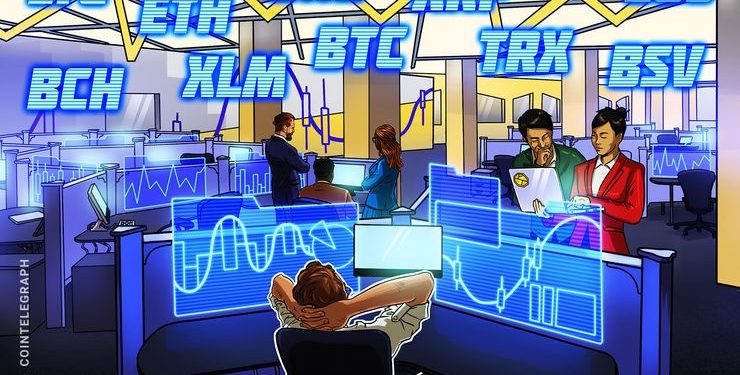 The market is cycling between periods of low volatility and high volatility. After a week of small range days, the range expanded on Monday and crypto markets decided to move southwards. What caused this sudden fall? There are no specific fundamental reasons that might have led to this selloff.

One of the possibilities might be the strengthening dollar that has risen in the past four days. Gold also fell sharply due to this on Friday. This shows that traders are keen to take on risk. Traders like to stay with assets that are showing a strong uptrend. The United States markets have been on a roll for the past ten weeks. Positive news on the trade deal between the U.S. and China might have encouraged some short-term traders to book profits in cryptocurrencies and shift over to the stock markets.

Though the current fall will dampen sentiment, it does not change the overall structure of most major cryptocurrencies. They remain in a bottoming formation and will continue to be volatile during the period.

After six days of small ranges, the range has expanded to the downside, which is a negative sign. Bitcoin (BTC) has broken down of the 20-day EMA and is currently close to the 50-day SMA. The downtrend line is also located at this level. This line had previously acted as a strong resistance; hence, it will now act as a strong support.

A breakdown of this critical support can plummet the BTC/USD pair to the next support at $3,355 and if this also fails to hold, the final support on the downside is $3,236.09. A new yearly low will resume the downtrend.

Conversely, if the price finds support at current levels, it will again try to rally above $3,900 and reach $4,255. A breakout of this critical resistance will suggest that a bottom has been put in place. The next few days are critical. Traders can maintain the stop loss on the long positions below $3,236.09.

Ethereum (ETH) has broken down of the 20-day EMA and has declined to the 50-day SMA. The failure to bounce off the 20-day EMA is a negative sign. If the 50-day SMA also fails to stem the fall, the next support on the downside is $116.30. Therefore, traders should keep a stop loss of $125 on the remaining long positions.

Contrary to our assumption, if the ETH/USD pair rebounds from the current levels, it will try to rise above $145 and reach the critical overhead resistance of $167.32. The pair will pick up momentum above this level. Currently, both the moving averages are flat and the RSI is just below 50. This points to range bound trading in the short-term.

Ripple (XRP) has turned down below the moving averages. It has again slipped to the support at $0.2950. This is the fourth time the price has fallen to this level. Repeated retests of the support level increase the probability of a breakdown. If this support cracks, the next level to watch on the downside is $0.27795. The bulls have held this support twice, once in mid-December of last year and again at the end of January 2019. Hence, this is a critical level. A breakdown of this can plummet the digital currency to the yearly low of $0.24508.

If buyers’ step in at the current levels, the XRP/USD pair can move up to $0.33108. A breakout and close above this level is likely to propel the pair to the resistance line of the descending channel, close to $0.40. Hence, traders should protect their long positions with a stop below $0.27795.

EOS has broken below the 20-day EMA and has plummeted to the next support of $3.2081. If the bulls fail to defend this level, the drop can stretch to the 50-day SMA. The traders can keep their stops at $2.90 on the remaining long positions.

A bounce from the current levels will again try to push the EOS/USD pair above the overhead resistance of $3.8723. The 20-day EMA is flattening out and the RSI has also dipped close to the neutral zone. This shows a balance between demand and supply.

Litecoin (LTC) rose above $47.2460 on March 2 but the bulls could not sustain the higher levels. The price has again corrected to the 20-day EMA, forming a head and shoulders pattern, that will complete on a breakdown and close below the neckline. The breakdown has a pattern target of $32.00, however, $40.4240, the 50-day SMA and the uptrend line can act as important supports.

The 20-day EMA is flattening out and the RSI has also declined to the midpoint. This shows that the bulls are losing their edge in the short-term. But if the LTC/USD pair rebounds either from the 20-day EMA or from the neckline, it will again try to scale above $50 and prolong its recovery. The traders can keep a stop loss of $40 on the remaining long position.

Bitcoin Cash (BCH) could not break out of the 20-day EMA for the past five days, which attracted selling. The price has broken down of the 50-day SMA, which is a bearish sign. It can now drop to $116.79 and below it to $105. Traders who are long can keep their stop loss at $116.

The BCH/USD pair will prove us wrong if it reverses direction from the current levels and breaks out of $140. Until then, every rise is likely to attract selling. The RSI is in the negative zone but the moving averages are still flat, which points to a consolidation.

Binance Coin (BNB) closed above $12 on March 2, thereby triggering our buy suggested in the previous analysis. However, the close above $12 attracted profit booking by the bulls that dragged the price back into the critical support zone of $12 to $10.

Both the moving averages are sloping up and the RSI is in the positive zone, which shows that the trend is up. The first support on the downside is the 20-day EMA and below it $9.2450296. If these support levels fail to hold, the slide can extend to the 50-day SMA.

Conversely, if the BNB/USD pair bounces off the 20-day EMA and breaks out of $12, it can move up to $15 and above it to $18. Therefore, traders who have entered long positions can keep their stop loss at $9.

Stellar (XLM) tried to break out of the overhead resistance at $0.09285498 on March 3 but failed. Currently, the price has turned around and broken below the moving averages. A break below $0.08184371 can result in a retest of the yearly low.

The 20-day EMA is flat and the 50-day SMA is sloping down. The RSI has also slipped below 50, which shows that the sellers are at an advantage.

Our bearish view will be invalidated if the XLM/USD pair turns around from the current levels and breaks out of $0.10. The pair has been a huge underperformer as it did not participate in the recent pullback. This shows a lack of interest among the market participants to own this cryptocurrency. We will wait for a trend reversal before recommending a trade in it.

If the TRX/USD pair holds above $0.01830, it is likely to extend its stay in the range and might offer us an opportunity to trade it. Nonetheless, if the bulls fail to defend the support at $0.01830, a deeper fall towards the yearly low is probable.

Our bearish view will be invalidated if the price turns around from the current levels and rallies above both the moving averages and $0.02815521.

Bitcoin SV failed to hold the moving averages. It is now threatening to break below the support at $65.031. This shows a lack of buying interest at higher levels.

The immediate support zone on the downside is between $60 and $58. If the BSV/USD pair plunges below this zone, a fall to the lifetime low at $38.528 is probable. With both the moving averages sloping down and the RSI in the negative territory, the path of least resistance is to the downside.

Contrary to our expectation, if the digital currency holds above the supports, it will again attempt to rise above $77.035. If successful, it can move up to $102.580 and above it to $123.980. Therefore, we might suggest long positions if the price sustains above $78. Until then, we do not find any reliable buy setups on it.