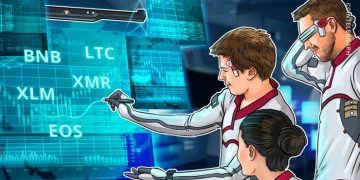 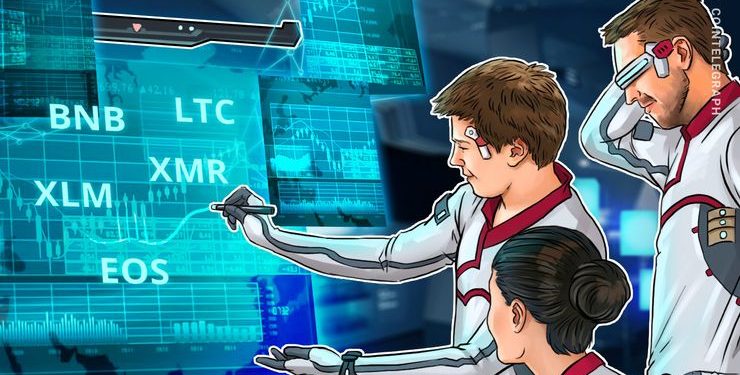 The combined market capitalization of all cryptocurrencies has already twice gone below $145 billion. However, it is positive that the market cap has not been making new lows recently. This shows demand at lower levels and is the first indication of a bottom formation.

Each new bull market has its own leaders. Traders should watch for the cryptocurrencies that start a new uptrend and sustain it: it is always better to trade them instead of hoping for the laggards to catch up.

The current recovery is backed by improving fundamentals. Fidelity’s new company, Fidelity Digital Assets, surveyed about 450 institutions and found that 22 percent already owned a cryptocurrency and were likely to double their allocation in the next five years. A few, however, were still in the wait-and-watch mode. We believe that if the prices confirm a bottom, these investors will also be forced to jump in. Let’s look at this week’s top performers and try to spot trend reversals.

After the successful sale of the BitTorrent token (BTT) and Fetch.AI (FET) token, the Binance Launchpad platform has announced the launch of its next supporting project, Celer Network, on Mar. 19 at 9am EST. Binance is attempting to revive initial coin offerings (ICO)  by supporting high quality tokens with strong use cases that generate interest among the participants.

Argentina is also bringing cryptocurrencies to the general public. Recently, its state public transport card allowed the use of Bitcoin for card top-ups. Additionally, the government of Argentina will match investments of up to $50,000 on projects selected by Binance. With these developments, Binance Coin has been on a strong run. Can this rally continue further? Let’s find out.

The BNB/USD pair has extended its strong run from the bottom. It easily scaled above the overhead resistance of $12 and skyrocketed to the critical resistance zone of $15 to $18. After a large-range week, we anticipate a consolidation or a minor correction in the next couple of weeks.

Nevertheless, if the bulls succeed in breaking out of $18, it will increase the probability of a retest of the lifetime highs. This will be a significant event and the pair will be the first major cryptocurrency to retest the highs.

Conversely, if the price turns down from the current levels, it should find support at $12. A breakdown of $12 will indicate weakness and increase the likelihood of a deeper fall.

Venezuela has allowed its citizens to send Bitcoin and Litecoin (LTC) through Remesas. Market participants are positive on Litecoin because it has lower fees compared to Bitcoin, and also has faster transaction confirmation time. With Litecoin’s next update, some believe that the transaction fees will fall further. Its Lightening Network has seen an increase to 1,059 channels between 163 participants, according to 1ml.com.

The LTC/USD pair closed (UTC time frame) above $47.2460 last week, triggering our buy recommendation. Traders can keep the stop loss at $40. The next level to watch on the upside is the zone between $69.2790 and the 50-week SMA. If the momentum carries the digital currency above both these levels, the rally can extend to $94.2590 in the medium-term.

Our bullish view will be invalidated if the bears push the price back below $56.910 and sustain it. The uptrend will weaken on a close below $47.2460 and the bears will be back in the driver’s seat below the support line.

Nexo provides instant loans to clients against their crypto assets. This way, the clients can keep their assets for the long term, but still monetize them for various uses like buying a home, a car, marriage, etc. in the short-to-medium term.

The company caters to a wide range of clients, issuing loans from $500 to $2 million per client.

Many believe that stablecoins are the way to go if one cannot ride the crypto volatility. Nexo offers an interest of up to 6.5 percent on stablecoins and 1-to-1 conversion guarantee to U.S. dollars for each stablecoin.

The coin’s popularity can be gauged from the fact that it has issued more than $300 million in loans in the past 7 months to more than 170,000 Nexo users. It is currently ranked 87 on CoinMarketCap, and Huobi’s listing of the Nexo tokens will greatly increase its liquidity. With the fundamentals in its favor, how does its chart look?

The NEXO/USD pair formed a rounding bottom pattern and broke out of the overhead resistance at $0.09431 on March 5. However, the bulls could not sustain the higher levels, and the price again slipped back below the breakout levels. This is a negative sign.

The rise from the low of $0.05266 on Feb. 6 was well supported by the 20-day EMA during every pullback. Currently, the pair has again dipped to the 20-day EMA, below which the next support is from the uptrend line. We expect the bulls to defend this support zone.

On the other hand, a breakdown of the uptrend line will indicate weakness that can drag the price back to the 50-day SMA.

EOS has been volatile during the week. It started the week by plunging, but recovered the next day. It dropped from fourth to fifth position in terms of market capitalization, losing to Litecoin. Can it reclaim back its position? Is the chart bullish? Let’s find out.

We had suggested that traders initiate long positions on a weekly close (UTC time frame) above $3.8723 in our earlier analysis. Though the EOS/USD pair rallied above $3.8723 in the previous week, it could not close above it.

Currently, the bulls are again attempting to sustain above the overhead resistance. If successful, traders can initiate long positions on a weekly close above $3.8723 and keep a stop loss below the critical support of $2.1733. Though there is a minor resistance at $4.4930, we expect it to be crossed. The next target to watch on the upside is $6.8299.

Conversely, if the price fails to sustain above $3.8723 and turns down, it will indicate weakness. A breakdown of $2.1733 will result in a retest of the yearly low.

Borsenmedien AG, a leading publisher in German-speaking regions, has acquired a 5 percent stake in micropayment solutions company SatoshiPay. With the partnership, readers can now pay for content from their wallet to the publisher in just a click.

Stellar (XLM) has been an underperformer in the current pullback. While most major coins are well above their yearly lows, Stellar is struggling to move up. Can it play catch up?

The XLM/USD pair has been a huge underperformer, as it is still stuck near the lows. It has failed to scale and sustain above the first overhead resistance of $0.09285498 for the past two weeks. Currently, the bulls are again attempting to rise above the resistance. If successful, the pair can move up to $0.13427050.

Both the moving averages are turning down and the RSI is still languishing in negative territory, which shows that the bears still have the upper hand. If the digital currency turns down from the current levels, it can plunge to new lows.

We shall wait for a trend reversal pattern to form before suggesting a trade in it.

Monero (XMR) was recently in the news after two bugs were reported by the crypto community. Due to one bug, a Ledger hardware wallet user reportedly lost about 1,680 XMR. The other bug enabled the hackers to send fake XMR deposits to crypto exchanges. While the second bug was fixed on the same day itself, the Ledger team has prepared a patch for the other bug that will be released in the near future. After Japan, now France is exploring a ban on anonymous cryptocurrencies. How did these events affect Monero’s price?

The XMR/USD pair has been forming a base near the lows, between $38.500 and $60.147, which is a positive sign. The longer the base, the stronger the eventual breakout from it will be. If the pair rallies above $60.147 and the 20-week EMA, it will indicate strength. The next level to watch on the upside will be $81. If the momentum can push the price above $81, the trend will turn positive and the price is likely to gradually move up to $150.

Contrary to our opinion, if the price plummets below $38.500, the downtrend will resume. Though the 50-week SMA is sloping down, the 20-week EMA is flattening out, which shows that the bears are losing their grip.

*Disclaimer: NEXO is a featured cryptocurrency from one of Cointelegraph’s sponsors, and its inclusion did not affect this price analysis.

Venezuelan Economist: Cryptocurrency Is 'Good' Money, Bolivars Are Not