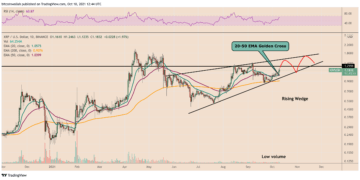 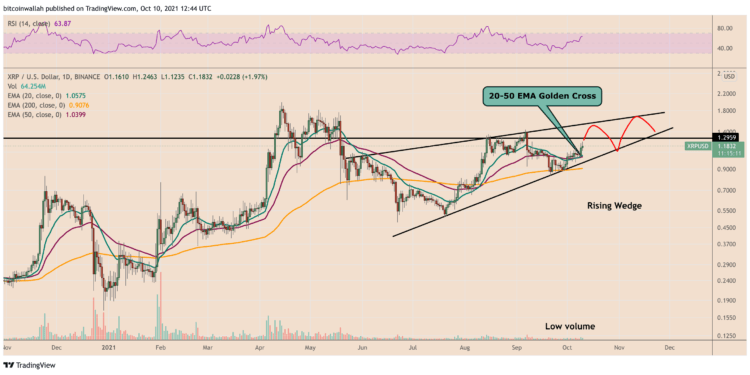 XRP is likely to reach $1.50 in the fourth quarter of 2021, following a bullish crossover between its 20-day and 50-day exponential moving averages (EMA).

The so-called golden cross has appeared on XRP charts numerous times throughout history. It last occurred on Aug. 10, and was followed by an 80% price gain, with XRP topping out seasonally at $1.43 before reversing course.

A rising wedge pattern provides additional clues that the market is about to surge higher. Prices of XRP have recently been influenced by the upper and lower trendlines of the ascending channel pattern, which have functioned as resistance and support. Moreover, as illustrated in the chart above, the cryptocurrency’s continuous upward movement was preceded by a significant bounce from the wedge’s bottom trendline.

As a result, XRP appears to have a strong chance of continuing its recovery toward the wedge’s top trendline. This suggests that XRP has a bullish aim of $1.50 in the near future.

Ripple vs. the SEC

The newest round of buying in XRP markets coincided with an update to the SEC v. Ripple litigation, which was released recently.

For those who are unfamiliar with the situation, the United States Securities and Exchange Commission filed an action against Ripple Labs and two of its executives in December 2020, alleging that they raised more than $1.3 billion through an unregistered securities offering through the use of XRP tokens, which is a cryptocurrency.

In response, Ripple Labs has been attempting to demonstrate that XRP is a utility token and not a security, citing a lecture given by former SEC director William Hinman, who stated that Ether (ETH), a blockchain token similar to XRP, is not a security asset and should not be treated as one.

As the present SEC regime sees it, Hinman’s ideas were purely personal in nature. However, according to subsequent discoveries, the Securities and Exchange Commission of the United States may have lied.

Ripple’s legal team recently produced court documents showing that the SEC directed its staff to assess digital currencies in accordance with the framework given by Hinman. The logs were submitted by Ripple’s legal team. It has the potential to demonstrate that Hinman’s speech was not merely a personal view, but rather an official directive.

Ultimately, Judge Sarah Netburn decided in favour of Ripple Labs and ordered the proofs to be reviewed “in camera.”

#XRPCommunnity #SECGov v. #Ripple #XRP BREAKING: 1/3 Judge Netburn Orders the SEC to submit for in camera review the two documents related to the SEC’s meetings with law firms and the email chain concerning discussions with a third party who received guidance from the SEC pic.twitter.com/zbjDi7HKYJ

The ruling came out on Friday, which was followed by a 17% rally in XRP’s price.

The rising wedge pattern on XRP is a bearish reversal pattern. As a result, future advances in the cryptocurrency may be subject to correction if the price falls below the lower trendline.

Because of the possibility of a bearish breakout, the price of XRP might go as low as the maximum distance between the wedge’s bottom and upper trendlines.
The cryptocurrency’s downside objective would be less than $0.65 at that point.