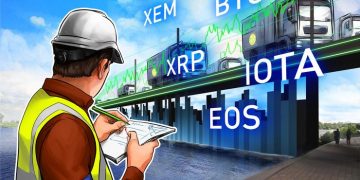 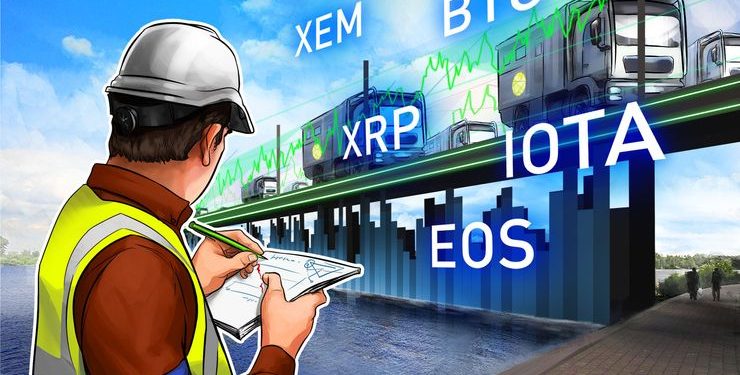 At the start of the year, the total market capitalization of cryptocurrencies was above $828 billion and many expected it to touch $1 trillion. However, after the hype of last year, the current bear market has been bone-crushing with no end in sight. The bloodbath in cryptocurrencies has plunged total market capitalization to below $130 billion and falling.

After the recent collapse, many analysts have forecast a further fall in prices and expect Bitcoin to bottom out around $3,000 or even $1,500. Others, however, believe that the fall is a good opportunity to buy for the long-term, as they believe that the fundamentals are improving.

Another important recent development was that the costly Bitcoin Cash war has ended, with Bitcoin Cash SV deciding to move on, leaving Bitcoin Cash ABC in charge of the Bitcoin Cash brand name. Whether or not this will result in a pullback in crypto prices remains to be seen.

NEM (XEM) is the best performer among the top cryptocurrencies in the past seven days, though it has slumped about 18 percent, showing bear dominance across markets.

Though the bears succeeded in breaking down the range, they are struggling to sustain prices at lower levels. Buying at lower levels has kept the XEM/USD pair close to the range of $0.07790717–$0.13125258.

The 20-day EMA has turned down and the RSI is in the negative territory, which shows that the bears have an upper hand. If they succeed in sustaining below the range, the fall can extend to the next support level at $0.05.

On the other hand, if the bulls defend the bottom of the range and push prices higher, a range bound action is likely to ensue. A trend reversal will be signaled after the price sustains above the range. In such a case, the rally can carry the digital currency to $0.2. We suggest traders wait for the trend to change and a new uptrend to start before venturing out to buy it.

Ripple (XRP) continues to be in the news as it announces new partnerships with various banks across the world. Though it has tied up with a few large banks elsewhere, it is yet to make an impact in the U.S. The latest rumor was that it might seal a deal with Bank of America, which would give a major boost to the digital currency.

Such rumors are a great buying opportunity during a bull phase. However, during a bear phase, traders should be careful while buying the rumor because if it turns out to be false, prices might plunge.

After holding out the week before last, the XRP/USD pair succumbed to selling in the past week. The pair has dipped close to the first support at $0.37185. If this support breaks, a retest of the year-to-date low of $0.24508 is probable. The zone between $0.22 and $0.24508 is likely to act as strong support.

Long-term investors can wait for the prices to stabilize at lower levels and then buy a portion of their desired allocation. The remainder can be added at higher levels as the digital currency starts a new uptrend.

The number of on-chain transactions on the EOS (EOS) network tops that of other popular cryptocurrencies, according to Blockchain Center. A report by BitMEX, a Bitcoin/dollar derivatives market based in Seychelles, has raised various question marks regarding EOS and has said that the protocol has a long way to go if it wants to challenge the dominance of Ethereum in the DApp world.

The EOS/USD pair broke down through critical support at $3.8723, marking a new year-to-date low. If the price sustains below this level, the fall can extend to the next lower level of $3 and below that to $2.1531.

The down sloping 20-week EMA and the RSI below 40 levels show that the path of least resistance is to the downside. The bearish view will be invalidated if the bulls quickly push the price above $3.8723 and scale the $4.49 mark. A trend change will be signaled if the digital currency breaks out of the $6.8299 range.

Last year after Thanksgiving, Bitcoin (BTC) started its scorching rally that peaked at $19,531.9, rising 144 percent within a month. However, this year, the digital currency is in a firm bear grip and is struggling to hold on to support levels.

Many have declared that the crypto bubble has burst and it’s all downhill from here. Bitcoin, however, has seen worse falls than these in the past and has recovered on every occasion.

The launches of Intercontinental Exchange-backed trading platform Bakkt and a crypto asset custody service by Fidelity in 2019 are poised to attract the institutional money that has been slow to enter the asset class. A favorable decision on a Bitcoin exchange-traded fund (ETF) in the U.S. could also result in the start of a new uptrend.

The BTC/USD pair extended its downtrend and easily broke below the minor resistances of $5,450 and $5,000. Though the next logical support is way lower at $2,974–$3,504.99, we expect some support close to the $4,100 mark. The RSI is about to enter into the oversold territory for the first time since January 2015, which shows the extent of damage in the current fall.

Any recovery will face a slew of resistances at $5,000, $5,450 and at $5,900. It is risky to try to catch a falling knife; hence, traders should wait for the virtual currency to find some buying support before entering long positions.

In a series of blog posts, the IOTA (MIOTA) foundation has announced that it is looking to remove the so-called Coordinator from the IOTA network. As the Foundation claims, this move will be a major step towards decentralization for the protocol.

The bears broke below the support at $0.4037 and continued lower, touching an intraweek low of $0.28. Currently, the MIOTA/USD pair is attempting to climb above $0.3193.

The down sloping 20-week EMA and the RSI in the negative territory show that every pullback will be met with selling pressure. If the support at $0.28 breaks, the fall can extend to the next lower level at $0.1427, with a minor support close to $0.23 levels.

On the other hand, if the price recovers from the current levels and rises above $0.4037, the digital currency might consolidate for a few weeks before attempting to start a new uptrend. We suggest traders wait for the trend to change before buying.