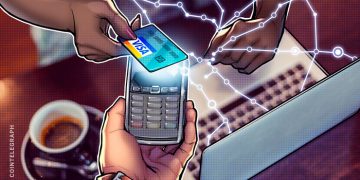 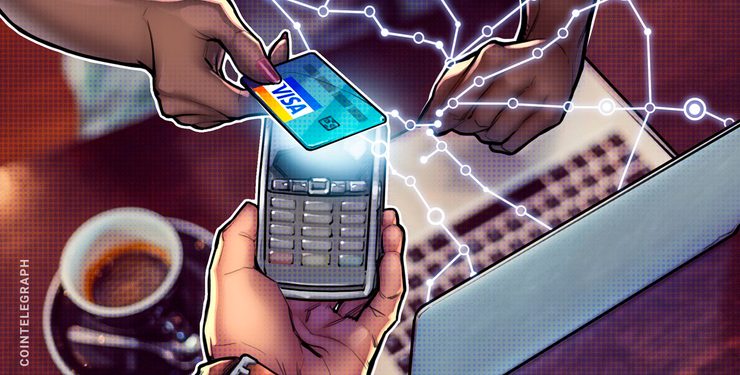 In doing so, Visa becomes the latest entrant into the blockchain-based payment processing arena. This move brings the company into direct competition with cryptocurrency startups like Ripple and mainstream players, such as Barclays and BNY Mellon with their Utility Settlement Coin (USC) project under the aegis of the Fnality Consortium.

Visa first announced plans to build a blockchain-based network for business payments back in 2016. At the time, the credit/debit card payment giant said the service would be developed in partnership with blockchain startup Chain.

According to a statement issued by the former executive president for strategic partnerships and innovation, Jim McCarthy:

“The time has never been better for the global business community to take advantage of new payment technologies and improve some of the most fundamental processes needed to run their businesses. We are developing our new solution to give our financial institution partners an efficient, transparent way for payments to be made across the world.”

Visa’s initial timeline included a pilot launch in 2017, but the company had to navigate a more complicated route than initially envisaged. The company replaced Chain as its partner on the project, electing instead to go with fintech firm FIS, e-payment operator Bottomline Technologies and IBM.

Starting in 2017, the company began to announce job vacancies for crypto and blockchain experts to work on a new payment gateway. In March 2019, the company also published another job listing for specialists in crypto payment solutions.

Three years on, Visa has finally gone ahead with the launch of its payment service, which promises near-real-time settlement for B2B transactions. In a blog post published by Visa on June 11, the company described its platform as the answer to the issues plaguing cross-border transactions for businesses.

An excerpt from the company’s statement reads:

“Visa B2B Connect takes a different approach, turning weeks into one to two days. The non-card-based platform — the first of its kind — removes friction from the process by expediting transactions directly from the origin bank to the beneficiary bank — no intermediaries necessary.”

According to the company, the newly developed system aims to simplify the process of business payments around the world, eliminating the convoluted transaction flow process involved in interbank settlements for commercial payments.

Kevin Phalen, head of Visa’s Global Business Solutions, hailed the project as one capable of establishing a new paradigm for international business payments. “With Visa B2B Connect, we are making commercial payments quicker and simpler, while enhancing transparency and consistency of data,” Phalen declared.

In the June 11 launch announcement, the company revealed that the Visa B2B Connect platform is now available in 30 markets across the globe. Visa has plans to triple the reach of the service, making the platform operational in 90 markets around the world before the end of 2019.

Details released by Visa show that the platform is a non-card-based network made up of companies and participating banks. It allows businesses to transact directly with one another across the globe via their banks, with the Visa B2B Connect acting as the single connection between all transacting entities.

In a phone interview with Cointelegrah, Marta Piekarska, director of Hyperledger ecosystem at the Linux Foundation, explained the role of the company in the project, saying:

“We [Linux Foundation] provide the base layer on top of which developers can build their projects. Visa has integrated with the Hyperledger Fabric 1.0 to create the B2B Connect platform. They [Visa] partnered with IBM to implement the payment technology infrastructure.”

In legacy interbank transactions, there can be as many as three third-party intermediaries, each with their own fees and contribution to the throughput time of the process. Rather than a settlement occurring in 24 to 48 hours, interbank payments for business can take much longer.

A typical flow process for a payment transaction from Company A in Country Y to Company B in Country Z would look like the image below. 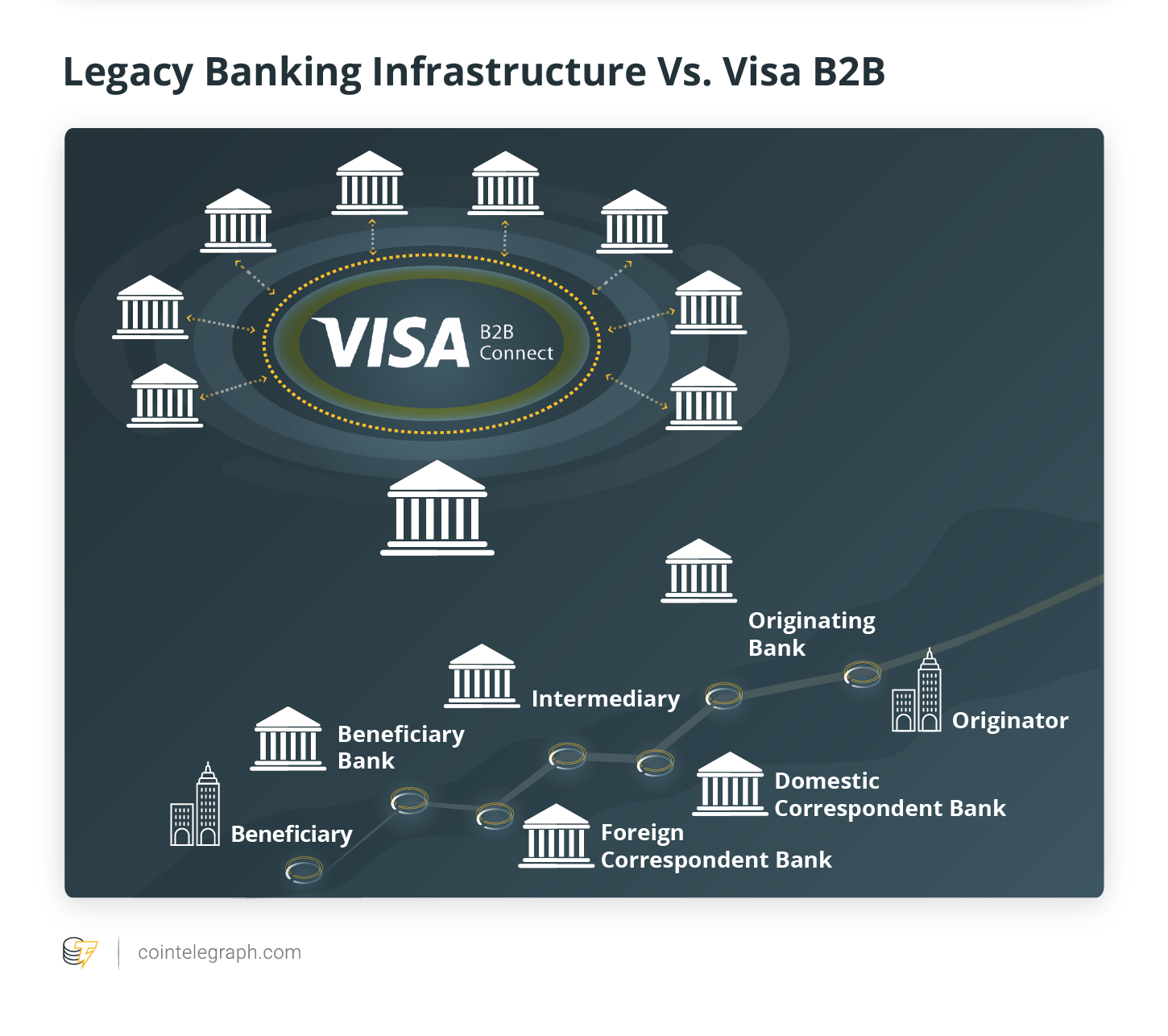 First, the funds move from Company A’s bank to a domestic correspondent bank (the first link in the intermediary chain). The next “handshake” involves a transfer to the main transaction authenticator (the second link in the intermediary chain) — which is most likely a regional clearing house — before arriving at the account held by the foreign correspondent bank in Country Z. Finally, the funds will move to the Company B’s bank account.

The Visa B2B Connect platform eliminates unnecessary handshake procedures and replaces them with a centralized service that connects companies and their banks across the world. Aside from reducing cost and throughput time for interbank payments, Visa says its platform solves the problem of inconsistencies in the flow of data.

By employing elements of DLT, the payments giant believes Visa B2B Connect creates an infrastructure with immutable record-keeping capabilities. If this proves true, participating businesses can utilize the predictable cost matrix inherent in the system to improve upon the accuracy of their cost and budgeting documentation. Furthermore, the system will have all the fee calculations indicated before the commencement of each transaction.

According to Visa, the new service even provides far greater payment flexibility for “one-to-many” business transactions. In such instances, Company A would wish to transfer funds to multiple businesses around the world at the same time. With so many participants involved, the usual flow process would become even more convoluted with a geometric increase in the number of intermediaries and handshakes involved.

However, with the Visa B2B Connect system, the company would need only interface with a centralized platform that handles the disbursement of payments to the receiving entities in the different banks across the globe. Participants will also be able to track the progress of the transactions in real-time, which could vastly improve the transparency of international business payments.

Visa is the latest mainstream actor in the payment processing arena to announce a product that utilizes DLT in its settlement infrastructure. At the start of the year, JPMorgan Chase (JPM) unveiled the launch of its blockchain-based platform for institutional payment settlements.

As reported by Cointelegraph at the time, the U.S. banking giant also plans to launch its own cryptocurrency, dubbed “JPM Coin,” which will serve as a stablecoin facilitator of transactions between major corporations. Reports also indicate that the early iterations of the project will involve internal settlements between JPM clients.

The decision by the Wall Street behemoth struck a chord across the industry, given the sentiments previously espoused by its CEO, Jamie Dimon. Back in 2017, Dimon infamously characterized bitcoin as a fraud.

Apart from JPM, banking giants from Japan, Europe and the U.S. recently launched the Fnality Consortium with a $63 million Series A funding round. Fnality will utilize a system of USCs to facilitate cross-border payments involving many of the major fiat currencies in the world today.

The USC project extends even beyond payment settlement, as it aims to establish a network of blockchain-powered distributed Financial Market Infrastructures (dFMIs). These dFMIs will allow for full-spectrum value exchange transactions.

Much like Visa B2B Connect, the USC project has been four years in the making, and reports indicate that the system will be up and running by mid-2020. Some of the major banks involved in the project include some big companies, as seen below. 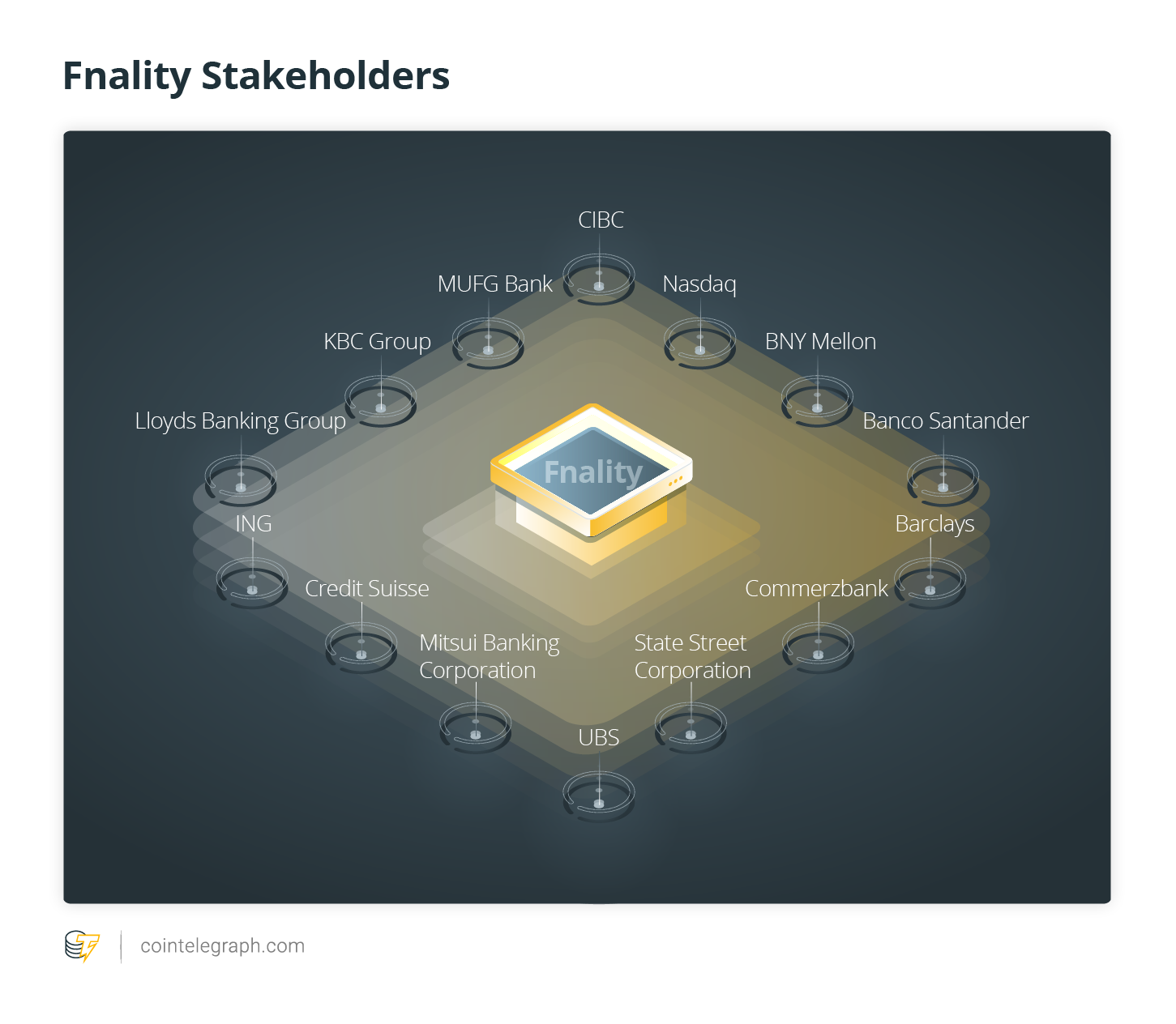 However, not everyone believes that decentralized technology can disrupt the global payments arena. Tweeting on June 14, Henry Blodget, the CEO of Business Insider, maintained that the legacy digital payment systems worked fine and do not need to be replaced with cryptocurrency and blockchain technology. For Blodget, decentralized technology could find some application in cross-border payments, but beyond that, the mainstream avenues were still the more superior technology.

Given the target markets of these newly emerging payment networks, there is a question of whether these projects might constitute serious competition for cryptocurrency startup Ripple. Since it began operations, Ripple has consistently reiterated its intention of becoming the de facto global standard for international payment processing.

Ripple continues to sign partnerships with banks across the globe, encouraging the use of not only its ledger and payment products, but also the XRP cryptocurrency — in so, boosting its utility. With Wall Street banks and major corporations entering the blockchain-based payments arena, Ripple could face increasing competition for relevance in the evolving digital payments arena. It is, however, too soon to say which company will establish dominance when the landscape becomes fully realized.

The question could ultimately be decided by the strength of the technology offered by these different projects. Settlement layers that offer faster, cheaper, more efficient and more secure payment environments should see increased patronage, irrespective of the pedigree of the companies offering the technology.

For example, the Visa B2B Connect platform promises transaction settlement in 24 to 48 hours. This throughput time is significantly slower than that being offered by SWIFT’s Global Payment Initiative (GPI), which settles payments within an average of 24 hours.

On the Ripple ledger, the average settlement time is around four seconds, and it can handle close to 1,500 on-chain transactions per second. Ripple also charges significantly lower fees — even when compared to other blockchain networks — with a median transaction cost of about $0.0004.