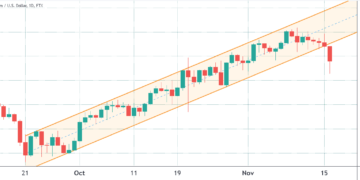 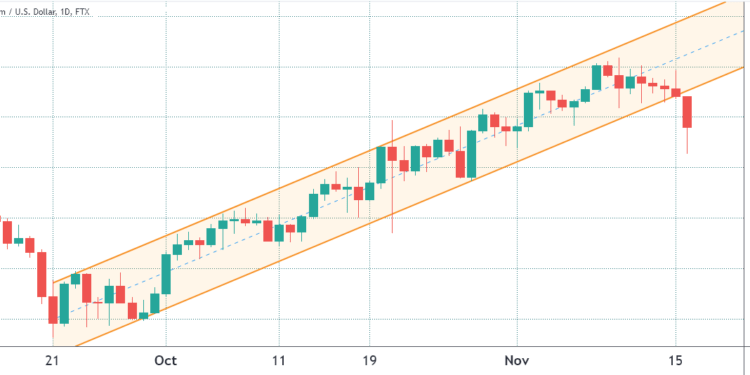 The price of ether (ETH) has dropped by 13 percent today, to $4,100, giving traders a number of reasons to be concerned. According to the chart, the quick pullback appears to have broken a 55-day ascending channel with a target of $5,500.

The Internal Revenue Service must be notified of any digital asset transactions valued at more than $10,000 under the terms of the new legislation. It is yet unclear whether this will apply to individuals and firms who are developing blockchain technology and digital wallets in general.

VanEck’s request for an exchange-traded fund to hold spot Bitcoin was also refused by the Securities and Exchange Commission of the United States on November 12, according to the SEC’s website. There were “fraudulent and manipulative activities and procedures,” according to the authority, as well as a lack of transparency with regard to Tether’s (USDT) stablecoin.

Today’s liquidations were not significant

However, while the surprise rise in the price of ETH resulted in the liquidation of $200 million worth of leveraged long futures contracts, the open interest on Ether’s futures exchanges remains solid.

Take note of the fact that the current $11.9 billion in perpetual and quarterly futures contracts is a 37 percent increase from the previous $10.7 billion two months ago. In any derivatives contract, the number of leverage longs (buys) and shorts (sells) is equal at all times, regardless of the market conditions.

One should begin by examining the futures premium, also known as the basis rate, in order to ascertain whether or not experienced traders are inclined to be pessimistic. This indicator indicates the difference in price between the prices of futures contracts and the prices of conventional spot market commodities.

Whales and arbitrage desks prefer to trade ether’s quarterly futures contracts because they are the most liquid. The fact that derivatives do not have a variable funding rate, despite the fact that their settlement date and price difference from spot markets appear to be confusing for retail traders, is the most major advantage of using them.

It is customary for the three-month futures to trade with an annualized premium ranging from 5 percent to 15 percent, which is seen as an opportunity cost for arbitrage trading. Sellers increase their demand for a higher price as a result of delaying settlement, which results in the price discrepancy.

As shown in the chart above, Ether’s climb beyond $4,000 on October 21 prompted the basis rate to reach the 20 percent mark, indicating that buyers were using undue leverage in their purchases. After fluctuating between 14 percent and 20 percent for three weeks, the indicator has declined to the present level of 12 percent.

Despite the fact that the base rate remains neutral to positive, it indicates that some purchasers’ excess heat has been extinguished, which is simply a form of healthy purification. Because of the jarring impression created by the ascending channel break, Ether traders should treat the data from derivatives as a brief time of reprieve.

PARSIQ's Contribution to the World of Blockchain Transactions