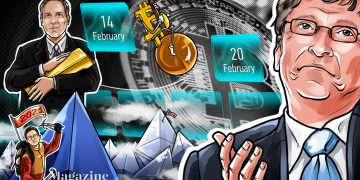 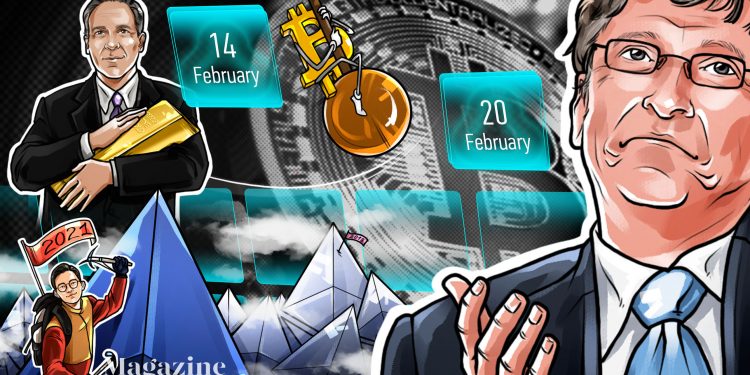 Bitcoin’s price continued to smash records this week, surging by more than 20% and hitting highs of $57,505.23 at one point. But the most significant milestone came when BTC’s market cap exceeded $1 trillion for the very first time.

This is a feat that took the likes of Amazon and Google decades to achieve, with Bitcoin cementing its status as a major global asset in just 12 years. BTC even managed to overtake Tesla and Tencent as bullish momentum shows no signs of slowing down.

Recent historical data suggests that Bitcoin rallies in 2021 have tended to occur on weekends, and many analysts believe the world’s biggest cryptocurrency could attack the $60,000 level as the weekend progresses.

BTC has outshone Ether over the past seven days, which has clocked gains of just 10% by comparison. ETH has been struggling to smash through the $2,000 barrier in recent days but did manage to break through this threshold on Monday.

BTC’s surge came as MicroStrategy upped the ante in its aggressive acquisition spree, announcing that it is selling $900 million in convertible senior notes to institutional buyers so it can “acquire additional Bitcoin.”

Should the purchase go to plan, the business intelligence firm will hold more than 90,000 BTC in its reserves, and control 0.48% of Bitcoin’s circulating supply.

MicroStrategy’s spending splurge began back in August 2020, when it purchased 21,454 BTC for $250 million — a price of about $11,650 per coin. At the time of writing, this stash alone will have generated a paper profit of $950 million. Two further bulk buys occurred in September and December.

This week’s drama has led to a rather radical shake-up in the crypto rankings. Binance Coin is now the third-largest cryptocurrency by market cap for the first time in history.

BNB’s price has more than doubled this week, and at one point, the coin hit highs of $342.88. It was issued by Binance, one of the world’s largest crypto exchanges, with a view to giving users discounted fees.

The surge comes amid the success of PancakeSwap, a decentralized exchange based on the Binance Smart Chain. The platform overtook Uniswap as the largest DEX by trading volume this week.

Binance’s chief executive officer, Changpeng Zhao, noted that BNB has also been setting new all-time highs against Bitcoin. He said: “From a humble 0.00001 BTC per BNB, we have grown 480x against BTC in the last three-and-a-half years.”

Over $100M in crypto collectible NFTs sold in last 30 days

Nonfungible token sales have been booming, with sales of crypto collectibles over the past 30 days surpassing $100 million in value.

NBA Top Shot represented the lion share of NFTs sold, with CryptoKitties, the platform that started it all, enjoying a 305.92% surge in sales over the past month.

This week, a unique Spiderman drawing by Marvel Comics artist Adam Kubert sold for 12.75 ETH ($25,387) after being converted into an NFT. Christie’s also announced plans to auction its first-ever “purely digital work of art.”

But there are concerns that the NFT frenzy is turning into a bubble that’s fit to burst. Litecoin founder Charlie Lee has predicted that NFT prices will eventually crash because tokens lack the legitimate scarcity of “real art.”

He warned: “Because of the near zero cost to create another NFT, the market will eventually be flooded with NFTs from artists trying to cash in on this craze. Supply will overwhelm demand and the prices will eventually crash.”

The loud, unmistakable bark of DOGE has turned into a whimper this week, with prices falling by 19% over the past seven days.

Dogecoin sank by 23% in a matter of hours on Monday after Elon Musk drew attention to the vastly unequal distribution of DOGE tokens — and urged major holders to sell.

Dogecoin has one of the most unequal coin distributions in the cryptocurrency space, with 28.7% being held by just one person and the top 12 holders possessing almost 50% of the supply.

Disgruntled by this statistic, Tesla’s CEO tweeted: “If major Dogecoin holders sell most of their coins, it will get my full support. Too much concentration is the only real issue imo.”

It’s worth noting that it’s unlikely this pullback wasn’t just down to Musk’s missives. There was an enormous pullback across the altcoin markets as the week began, with Bitcoin’s push to a new all-time high sucking volume out of smaller coins.

“I think that now, after all the hacks we’ve had, we basically understand that if you have two audits, three audits, it doesn’t mean you’re safe.”

“The amount of consolidation Bitcoin has seen since January is unreal. It really allowed fundamentals to catch up and indicators to reset. Looks like $48k is the new $35k now.”

“While Bitcoin may very well continue to be volatile in the short term, we think it has 10x potential from today’s levels over the long term as part of a diversified portfolio.”

“North Korea’s operatives, using keyboards rather than guns, stealing digital wallets of cryptocurrency instead of sacks of cash, are the world’s leading bank robbers.”

“Cryptocurrency-related crime is falling, it remains a small part of the overall cryptocurrency economy, and it is comparatively smaller to the amount of illicit funds involved in traditional finance.”

“Finance leaders who are tasked with ensuring financial stability are not prone to making speculative leaps into unknown territory.”

“Because of the near zero cost to create another NFT, the market will eventually be flooded with NFTs from artists trying to cash in on this craze. Supply will overwhelm demand and the prices will eventually crash.”

“If major Dogecoin holders sell most of their coins, it will get my full support. Too much concentration is the only real issue imo.”

The Motley Fool has announced that it will invest $5 million into BTC and predicted that Bitcoin will rise to $500,000 in the next 15 years.

The financial and investment advisory giant says it will be buying Bitcoin directly rather than gaining exposure to “overpriced ETFs.”

Setting out the three core reasons behind its purchase, The Motley Fool said Bitcoin is a better store of value than gold, it’s an effective hedge against inflation, and it has the potential to become a transactional asset.

The company added: “While Bitcoin may very well continue to be volatile in the short term, we think it has 10x potential from today’s levels over the long term as part of a diversified portfolio. We plan to hold this Bitcoin investment for many years.”

The president of the Federal Reserve Bank of St. Louis seemingly doesn’t understand why many are looking to cryptocurrency as a medium of exchange instead of a uniform currency like the U.S. dollar.

Speaking to CNBC, James Bullard was bullish on the dollar’s prospects and said the greenback won’t be affected by Bitcoin or gold.

Bullard also warned that private currencies aren’t able to maintain a stable value against goods and other currencies, nor is their future supply “at all clear.”

The U.S. Department of Justice has announced charges against three North Korean hackers.

Assistant Attorney General John Demers didn’t mince his words when he made the announcement, declaring: “North Korea’s operatives, using keyboards rather than guns, stealing digital wallets of cryptocurrency instead of sacks of cash, are the world’s leading bank robbers.”

With a country largely sequestered from the international economy, North Korea’s hacking program has been a critical source of revenue.

Many have linked hacking income from sources like the WannaCry malware and crypto exchange Coincheck with the nuclear weapons program.

Spare a thought for this Honda enthusiast, who has called himself an “idiot” after spending 30.5 BTC on two used cars back on Valentine’s Day in 2017.

Chris Cut thought he was getting a “great price” of $30,500 back then, given how BTC was trading at $1,000 per coin. But fast forward to today, and his crypto stash would have been worth more than $1.7 million.

The YouTuber said that he wasn’t bothered about paying in Bitcoin for the cars at the time — but the enormity of his lost gains have set in four years later.

He said: “I started doing some math and it made me kick myself in the ass and I feel pretty depressed.”

Cut later added: “I obviously have regrets about that because I can buy a lot of NSXs today for that price. […] Essentially I turned 37 Bitcoins into 2 Bitcoins.”

Ethereum joins the $200 billion club — But is it worthy?

Beeple — whose digital creations are going under the hammer at Christie’s — thinks that NFTs are “the start of the next chapter in art history.”

Algorithmic stablecoins aren’t really stable, but can the concept redeem itself?

Amid much fanfare, many algorithmic stablecoins have not been stable. Is the problem intractable, or is it just the algorithms that aren’t good enough?