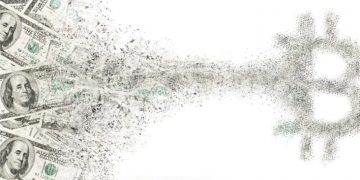 
The still existing correlation between Bitcoin and the S&P 500 could soon haunt the market for cryptic currencies again, when a shockingly accurate sell signal sends the major U.S. stock index back down to the lows of Black Thursday.

Could the correlation do the same for the very first crypto currency?

Before the historic slump on Black Thursday, the S&P 500 and many major stock indices set a new record. Before the end of the quarter, however, a record was set for the worst quarterly results in the history of the stock markets.

At the same time that the S&P 500 peaked, Bitcoin was trading above $10,000 – a key level that is described as the remaining resistance between current levels and another test of the asset’s all-time high in 2017.

The collapse of Black Thursday, which shattered the S&P 500, also caused Bitcoin to drop from $10,000 to below $4,000. There was no escape from the liquidity crisis as the investor community realized that a recession as a result of the pandemic was more than likely.

Since then, there has been a strong correlation between the S&P 500 and Bitcoin. Both the main US stock index and the leading crypto currency in terms of market capitalization have made a strong, V-shaped recovery – a sign that often indicates a bottoming out.

Is the upswing in these two markets sustainable through impulses?

However, fears of a false bottom are mounting and an accurate sell signal generated at the S&P 500 could trigger another test of the lows from Black Thursday or worse. And because of the correlation that Bitcoin continues to share with the index, any downward movement in the stock market could once again spill over to the crypto currency.

While all this has helped the S&P 500 and Bitcoin to recover from the lows, it may not be enough to keep the markets afloat in the long run. The uncertainty surrounding any plans for economic reopening is making investors skeptical about returns, and fears of inflation are causing investors to rethink their investments.

This could benefit Bitcoin as the asset is increasingly seen as a hedge against inflation, like gold, but for the time being the crypto currency remains more correlated with equities than the precious metals market. To make matters worse, the TD Sequential indicator has issued a sell signal of 9 for the S&P 500. This incredibly accurate signal worked well in crypto markets, but was designed by traditional market timing wizard Thomas Demark.

If the build-up is confirmed and the S&P 500 unloads, BTC could run into difficulties.

Bitcoin breaks through an important hurdle: Here’s why it could revisit $10,000