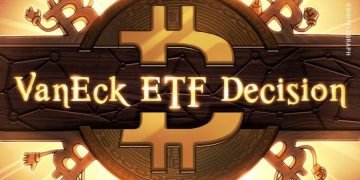 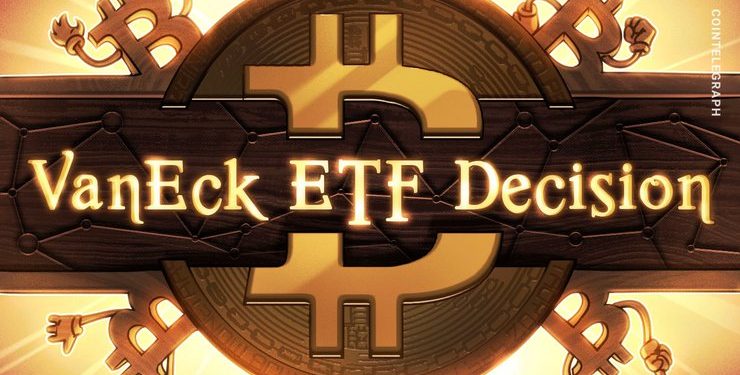 Yesterday, the United States Securities and Exchange Commission (SEC) postponed its decision on the VanEck/SolidX bitcoin (BTC) exchange-traded fund (ETF) proposal, signaling that the regulator is still not ready to see crypto-based funds being traded on regulated exchanges.

However, while the general sentiment is that the agency will continue to push back, there’s a slight chance that a crypto ETF might come as soon as later this year.

What’s an ETF and how can it affect the crypto market?

In short, an ETF is a type of an investment fund that is tied to the price of an underlying asset — a commodity, an index, bonds or a basket of assets — like an index fund and is traded on exchanges, available to both retail and institutional investors.

A bitcoin ETF, in turn, would track BTC as the underlying asset. It is an indirect way of purchasing BTC, where the investor only holds the corresponding security without having to store the actual coins. If listed on a regulated U.S. exchange, an ETF could pave the way for large institutional investors, and hence push bitcoin — and cryptocurrencies in general — toward a broader recognition by the Wall Street.

Indeed, that’s what the investment firm VanEck and a blockchain development company SolidX have been trying to achieve for almost a year now — listing a bitcoin ETF on the Chicago Board of Exchange’s (CBOE) BZX Equities Exchange, the second-largest equities market operator in the U.S.

Both VanEck and SolidX had tried to register their ETF separately beforehand — in August 2017 and in July 2016 respectively — but the SEC shut down their attempts.

After the parties had teamed up in June last year, their collaborative effort has been generally considered to be one of the industry’s strongest bets to secure a bitcoin ETF. More specifically, the fund is tied to VanEck’s subsidiary index, MVIS. The index will calculate the real-time price of BTC derived from the information that will be collected from the U.S.-based crypto over-the-counter (OTC) markets, and not the conventional crypto exchanges.

Unlike the Winklevoss Brothers’ ETF attempt (and many other ETFs that the SEC has rejected in the past), the VanEck/SolidX fund puts additional emphasis on insurance: It is reportedly derivative-backed, which means that the firms will actually hold BTC. This will allegedly protect investors against the loss or theft of the digital assets.

Each share of the VanEck/SolidX bitcoin trust is set to cost $200,000. As SolidX CEO Daniel H. Gallancy has explained to CNBC in the past, the price is set at a higher rate to attract more institutional, rather than retail investors.

Delay streak: history of VanEck/SolidX’s ETF filings with the SEC

VanEck/SolidX’s ETF originally filed a bid to the SEC on June 6, 2018 by CBOE. On Aug. 7, the agency postponed the case until Sept. 30. In the accompanying notice, the SEC revealed that it had received more than 1,300 comments on the application at the time.

Then, on Sept. 20, the SEC requested further comments regarding its decision on the VanEck/SolidX ETF. The agency explained that it had not “reached any conclusions with respect to any of the issues involved,” and hence was seeking comments on 18 key issues, including commenters’ opinion on BZX’s assertions that BTC “is arguably less susceptible to manipulation than other commodities that underlie exchange-traded products (ETPs),” as well as SolidX’s assertion that “the OTC desks have a better measure of the market than any exchange-specific reference price,” among others.

In October, newly appointed SEC Commissioner Elad Roisman, who stepped into office a month earlier, met with representatives from VanEck, SolidX and CBOE to discuss the prospect of having a bitcoin-based ETF on the market, according to the agency’s documents.

Nevertheless, on Dec. 6, the SEC delayed its decision yet again, pushing the deadline to February 2019. This marked the watchdog’s last opportunity to delay the application as per its own rules. Available postponements are served in two increments: one six-month delay, and a further and final three-month delay, which makes nine months in total, meaning that the application would have to be either rejected or approved by that time.

However, on Jan. 22, 2019, CBOE temporarily withdrew the proposition, citing the U.S. government shutdown, which froze the SEC’s activity while the end of the review period was approaching. The application was resubmitted by the end of the same month.

On May 20, the SEC delayed its decision yet again. Specifically, the watchdog added a 35-day period for gathering more information and opinions on the proposal and asked the public to weigh in on 14 questions, which will allegedly help the governing body reach a verdict:

“The Commission is instituting proceedings to allow for additional analysis of the proposed rule change’s consistency with Section 6(b)(5) of the Act, which requires, among other things, that the rules of a national securities exchange be ‘designed to prevent fraudulent and manipulative acts and practices, to promote just and equitable principles of trade,’ and ‘to protect investors and the public interest.’”

Was another delay to be expected?

The SEC — being the agency that gets to decide if the industry is ready for a bitcoin ETF — has been rejecting and postponing crypto ETFs since 2017, when it first turned down the fund proposed by the Winklevoss brothers, after taking as many as four years.

While there is always a possibility that the agency will finally agree to grant a crypto ETF, the odds seem to be against such a decision. As the history of SEC rejections shows, one of the regulator’s main concerns has been market manipulation, and the recent Tether scandal would hardly seem as a convincing argument that the crypto market is fully transparent.

Thus, securities lawyer Jake Chervinsky, who has been actively covering bitcoin ETF proposals on his Twitter, argued that there was a 0.1% chance that the VanEck/SolidX ETF would get approved on May 20.

“I’d be shocked if the SEC approved the first ever bitcoin ETF after six years of denials without taking all the time allowed by law,” Chervinsky wrote. “Moving slowly makes the SEC appear thoughtful & thorough.”

Notably, the SEC’s decisions on crypto ETFs has correlated with price movement of crypto in the past. For instance, when the regulatory body postponed its decision on VanEck/SolidX ETF in August last year, the market took a major swing: After solid growth to break above the $7,000 earlier that day, BTC value shed around $500 in just six hours, while Ripple-developed XRP, for instance, lost as much as 23% of its value.

This time, however, the market has responded in a calm fashion: As of press time, the majority of cryptocurrencies have moved no more than 1-2% in either direction, although some market analysts predicted a pull back.

The SEC’s position on bitcoin ETFs is not radical by any means. Notably, the winds turned in July 2018, when the SEC’s regular rejection of the Winklevoss brothers’ application for a bitcoin ETF came with a silver lining.

Soon after the agency announced its decision, SEC Commissioner Hester M. Peirce issued a statement in which she argued that the agency’s move “sends a strong signal that innovation is unwelcome in our markets, a signal that may have effects far beyond the fate of Bitcoin ETPs.” Further, she claimed that the agency overstepped “its limited role” because it focused on the nature of the underlying BTC market instead of the derivative itself.

A further wave of hope was delivered in February this year, when a supposedly leaked interview with SEC Commissioner Robert J. Jackson Jr. surfaced on Twitter. In it, Jackson allegedly stated that he expects his agency to license a bitcoin ETF sooner or later:

“Eventually, do I think someone will satisfy the standards we’ve laid out there? I hope so, yes, and I think so.”

Later in February, Brian Quintenz, a commissioner at the Commodities and Futures Trading Commission (CFTC), criticized the SEC for having dismissed previous ETFs on the grounds of potential price manipulation. Speaking at the BiPartisan Policy Center in Washington, D.C., Quintenz declared:

“There are mathematical ways through a settlement index to design a contract where even if there isn’t a lot of liquidity on one exchange referenced, the index itself is not readily susceptible to manipulation.”

Nevertheless, the SEC’s most recent decision shows that the agency is not ready for bitcoin ETFs. “It is clear the SEC is still in information-gathering mode,” Dave Nadig, the managing director of ETF.com, a leading authority on ETFs, told CNBC yesterday. “Technically, there are deadlines, but honestly they [the SEC] can do what they want, they can kick this down the road until they are comfortable, it is clear from what we are hearing.”

Thus, the new deadline for a VanEck/SolidX ETF decision is August 19 — however, as Chervinsky notes, the SEC “can & likely will delay one more time for a final deadline of October 18.”

The crypto industry is not giving up, however. Recent documents released by the SEC show that the watchdog is currently reviewing another ETF proposal that includes both bitcoin and ether (ETH). Meanwhile, time might actually be on crypto industry’s side, given the market’s ongoing recovery from a crypto winter and highly desirable mainstream adoption.