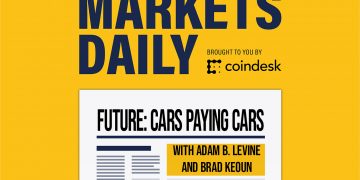 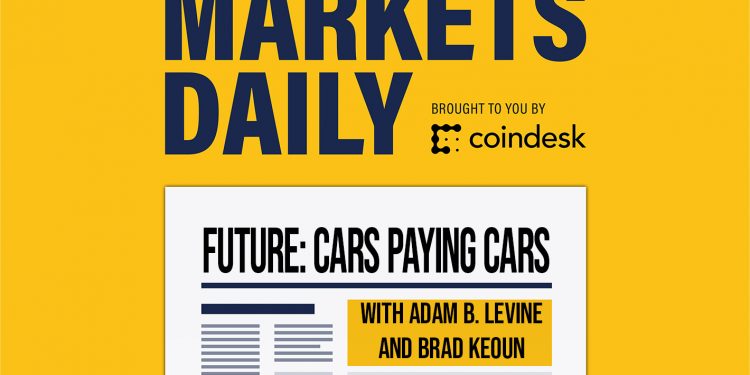 With geopolitical events reverberating and bitcoin continuing its upward trend, CoinDesk’s Markets Daily is back with news and analysis.

On Today’s episode, International and Industry News Roundup, Cars paying each other for right of way and a new report on Crypto Liquidity

It’s JANUARY 8, 2020, and you’re listening to Markets Daily, I’m Adam B. Levine, editor of Podcasts here at Coindesk, along with our senior markets reporter, Brad Keoun, to give you a concise daily briefing on crypto markets and some of the most important news developments in the sector over the past 24 hours.

Brad Keoun: Bitcoin’s price has hit a seven-week high of $8,463 during Asian hours after Iran launched missile attacks at two U.S. military bases in Iraq. So far, no casualties have been reported.

Trade is off a bit in the past several hours as Iran’s foreign minister said it had concluded its attacks and that it did not seek an escalation of war. But markets were also keeping an eye on the crash of a Ukraine International Airlines flight that took off from Tehran early Wednesday, killing more than 170 people. Iranian news services have reported the crash was due to technical failure by the Boeing plane.

For crypto markets, investors are continuing to watch to see if bitcoin’s correlation with gold, a typical safe-haven asset in times of geopolitical and economic turmoil, will continue to strengthen

Adam: Bloomberg Intelligence Senior Commodity Strategist Mike McGlone writes in a Crypto Outlook report that bitcoin is QUOTE winning the adoption race END-QUOTE partly because of its store-of-value properties, at a time when the market environment favors independent quasi-currencies.

He predicts bitcoin prices could track upward with gold this year, potentially edging toward last year’s high around $14,000.

The first-born crypto is winning as it evolves into a digital version of gold, McGlone writes.

Brad: And in news on what could be the world’s biggest bitcoin mine, Whinstone’s planned $150 million facility in Rockdale, Texas, has reportedly signed up two Japanese corporate customers.

SBI Holdings and GMO have agreed to rent mining capacity at the facility, with operations set to start in the coming months, Bloomberg News reports.

CoinDesk reported in November that the bitcoin mine would have an initial power usage of 300 megawatts, expanding to 1 gigawatt, dwarfing a nearby facility built by Bitmain, the giant Chinese maker of bitcoin-mining computers.

Adam: Turning to regulatory news, a unit of the U.S. Securities and Exchange devoted to inspections and examinations has released its list of top priorities for 2020, and digital assets are ranked as an “area of concern.”

The SEC office says it wants to address the investment suitability of digital assets, along with trading practices, fund safety, pricing and the effectiveness of compliance programs.

The SEC office noted that the market for digital assets has grown rapidly, and might present risks for retail investors who don’t understand the differences between crypto and more traditional financial products.

Brad:  And finally, crypto is coming to the courtroom.

CoinDesk’s Paddy Baker reports that the Swiss-based crypto project Aragon has started recruiting jurors ahead of its planned launch of a new decentralized court system.

Starting on Tuesday, participants in the Aragon project could exchange their ANT tokens for newly minted Aragon Network Juror Tokens that can then be used to sign up to serve as jurors in disputes adjudicated in Aragon’s courtroom.

Jurors who serve are eligible for rewards paid out in – you guessed it, more tokens.

Adam: Turning to today’s featured segment, we’re talking Sony, cars and crypto.  The CoinDesk team has been in Las Vegas all week for the annual Consumer Electronics Show – better known as CES. Here’s what we know, according to CoinDesk Editor John Biggs.

There is a school of thought that believes the future of cryptocurrency and blockchain happens when robots begin paying robots. These robots might be cleaning our houses, taking care of our elders or driving us around. Cryptocurrency becomes the value transfer medium in this scenario and all of the sensors, computers and systems associated with washing our floors or getting us around connect to the worldwide internet of value and, in the end, supplant most payment methods.

Car manufacturers probably won’t play ball. Car sales and car manufacturers depend on a few things, the primary one being that a human will buy an expensive hunk of steel and spend quite a while behind the wheel. Sony and Apple and Intel and countless mobility startups aren’t harnessed to that antiquated notion. To them, cars are computers.

So, it did not go unnoticed when…

Sony announced a car – a real, physical vehicle with wheels and seats. Obviously, this car, called the Vision-S, is a prototype and you probably won’t be going down to Best Buy to pick up some USB-C cables and a new Sony whip. But the simple fact remains that an electronics and software company is moving into real-world mobility.

The Sony car is packed with sensors – lidar, radar and cameras – and 360-degree audio with a huge, wraparound screen to entertain the driver. It is, in short, the beginning of a car-creation model that pulls the industry out of the 1900s and into the 2000s.

The electric vehicle is built on Sony’s own platform, which it plans to use in multiple body configurations. It has a reported zero-to-60-mph time of 4.8 seconds, according to Car and Driver, and a max speed of 149 mph. It’s a real car with real power.

We know very little about Sony’s future car plans and the concept model is far from ready for the market. But eventually, this car and many like it will be communicating with each other wirelessly and negotiating traffic automatically. Your wallet will take a hit if you want to get somewhere faster  —  your car will pay another car to get ahead of them  —  and you’ll spend or even earn if you can spare a few more minutes on the road. Roads themselves will request tolls for maintenance and, as we sit in relative comfort, we’ll be making requests for applications, educational materials and entertainment. And, if Facebook, Apple and Amazon have their way, we won’t be swiping a credit card.

All of this assumes Sony and Apple and Google and Amazon are all thinking the same thing. Thus far, it seems they are. They are computing companies. Computing is built on open standards, and anything traditional car manufacturers do to prevent that openness will earn them a spot outside of the network. The new driverless, self-negotiating cars will also face driver resistance. Maybe we’ll have a future where petulant car lovers boast they are both “rolling coal” and “rolling meat” by driving their antiquated vehicles manufactured before, say, 2025. But anything that stands in front of the onslaught of driverless, constantly negotiating vehicles will be run over.

In the end, maybe this Sony car is a random pop on the future’s horizon. Or maybe it’s something else: the beginning of a firework show that will truly take this extremely nascent technology mainstream. All we can say right now is people are excited about what’s to come.

Adam: And now, for today’s spotlight, we’re looking at the evolving concept of liquidity, in the rapidly evolving cryptocurrency markets.

Brad: That’s right, Adam, today we want to highlight a really smart report out this week from our colleagues on the ColnDesk Research team, Noelle Acheson and Galen Moore, looking at liquidity in crypto markets.

Liquidity is one of those market terms that gets tossed around frequently by analysts, and crypto markets have idiosyncrasies that make liquidity an even more complicated subject than in traditional markets.

In this context, the authors looked at liquidity as a measure of, generally speaking, how easily a given crypto asset can be bought or sold in a reasonably large quantity without moving the price much.

Bitcoin, the oldest cryptocurrency and the largest by market value around $150 billion, is by far the most liquid, according to the authors, and most crypto investors can enter and exit a reasonably sized position with relative ease.

Yet, as we have often seen, a large order can whiplash the price.

One key issue is that these markets are quite fragmented, with a handful of large exchanges operating in several jurisdictions, alongside medium-size regional exchanges and hundreds of other niche exchanges geared toward specific types of traders.

That spreads trading volumes across a range of venues, diluting the liquidity.

The contrast is with traditional financial markets, where there tend to be fewer exchanges to choose from, so there’s less liquidity dilution.

A more diluted trading volume makes it harder to execute a large order without affecting the price.

To place a big order without moving the price, a client may need to use various exchanges, resulting in higher costs, and that could serve as a barrier for some investors from accumulating a large trading position.

A thriving over-the-counter, or OTC, market has sprung up to solve these problems, but there’s not an abundance of reliable data on how much volume these OTC desks account for.

Another key aspect of liquidity in crypto markets is the role of stablecoins, or digital assets like Tether whose price is pegged to government-issued currencies such as the U.S. dollar.

These stablecoins can be moved rapidly from exchange to exchange, allowing investors to reduce the balances they have to hold at individual exchanges, and thus reducing their cost of capital.

The authors conclude that the unusually fragmented structure of crypto markets thins order books, increasing the cost of trading by requiring traders to execute across a range of exchanges or by pushing large orders onto the OTC market.

But they make the point that crypto infrastructure is evolving rapidly to overcome liquidity obstacles.

Those could include market consolidation as well as the growing use of prime brokers, which cater to hedge funds with brokerage services and trading loans, as well as with enhanced data reporting and metrics analysis.

There’s also the possibility that simply the entry of more money into crypto markets might do the trick.

According to the report, more liquidity could come from greater mainstream interest in crypto assets, perhaps triggered by the upcoming “bitcoin halving” in May or by the emergence of liquid derivative markets for a broader range of investors.

This could bring fresh demand for cryptocurrencies, accelerate the compression of trading bid-offer spreads and trigger the introduction of further liquidity-enhancing measures.

What’s more, growing liquidity generally tends to reduce volatility, which in turn might lead to even more liquidity.

Adam: Join us again on Thursday for the next Markets Daily from CoinDesk.  To make sure you never miss an episode, you can subscribe to Markets daily on Apple Podcasts, Spotify, Google Podcasts, and just about any other place you’d like to listen.  If you’re enjoying the show, we really appreciate you leaving a review. And if you have any thoughts or comments, email [email protected]