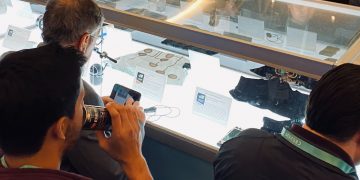 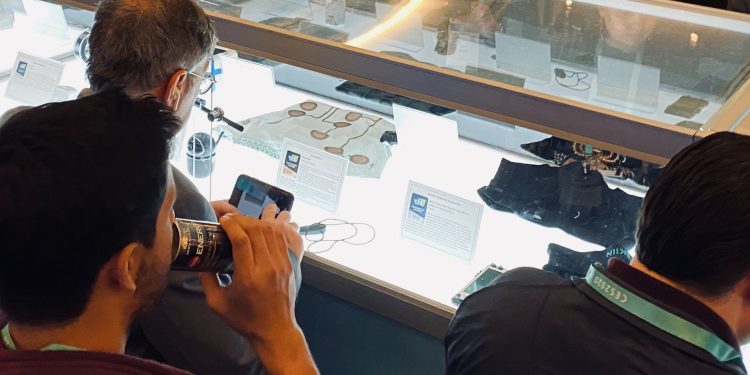 LAS VEGAS – In tech there’s an old adage: “hardware as hard.” It’s much easier to prototype and test a product when a mistake can be fixed by deleting and rewriting a few lines of code.

At the Consumer Electronics Show (CES) in Las Vegas this week, though, two crypto companies are leading with atoms rather than bits, and it seems to be working.

Their products won “CES Innovation Awards” and coveted spots at the gadget showcase, where hordes of people pour through the Sands Expo Center.

We first encountered Pundi X at CES when speaking MakerDAO in the “Digital Money” section. The MakerDAO Foundation was showing off its integration with the XPOS point-of-sale system, a device that Pundi X made to both sell crypto and also for merchants to accept crypto as payment.

XPOS isn’t what earned Pundi X plaudits at CES, though. Instead it was “Blok On Blok” (BOB), its blockchain phone, which got recognized in the trade show’s Mobile Devices & Accessories category.

‘”We want to offer the user an option to control their data,” Pundi X’s Soohan Han told CoinDesk at the company’s booth.

Han said that the point of the BOB phone is to give users confidence that their communications really aren’t being monitored. He also promised the phones’ ability to bypass censors. For example, the United Arab Emirates blocks VoIP, but Han said he was able to get past it with his BOB phone on a visit there.

The phone runs on Pundi X’s own f(x) blockchain (the company is also, incidentally, planning to move XPOS to its own blockchain, though it was built for ethereum).

The BOB phone is able to switch back and forth between Android mode and an Android fork built for blockchain usage that’s ready to support dapps. Similarly, the Sirin Labs phone supported dapps, but it did not run on an operating system designed around blockchain.

Han said the aim for Pundi X is to create a third operating system, one that other telephone companies will build phones for.

“There isn’t any decentralized operating system out there. We want to offer (f)x OS to give people a way to control their data if they want to,” Han said.

Han said they expect to target the tech-centric and security-conscious with this mobile device. Super privacy-conscious users might be somewhat skeptical of an operating system built on Android, but there are few options out there.

One non-blockchain offering built on open source software is the Librem 5 by Purism, which runs PureOS, based on Linux. The Librem has physical switches that disconnect the device’s camera and microphone so a user can really know they aren’t working.

Pundi X raised $30.5 million in a 2017 ICO, according to Binance, which has been used to build and deploy XPOS. Its phone, BOB, is available now on Indiegogo for pre-order as low as $554. Han expects the phone to ship this year.

Similarly, “Internet of Trusted Things” startup IoTeX was showing off its Ucam device, a home security camera that shares footage to the cloud, but it isn’t actually branded as IoTeX.

“Our company is a blockchain platform, and we are working with other IoT and hardware manufacturing companies to make private and secure IoT devices,” IoTeX’s Dorothy Ko explained.

Instead, a company that’s been building cameras for years, Tenvis, will build and offer the device. The product earned CES 2020’s recognition in the Cybersecurity & Personal Privacy category.

“This is a hyper-saturated market,” IoTeX Head of Business Development Larry Pang told CoinDesk. “Tenvis came to us looking for the next feature, and that’s privacy.”

Ucam footage will be viewable through a mobile app and that app will hold the private key for everything it captures. That way, even if the user decides to store the data in the cloud, the cloud service provider won’t be able to view it.

The app can handle one or several cameras.

Video can be held on board the camera on an SD card, stored in the cloud or even on IPFS, though cloud storage of any kind is likely to incur a fee. IoTeX will offer that service but the price isn’t set yet, Pang said. If the user just holds it locally there will be no additional charge.

“We really want to give people the ability to have privacy and a great user experience,” Pang said. Ucam will retail at $50 when it comes out, he added.

Neither company wants to devote itself to making hardware.

“The good thing about this is all the cameras you see on the [CES] floor today can ultimately be powered by IoTeX,” Pang explained. His company is working from a platform-as-a-service model.

They’d like to see IoTeX running various indoor and outdoor cameras by various brands, all connected to one app and a private key controlled by the owner.

IoTeX was able to bypass the hardware execution process by partnering with an existing company that already had it down.

That said, Pundi X really is making a phone itself. In fact, the phone will come in a giant box and require some assembly by users, in order to open up the option of modularity to the device. It will even be possible to 3D-print parts for the phone.

The showcased BOB in the image above isn’t really the phone design. It’s a heavily modded design, showing off how a phone could showcase personality.

Han offered that Pundi X was probably one of the first movers in crypto into hardware. “Our business is not really just hardware,” he said. “The hardware is really just a byproduct of how we introduce the solution.”

That said, Pundi X doesn’t expect this to be a big run of phones. Han said that someone had to go first but they hope to see more companies building on the f(x) operating system in the future.

“We are not a phone company,” he said.