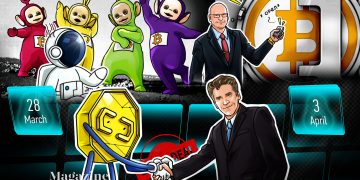 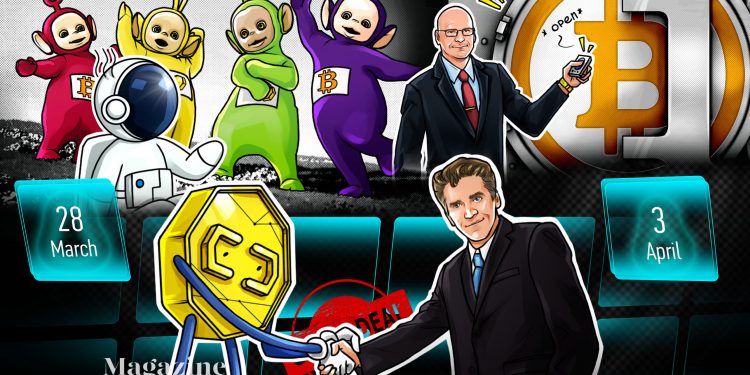 Altcoins have been in the driver’s seat this week, with Ether breaking $2,100 for the very first time — besting the ATH of $2,036 that was set on Feb. 20. Curiously, several coins belonging to so-called “Ethereum killer” blockchains have been thriving, too.

ETH’s price broke out against Bitcoin for the first time in 23 days on Thursday, not long after credit card giant Visa announced it was piloting a program that will allow its partners to use Ethereum’s blockchain to settle transactions made in fiat.

Traders have now become exceedingly bullish on Ether’s prospects and are expecting more upside in the short-term, with $2,500 now in play. In particular, there’s interest in the price activity we could expect in June and July when a major improvement proposal called EIP-1559 is set to overhaul Ethereum’s existing fee structure.

The celebratory atmosphere following ETH’s all-time highs was dampened as the gas fee crisis rumbles on. The cost of using this blockchain has surged 77% in recent days, taking the average fee to an eye-watering $22.97.

Bitcoin may be struggling to find its footing above $60,000 right now, but at least we can take succor in how well the cryptocurrency has performed so far this year.

Despite March being a historically dreary month — with losses in six of the past nine years — BTC delivered gains of 29.84% over this 31-day period. Better still, we’re now heading into April, where BTC has only suffered negative returns twice since 2013.

Across the first quarter of the year, covering January to March, Bitcoin also gained 103%, clocking up the best performance in eight years.

Traditionally, Q2 is the strongest time of the year for Bitcoin — with only two years seeing negative returns, both under 10%. Bulls will now have their sights set on surpassing the gains of 159% seen between April and June 2019.

In other upbeat developments, BTC has just closed six consecutive monthly green candles for the first time since April 2013, and should history repeat itself, we could see further parabolic gains this year.

Bitcoin’s bounce back from $55,000 was likely fueled by PayPal’s announcement that crypto will now be accepted as a medium of exchange at millions of global merchants.

The new feature, Checkout with Crypto, means U.S. customers will be able to “seamlessly” use their digital assets to make purchases. PayPal also supports Ether, Litecoin and Bitcoin Cash.

Crypto will be converted into fiat as soon as the transaction takes place, and the payments giant says this will create “certainty of value and no additional transaction fees.”

PayPal CEO Dan Schulman said: “Enabling cryptocurrencies to make purchases at businesses around the world is the next chapter in driving the ubiquity and mass acceptance of digital currencies.”

One fly in the ointment here concerns how America’s taxman, the Internal Revenue Service, regards crypto as property rather than currency. This means that even spending Bitcoin that has risen in value could be regarded as a taxable event.

The U.S. Securities and Exchange Commission has given its blessing for Coinbase to make its stock market debut, with the exchange confirming it will happen on April 14. It’ll feature on the Nasdaq Global Select Market under the ticker symbol COIN.

Coinbase had been expected to go public in March but reportedly delayed its plans after paying a $6.5-million fee as part of a settlement with the Commodity Futures Trading Commission.

Crypto analyst Filbfilb says the direct listing could spark “increased volatility” for Bitcoin’s price, especially if Coinbase suffers immediate sell-offs like Deliveroo did during its ill-fated IPO in London.

In other developments, Messari has compiled a report concluding that the so-called “Coinbase effect” — a popular belief that new token listings on the exchange tend to outperform launches on other exchanges — is true.

Dapper Labs has raised $305 million in a star-studded funding round — meaning it now reportedly holds a valuation of $2.6 billion.

The company, which has brought CryptoKitties and NBA Top Shot to life, says it wants to go beyond American basketball and extend the “same magic” to other sports franchises.

In other news, intrepid Cardano developers have found a way to mint bootleg nonfungible tokens — despite the fact that the blockchain doesn’t support smart contracts yet. Meanwhile, The Weeknd announced he’s releasing his first NFT via Nifty Gateway, featuring “new music and limited edition art.”

Nifty Gateway has also announced that it is planning to become carbon-negative in the near future by calculating its emissions and purchasing twice as many carbon offsets each month.

Announcement of the week

Markets Pro delivers up to 1,497% ROI as quant-style crypto analysis arrives for every investor

New figures this week showed that 41 of the 42 trading strategies tested by Markets Pro are currently beating Bitcoin’s investment returns, and 36 of them are winning against an evenly weighted basket of the top 100 altcoins.

Two key features are offered to subscribers. The first is the VORTECS™ Score, which is derived from an algorithm that examines multiple different variables (including sentiment, tweet volume, price volatility and trading volume) and compares those with historically similar marketscapes.

And the second is NewsQuakes™: alerts on events that have historically had a significant impact on an asset’s price over the following 24 hours.

Cointelegraph Markets Pro is available exclusively to subscribers on a monthly basis at $99 per month, or annually with two free months included.

“Expecting Ethereum to outperform Bitcoin for all of Q2.”

“Is Theta actually worth all the hype? I am not sure because it’s too early to tell. I want to see how well their mainnet does.”

“SpaceX is going to put a literal Dogecoin on the literal moon.”

“I do think Bitcoin is on an inevitable path to having the same market cap and then a higher market cap as gold.”

“We are working closely with teams across the firm to explore ways to offer thoughtful and appropriate access to the ecosystem for private wealth clients, and that is something we expect to offer in the near term.”

“This is the first time you can seamlessly use cryptocurrencies in the same way as a credit card or a debit card inside your PayPal wallet.”

“A part of the problem with Bitcoin is 90% of it is not done in the United States. 90% of it is done in countries that have dirty energy. So that’s the reason why it’s considered to be a dirty activity.”

After previously declaring that Bitcoin will be worth “infinity” in the future (Digests passim), Kraken CEO is making a triumphant return to Prediction of the Week.

Speaking to Bloomberg, Jesse Powell was keen to offer alternatives to measuring Bitcoin’s value in dollars — by comparing future price action to high-end sports cars… which can also have their value measured in dollars.

Powell said that one Bitcoin, which is currently worth a Tesla Model 3, could be worth one Lambo by the end of this year… and one Bugatti by 2023.

He added: “There could be 10 times as many U.S. dollars out there a year from now, so it’s really hard to measure Bitcoin against the dollar.”

A scam cryptocurrency app in Apple’s App Store has reportedly swindled 17.1 BTC from one unsuspecting user.

Phillipe Christodoulou had thought he had downloaded official Trezor software, given how it had many five-star reviews. Little did he know that the company doesn’t currently provide such an app.

After entering his seed phrase, Christodoulou says his funds were stolen. His crypto haul was worth $600,000 at the time, but now it’s worth $1 million.

The Washington Post reports that he has now filed a report with the FBI, but it seems the victim is reserving most of his anger for the tech giant: “They betrayed the trust that I had in them. Apple doesn’t deserve to get away with this.”

Trezor spokesperson Kristyna Mazankova told Cointelegraph that the firm has been fighting fraudulent apps for years — but claimed the wallet company “never gets any response from either Apple or Google.”

An investment portfolio that was championed by CNBC at the time has now resurfaced, which was made up of 30% Bitcoin and 70% altcoins.

StatsBTC, which crunched the numbers, noted: “The 30% #BTC allocation is responsible for 75% of the return.”

South Korean prosecutors have finally sold a Bitcoin haul they confiscated from a criminal in 2017, and it’s worth $10.5 million more than it was at the time of the arrest.

This is believed to be the first time that authorities in the country have sold confiscated Bitcoin — and at the time the crypto was seized, it was worth a paltry $238,000.

In late March, the South Korean government enacted widespread crypto-specific laws for the first time, putting more pressure on exchanges and virtual asset service providers to use real-name trading accounts and to report their activities to Korea’s Financial Intelligence Unit.

A new era of content monetization? Blockchain tech can get you paid

Current content monetization systems are seen as broken, but some blockchain solutions claim to hold the key to solving their issues.

Kerr says a major reason that decentralized finance has not yet hit the mainstream is that “93% of holders are never gonna touch their own keys.”

The rise of nonfungible tokens, or NFTs, has been nothing short of astounding this year. Google searches for “NFT” are up over 600% since mid-February.

How Aave’s integration with Polygon will optimize gains