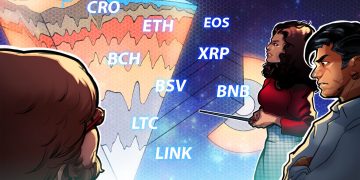 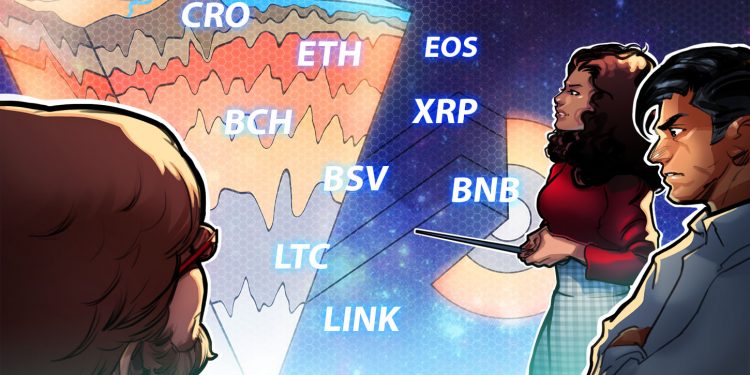 The Nasdaq has regularly been making new highs for the past few days, which has resulted in a strong rally in a few technology companies. Along with this, a few stocks in the S&P 500 are also on a tear, pushing their valuations to astronomical levels.

While the U.S. equity markets are on a strong footing, gold is not to be left behind. It has also risen to a nine-year high, which shows that assets that are perceived as risky and safe havens, both are rallying at the same time. Ultimately, this proves that an abundant money supply is finding its way into these asset classes.

However, there is a limit to how high both asset classes can go before they start to look overextended. With the money supply likely to remain high for a few more years, the attention of investors could shift towards cryptocurrencies and if even if a small portion of this excess liquidity flows into cryptocurrencies, their prices are likely to surge.

The Bollinger band is a good indicator to show how every consolidation (marked as ellipses on the chart) has been followed by a trending move. Bitcoin (BTC) consolidated for about four months from December 2018 to March 2019 near the lows.

This long period of consolidation resolved to the upside and started a strong trending move that continued till June 2019 before topping out at $13,973.50. After that, the top-ranked asset on CoinMarketCap has entered several periods of consolidation and almost every time, the breakout has resulted in a trending move.

The current period of consolidation is also likely to result in a strong move. If the consolidation resolves to the upside, the possibility of a break above the $10,000–$10,500 resistance is high.

Such a move could result in a breakout of the resistance line of the symmetrical triangle, which is another positive.

Even though the bulls have not been able to break above the $10,000–$10,500 resistance zone, the BTC to USD pair has been trading near the resistance levels, which suggests that the bulls are in no urgency to close their positions.

While the structure of the chart is positive, there are no guarantees in trading. Hence, traders should also be aware of other possibilities. If the resolution of the range happens to the downside, then, it will be a huge negative. The bears will be further emboldened if the support at $8,130.58 cracks.

The 20-day exponential moving average ($236) usually acts as a support in an uptrend as the bulls buy the dips to this level. Although Ether (ETH) is currently trading inside the $216.006–$253.556 range, the bulls are defending the 20-day EMA, which hints at a possible change in trend.

A breakout of $253.556 will indicate the resumption of the uptrend that has a target objective of $288.599. If the momentum can push the second-ranked cryptocurrency on CoinMarketCap above this level, a rally to $320 is possible.

The gradually upsloping moving averages and the relative strength index in the positive territory suggest that the bulls have a minor advantage.

This bullish view will be invalidated if the ETH/USD pair turns down from the current levels or the overhead resistance and slips below the moving averages.

XRP bounced off the 50-day simple moving average ($0.19), which is a positive sign as it shows that the sentiment has changed from sell on rallies to buy on dips. The 20-day EMA ($0.19) has turned up and the RSI has risen above the 60 level, which suggests that bulls are making a comeback.

However, if the bears defend the resistance at $0.214616, the fourth-ranked cryptocurrency on CoinMarketCap could remain range-bound for a few days. The XRP/USD pair will indicate weakness on a break below the moving averages.

Bitcoin Cash (BCH) has held the 20-day EMA ($234) for the past four days but the altcoin has failed to bounce strongly from this support, which indicates a lack of urgency among the bulls to buy at these levels.

The bears will now try to sink the fifth-ranked cryptocurrency on CoinMarketCap below the 20-day EMA. If that happens, a drop to the $217.55 levels is possible.

Both moving averages are flat and the RSI has been trading close to the midpoint, which suggests a balance between demand and supply.

The pullback to the breakout level of $0.11 was purchased aggressively by the bulls, which is a huge positive. Now, this level becomes the new floor for Cardano (ADA) and a break below it could threaten the uptrend.

If the bulls can push the price above $0.1380977, the uptrend is likely to resume. Above this level, the sixth-ranked cryptocurrency on CoinMarketCap can rally to $0.173 and then to $0.20.

The upsloping moving averages and the RSI in the overbought zone indicate that the bulls are in command. However, if the bears defend the $0.1380977 level, then the ADA/USD pair is likely to consolidate for a few days before attempting to resume its uptrend.

The pullback in Bitcoin SV (BSV) stalled at the 20-day EMA ($176) but the bounce off this level lacks strength, which indicates that the buyers are not confident that the rally will resume.

If the seventh-ranked cryptocurrency on CoinMarketCap fails to break above $200, it is likely to consolidate between $170–$200 for a few days. A break below $170 will signal weakness and could result in a drop to $146.20.

Conversely, if the bulls propel the price above $200, the BSV/USD pair can rally to $227. A break above this level is likely to result in a new uptrend.

After three months of consolidation, Binance Coin (BNB) has broken out of the overhead resistance at $18.20, which is a huge positive. If the price closes (UTC time) above $18.20, it will complete an ascending triangle pattern that has a target objective of $22.93.

The 20-day EMA ($16.79) is sloping up and the RSI has risen into the overbought zone for the first time since mid-Feb., which suggests that the trend might be changing in favor of the bulls.

This positive view will be invalidated if the eighth-ranked crypto-asset on CoinMarketCap turns down from the current levels and dips back below $18.20. If that happens, it will indicate a lack of demand at higher levels and point to a few more days of consolidation.

Litecoin (LTC) is facing stiff resistance at $45.3501, however, the positive thing is that the bulls have not allowed the price to dip below the 20-day EMA ($43.61) for the past few days, which indicates accumulation on dips.

If the bulls can push the price above $45.3501, the ninth-ranked cryptocurrency on CoinMarketCap can rally to $51, which is again likely to act as a stiff resistance. If the price turns down from this level, the range-bound action could continue for a few more days.

The LTC/USD pair has been an underperformer, which indicates a lack of buying interest. If the pair fails to sustain above $45.3501, it is likely to break below the 20-day EMA and remain stuck in the bottom half of the $39–$51 range.

Crypto.com Coin (CRO) is witnessing signs of profit booking at $0.146157, which could drag the price to the 20-day EMA ($0.132). This is an important support because the bears have not been able to sustain the price below it for the past many weeks.

The trend remains bullish, hence, the sentiment is to buy the dips. If the bulls purchase the dip to the 20-day EMA aggressively, the 10th-ranked cryptocurrency on CoinMarketCap is likely to resume the up move and rally to $0.15306.

However, the CRO/USD pair has covered a lot of distance from its March lows, hence, if the traders decide to take some money off the table, then a break below the 20-day EMA is possible. If this support cracks, the correction can extend to $0.11.

Chainlink (LINK) is in a strong uptrend, which has sent the altcoin skyrocketing into the top ten list of cryptocurrencies. However, due to the sharp up move of the past few days, the RSI has risen deep into overbought territory, which suggests that a consolidation or a minor correction is likely in the next few days.

The 11th-ranked cryptocurrency on CoinMarketCap is facing resistance at $8.48, which is just below the target objective of $8.5446 as suggested in the previous analysis.

On the downside, the bulls are likely to aggressively defend the 38.2% Fibonacci retracement level of $7.0023. If the LINK/USD pair turns around from this support, the uptrend is likely to resume.

If the bears sustain the price below $7.0023, then it could weaken the momentum and result in a few days of consolidation.

The views and opinions expressed here are solely those of the author and do not necessarily reflect the views of Cointelegraph. Every investment and trading move involves risk. You should conduct your own research when making a decision.