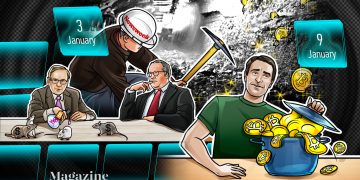 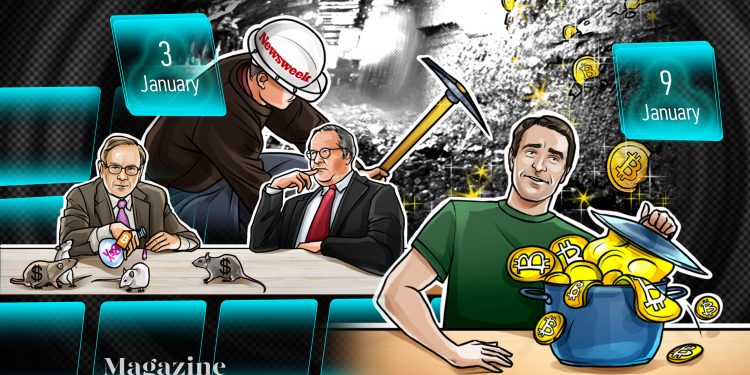 Brace for impact? After hitting $42,000, Bitcoin price volatility may rise

Another week, another spate of all-time highs. Bitcoin managed to crack $42,000 on Friday, surging by 9% in just three hours.

A sharp correction soon followed, with prices tumbling by 7% in the following eight hours. This may seem rather tame in percentage terms — but that’s a drop of almost $3,000.

Whales have been selling en masse since the start of 2021 and taking a profit on their positions. They’re currently locked in a battle with new buyers in the U.S. who are aggressively accumulating BTC. Key metrics to observe right now include Bitcoin outflows from Coinbase and stablecoin inflows into major exchanges.

Raoul Pal has warned that a “New Year Head Fake” could cause a nasty correction in the BTC and gold markets. It’s unclear whether this would be as brutal as the flash crash last March, but it’s worth noting BTC is overbought on weekly and monthly charts.

At the time of writing, BTC’s market cap has vaulted beyond Facebook, Tencent and Alibaba, and it has come close to overtaking Tesla. The jaw-dropping rally has helped the total market cap of all cryptocurrencies exceed $1 trillion for the very first time.

Bullish fervor surrounding Ether intensified this week, with the world’s second-largest cryptocurrency breaking above $1,200 for the first time in three years.

The gains were largely driven by a confluence of fundamental factors, including Bitcoin’s parabolic rally, the anticipation of ETH futures contracts and a surging DeFi sector.

Year-to-date, ETH has surged by a staggering 66.5%, continuing last year’s theme, where it handsomely outperformed BTC.

Google searches for “Ethereum” have now hit an all-time high, prompting some optimistic pundits to suggest that ETH could smash its previous record of $1,432.88 between Jan. 10 and 16.

So… what would be the key levels to watch if ETH is propelled into uncharted territory? Cointelegraph Markets analyst Michaël van de Poppe says the Fibonacci extension finds potential top structures at $1,800 and $2,700–$2,800. However, he cautioned investors and traders to expect a potential correction soon, as nothing goes up in a straight line.

One of the most head-scratching developments in the crypto markets this week saw XRP abruptly come back from the dead.

Having lost a substantial amount of its value due to legal issues at Ripple, a curious renaissance occurred for the embattled No. 4 cryptocurrency — with prices rising from $0.23 to $0.35 in a single day.

Michaël van de Poppe has said $0.35 represents the make-or-break level for bulls to hold in order to continue their gains, which come despite no real movement in legal proceedings.

In other news this week, crypto exchange Uphold said that it won’t delist XRP until the lawsuit filed by the U.S. Securities and Exchange Commission is resolved — and urged rival platforms to avoid “rushing to judgment ahead of the court’s decision.” Meanwhile, Revolut warned its users to “constantly reassess” their crypto holdings, including XRP.

Ripple CEO Brad Garlinghouse also broke his silence to answer five key questions about the SEC lawsuit. Slamming the “regulatory chaos” in the U.S., he revealed that the company has tried to reach a settlement with the SEC and said new attempts will be made once Joe Biden is in power. He also warned that the legal process can be slow.

Can Coinbase keep up with the crypto rally?

Coinbase has been under the microscope this week, not least because the U.S. crypto exchange is known for experiencing serious connectivity issues during periods of peak trading activity.

The disruption has occasionally prevented traders from taking advantage of price gains and dips — robbing them of profit-taking and reentry opportunities.

Coinbase is not the only major exchange to suffer issues during price rallies. Binance also routinely goes offline when BTC clocks up big gains. Commenting on the problem back in December 2020, Binance CEO Changpeng Zhao remarked that a 5% BTC surge is often accompanied by a 30x increase in trading volumes.

On Jan. 7, it was announced that Coinbase has acquired the Routefire platform for enhanced trade execution — a move that could go some way to restoring confidence.

MicroStrategy’s massive push into Bitcoin is paying off, with the firm securing a huge investment from Morgan Stanley. The bank has acquired 792,627 shares in the crypto-friendly company, representing a stake of 10.9%.

The purchase apparently happened on Dec. 31. MicroStrategy shares have had a colossal month — with shares moving from $289 on Dec. 8 to $531 by Jan. 8.

MicroStrategy has made Bitcoin its primary reserve asset and has made a concerted effort to raise funds so it can buy even more. As of Dec. 21, the company had stockpiled 70,470 BTC, with a staggering valuation of $2.9 billion.

Institutional investors like Morgan Stanley have warmed up to crypto assets considerably over the past year. Many have attributed Bitcoin’s recent bull market to renewed interest.

“The next correction is absolutely going to be painful for all the #FOMO buyers.”

“A lot of that [stimulus] will find its way into the markets. Certainly, when it comes into young people’s hands, they’re going right to their Robinhood accounts. One of the most unique things last time was seeing how many people bought Bitcoin with the exact amount of stimulus. Boom, boom.”

“While the narrative is institutional money, this phase, IMO, it’s really institutions have given Bitcoin validation, and now we have family offices serving the wealthy rushing in needing exposure. There’s a lot of requests for $1m+ buys happening.”

“FYI, Coinbase outflow on Jan 2 was an all-time high. It seems institutions bought $BTC when the price above 30k. $BTC bull market isn’t over.”

“A #bitcoin now buys you a Tesla. So, when will you accept it, @elonmusk?”

“Would be a shame to buy Model 3 now, when you can buy a Roadster for 1 BTC later this year.”

“I was wondering what to do for the rent, for a week now. And just remembered I had over 14000 Moons here in r/Cryptocurrency. Sold them and made my rent. It was like a stone lifted out of my chest. Not able to find the right word for this feeling.”

“A crowding out of gold as an ‘alternative’ currency implies big upside for Bitcoin over the long term.”

“It’s important that you constantly reassess your crypto holdings, specifically XRP, and whether you remain comfortable with the associated risks.”

“On the 1st business day of 2021, #Bitcoin takes its rightful place atop the Financial Times.”

“A vital part of the SEC’s remit is the protection of consumers. It is hard to see how a judgment rendering XRP essentially worthless and inflicting billions of dollars of losses on retail investors who purchased XRP in good faith would square with that remit.”

Joe Biden has said he is working on a multi-trillion-dollar package that will deliver $2,000 stimulus checks to U.S. citizens, helping them to weather the economic repercussions of COVID-19.

And according to Mike Novogratz, such measures could be further good news for the markets. He said: “When it comes into young people’s hands, they’re going right to their Robinhood accounts. One of the most unique things last time was seeing how many people bought Bitcoin with the exact amount of stimulus. Boom, boom.”

The Galaxy Digital CEO argued that there’s still plenty of “speculative excess” on Wall Street, pointing to Tesla’s dramatic surge as an example.

However, Novogratz says that the disconnect between the markets and the economy is likely to spell trouble at some point. In his interview with CNBC, he added: “You’ve got to watch for the cracks. One day we’ll wake up, and markets will be reversing, and then they’ll reverse hard. I just don’t know when that is.”

A YouTube page belonging to U.S. rapper Hiiikey was hacked this week and taken over by fraudsters promoting a fake Bitcoin and Ether giveaway.

Hiiikey, whose real name is Keyshawn Butler, has 249,000 subscribers on the video-sharing site. His page was rebranded as “[Ethereum FUND]” and a livestream featuring an old video of Ethereum co-founder Vitalik Buterin was launched.

Worryingly, the fraudulent livestream was active for several hours before being taken down.

A crypto enthusiast has issued a warning to “overconfident” hodlers after losing the password to their wallet by not acting cautiously enough.

Reddit user Onnar said they had lost access to 2.6 BTC while attempting to transfer a wallet to a new computer purchased over the holidays. The user claimed they formatted the drive of their old system without double-checking whether the password manager still contained the password needed to access the private keys.

Onnar wrote: “I’ve spent the past week and a half going through all my remaining disk files and notes, the password is nowhere to be found.”

Many Reddit users were sympathetic to Onnar’s plight, and some stepped up with advice to avoid similar accidents in the future.

“The standard now is to use a hardware wallet and write down the seed on paper plus on a metal plate. The standard is not to encrypt your seed words in a computer file for very good reasons,” one wrote.

The order bars United States citizens or people located in the U.S. from using nine apps — including Alipay and WeChat Pay.

The executive order takes effect in 45 days, by which time Trump will already have been out of office. Given that his earlier order to get ByteDance to divest from TikTok was stonewalled in court while he was still in office, there’s not a ton of reason to believe that Trump will get his way here.

Biden’s transition team had not responded to Cointelegraph’s request for comment as to whether the new administration plans to see Trump’s order through.

Many in crypto, as well as the broader tech industry, have warned of a cold war in technology between China and the U.S., including Facebook’s Mark Zuckerberg and several leaders of Ripple Labs.

Bitcoin turning 12: From the genesis block to Wall Street adoption

The Bitcoin network as we know it today officially kicked off 12 years ago this week, when Satoshi Nakamoto released the first software client.

The rise of crypto: Bitcoin sets landmarks, but alts can go independent

Unfounded hype? This time around, investors have begun to realize the value proposition of Bitcoin and Ether.

Bullish crypto events of 2020 that will drive historic adoption

These are 2020’s most important events in crypto that will have a lasting effect on the adoption of blockchain and digital currencies.