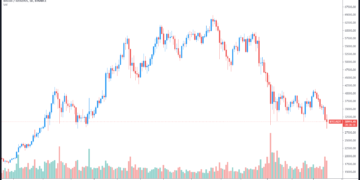 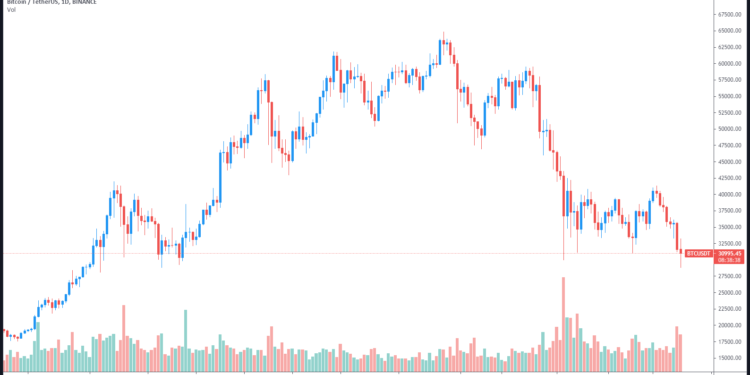 Cryptocurrency investors awoke to another round of price declines on June 22 after the price of Bitcoin (BTC) dropped to a 6-month low at $28,805. The dip below the crucial $30,000 level might appear to be a prime buying opportunity but data shows that institutional investors are continuing their longest selling streak since February 2018.

Data from Cointelegraph Markets Pro and TradingView shows the June 21 dip below $32,000 and recovery above $33,000 was just a precursor to Tuesday’s move which saw BTC hammered at the start of the trading day, reaching a low of $28,805 before bouncing back to $32,000 at the time of writing.

Ether (ETH)  also took a hit, dropping by 15% to a low of $1,700 after bulls failed to hold the $1,900 level. Unless a significant source of momentum emerges to help the market stage a turnaround, the current trend continues to be negative as evidenced by bears dominating Bitcoin’s $2.5 billion options expiry on June 25.

Warning signs provided by the data

While the price action on June 21 may have come as a surprise to many, numerous indicators hinted at the decreasing momentum and possibility of the price dropping further.

According to data from Glassnode, the number of active addresses on both Bitcoin and Ethereum have declined significantly from their highs in May, with active BTC addresses falling by 24% while active Ethereum addresses fell by 30%.

Declines in activity and value transacted on the networks can be interpreted as a drop in enthusiasm in general as investors who bought at the highs in April and May must now decide if they want to sell at a loss to avoid further the potential for further downside or hold with the hope that the market will eventually turn around.

Another major source of the market downturn which has been building for weeks is China’s crackdown on cryptocurrency mining operations in the country. This has led to a substantial drop in the record hashrate to levels last seen in September 2020.

While the closing of a large number of Chinese mining farms and the resulting decline in hashrate is a negative development in the short term, Delphi Digital has taken the stance that “in the mid to long term, this should be viewed as healthy for the Bitcoin network as hash rate concentration risk is significantly reduced.”

According to Delphi Digital, the hash rate concentration in Chinese-based mining pools has been declining since China began its crackdown on mining, allowing smaller pools to grow “their share from 30.81% to 37.96% over the last 30 days.”

In addition to the clampdown on mining, China has also reiterated that banks should not be supporting crypto-focused over-the-counter businesses, which led to “panic among Chinese miners and investors,” leading to a significant decline in the supply of BTC held in miner addresses.

With China unlikely to change its current course of action regarding cryptocurrencies anytime soon, investor uncertainty and choppy price action are likely to continue in the short term.