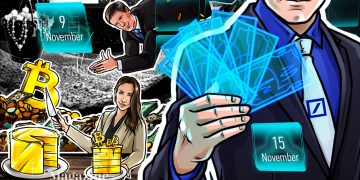 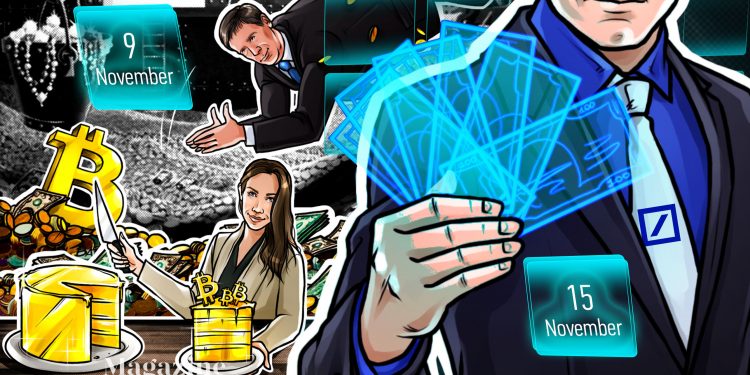 Coming every Sunday, Hodler’s Digest will help you track every single important news story that happened this week. The best (and worst) quotes, adoption and regulation highlights, leading coins, predictions and much more — a week on Cointelegraph in one link.

Bitcoin price at $16,000 and beyond? Here are the bear and bull cases

We’re undoubtedly in a bull market right now. This week, Bitcoin hit $16,000 for the first time in years.

Even this weekend’s volatility hasn’t been enough to derail BTC’s momentum. Although prices abruptly dropped to $15,670 overnight on Sunday, traders quickly stepped in to defend $16,000.

It is exceptionally rare for Bitcoin to perform this well. The world’s biggest cryptocurrency has only closed above $16,320 on 12 days in its history — just 0.28% of the time.

Naturally, the question now is whether BTC’s strength will remain, given how it’s in touching distance of surpassing the current all-time high of $20,089.

Analysts at IntoTheBlock say there is little resistance between $16,300 and $18,750, indicating that further upside is possible.

However, with “extreme greed” flashing on the Fear & Greed Index, Cointelegraph contributor Michaël van de Poppe has warned a correction is almost inevitable in the short term.

PlanB, the creator of the stock-to-flow model, has doubled down on his assertion that BTC’s best days lie ahead, saying he has “no doubt whatsoever” that Bitcoin prices will have reached $100,000–$288,000 by December 2021.

His model has caused controversy over the years, and now, one hedge fund executive is inviting S2F enthusiasts to put their money where their mouth is.

Eric Wall, the chief investment officer at Arcane Assets, is offering a $1-million bet that Bitcoin won’t have come within 50% of PlanB’s target range by 2025, let alone by next December.

“This is not a joke. I’m willing to lock up the money for it with a 3rd party we both trust, and you must too,” he wrote.

October was a grim month for many decentralized finance tokens. Faced with heavy losses, some were hastily proclaiming that the DeFi bubble had well and truly burst.

But wait a minute. Data from Dune Analytics shows there has been sustained, sector-wide growth in activity — with user numbers growing 55% since the start of October.

Lending protocol Compound and decentralized exchange dYdX were among DeFi’s strongest gainers, increasing their user bases over the past 30 days by 250% and 50%, respectively.

Also this week, research from IntoTheBlock suggested that institutional money is flowing into DeFi — with Yearn.finance’s YFI among the top beneficiaries. On-chain transactions of $100,000 or higher have increased by 282% over the past week, including almost $134 million worth of activity on Tuesday alone.

The wait is over. PayPal now allows all eligible customers in the United States to buy, sell and hold Bitcoin, Ether, Bitcoin Cash and Litecoin.

Crypto purchases are limited at $20,000 a week — double the originally announced $10,000 — and customers are set to be informed of the new services within the coming days. No fees are being charged on crypto transactions until the end of the year.

These features are also set to be unveiled globally at the beginning of 2021, and the e-commerce platform’s 26 million merchants will soon be able to accept crypto as a payment method, too.

It’ll be interesting to see whether the rollout will encourage greater levels of crypto adoption among the masses, especially in light of BTC’s recent surge. Google Trends data suggests there has been little retail interest in Bitcoin’s boom of late, indicating that institutional investors have been driving the cryptocurrency up.

European Central Bank president Christine Lagarde has said that the bank should reach a decision on whether to release a digital euro early next year.

However, she stressed that the ECB is not “racing to be first” in the quest to launch a central bank digital currency.

Hinting that the institution is leaning toward pushing ahead with a central bank digital currency, she added: “My hunch — but this is a decision that will be taken collectively — is that we might well go in that direction.”

And Lagarde also revealed that it will probably take “two, three, four years” for a digital euro to see the light of day.

This week, a Deutsche Bank report warned that this non-urgent approach to CBDCs might not be good enough.

Germany’s largest banking institution said it is confident that CBDCs will replace cash in the future and said the U.S. and Europe could suffer consequences unless it starts catching up now.

“They may find that their companies are forced to adopt the digital currencies and policies of other countries as payment mediums,” Deutsche Bank wrote.

“XRP would have been declared as a security if the SEC understood cryptos. This is a classic case of a market being manipulated by a bag-holder.”

“This is the death knell of Bitcoin. It was fun whilst it lasted. $3k here we come.”

“Many levels beneath the current price are untested on the weekly timeframe. A healthy way to build up a new cycle is the backtesting of previous resistance levels as new areas of support.”

“[In January 2021] we will make the decision as to whether or not we go forward with the digital euro. My hunch — but this is a decision that will be taken collectively — is that we might well go in that direction.”

“#Apple could generate $100 billion or more in shareholder value if they integrated #Bitcoin into Apple Pay, built a secure crypto wallet into the iPhone, and began buying #BTC with their Treasury Reserves.”

“I bet $1,000,000 that the S2FX model will be broken less than five years from now. This is not a joke. I’m willing to lock up the money for it with a third party we both trust, and you must too. I define ‘broken’ = it won’t have reached even 50% of its target range.”

“If you have failed to report holding Bitcoin or other virtual currencies on your past returns or filed an incomplete or misleading picture of your cryptocurrency holdings, the time to act to correct this is now.”

“People ask if I still believe in my model. To be clear: I have no doubt whatsoever that #bitcoin S2FX is correct and #bitcoin will tap $100K-288K before Dec2021.”

The strategic investor said that the environment generated by the coronavirus pandemic favors Bitcoin.

Central banks have been forced to embark on money-printing sprees to shield their economies of late, while interest rates have been at historic lows.

All of this makes scarce assets that retain their value in an inflationary environment, such as gold and Bitcoin, far more appealing.

Over the coming years, she’s predicting there will be a significant capital spillover from traditional assets into the world’s leading cryptocurrency.

If you’re a Coinbase user in the U.S., listen up.

A boutique Californian tax firm has warned that the IRS is stepping up its efforts against those who fail to comply with tax and reporting requirements.

Klasing Associates said: “If you have failed to report holding Bitcoin or other virtual currencies on your past returns or filed an incomplete or misleading picture of your cryptocurrency holdings, the time to act to correct this is now.”

The accountants added that it will be too late to make amends once an audit or a criminal tax investigation has begun.

The firm’s warning came off the back of Coinbase’s first-ever transparency report, which was released back in October. It said that the hundreds of information requests filed by U.S. bodies such as the IRS should serve as a “major wake-up call” to crypto owners.

“This data makes it clear that the IRS is requesting information from Coinbase for the express purpose of checking it against its own taxpayer data and looking for discrepancies where holdings on Coinbase have not been reported on taxpayers’ returns,” the firm added.

Ethereum is about to launch a brand-new blockchain that will substantially increase the number of transactions per second it can handle. But according to Sam Bankman-Fried, even this upgrade won’t be futureproof.

The FTX exchange co-founder has claimed Ethereum 2.0 won’t be able to handle decentralized finance’s continued growth, which has already seen transaction fees go through the roof.

He told the Defiant podcast that Ethereum was holding DeFi back, and the only solution was to start building on other networks.

Bankman-Fried claims to have tested more than 30 blockchains, including Ethereum, before deciding to build his DeFi project Serum on the Solana blockchain due to its speed and infrastructure.

Crypto crimes declined in 2020 but DeFi hacks are on the rise, report warns

Cryptocurrency-related crimes have slowed down in 2020… but the decentralized finance sector has become a new hotbed for hacks and thefts, according to CipherTrace.

The blockchain analytics firm said total losses from crypto thefts, hacks and fraud dropped from $4.4 billion in 2019 to $1.8 billion over the first 10 months of 2020.

Although these statistics seem really encouraging on the face of it, they don’t tell the whole story. DeFi hacks were “virtually negligible” in 2019, but now account for 20% of all losses.

“Companies and individuals have rushed DeFi products to market that have not gone through security verification and validation. […] So people are figuring out that there’s a weakness here,” CipherTrace CEO Dave Jevans said.

As Bitcoin price rises, institutions get down with digital assets

Institutional interest in Bitcoin continues to rise as bullish sentiment around BTC prevails.

Even though wallet operators have a large role to play in protecting funds, customers also need to educate themselves to avoid phishing scams.

The way OKEx has handled its nearly month-long withdrawal ban has left many of the company’s loyal customers confused and angry.