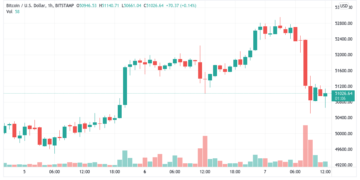 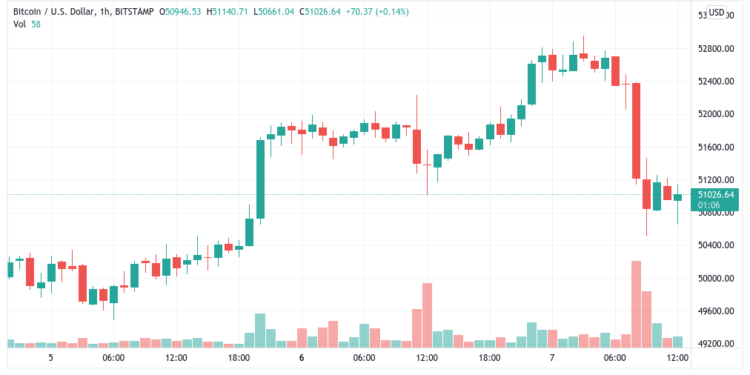 BTC/USD was bouncing around the $51,000 mark on Tuesday, according to data from Cointelegraph Markets Pro and TradingView, following a $2,000 loss in two hours earlier in the day on Monday.

After reaching new highs of about $53,000 overnight, the pair has gained bullish momentum as a result of El Salvador becoming the first sovereign state to legally recognize Bitcoin as a currency.

“If that is holding, we’re going to look at $58,000 next,” Michael van de Poppe said in his latest YouTube update.

He said that there was no need for alarm at prices above $50,000, regardless of Tuesday’s volatility, which he felt represented a “very healthy” rise after the breakthrough.

According to fellow trader and analyst Rekt Capital, a “retest” is currently underway, with a “key” level to maintain at roughly $50,300 being highlighted.
Pentoshi has also requested a $50,000 retention fee.

Today we want to hold 50.5k on a closing basis and flip this resistance to support $BTC

Meanwhile, altcoins are continuing to lick their wounds after outperforming Bitcoin in terms of reversing recently achieved levels of value.

Solana (SOL) was the only cryptocurrency to post a positive performance on the day, in stark contrast to the other tokens in the top ten cryptocurrencies by market capitalization.

If the current price of Ether (ETH) falls below $3,700, van de Poppe believes the cryptocurrency could be in line for a retest of $3,400.
It might also retest the recently regained 0.071 level in relation to bitcoin (BTC).

With its price having fallen to $2.58, Cardano (ADA) is still down 6.7 percent on the day and 15 percent from its recent all-time highs, according to CoinMarketCap data.