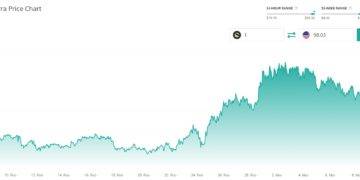 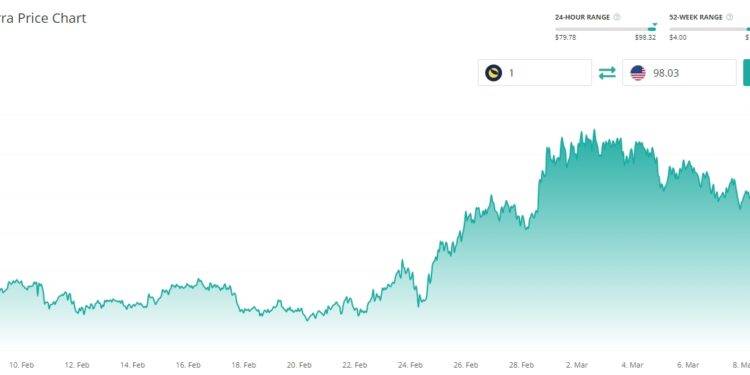 The most important lessons are that Bitcoin has topped $42,000 and has inspired broader positive activity across cryptocurrency markets.

The unexpected surge in the value of digital assets may have been triggered by a comment made by the US Treasury Secretary on the planned tax reform. The Executive Order on Cryptocurrencies signed by Vice President Biden
Terra was one of the most significant beneficiaries of today’s rise; the ecosystem’s leading LUNA rose by more than 20% and is now within striking reach of its all-time high (ATH).
As a result of the publishing of a statement on digital assets by the United States Treasury, cryptocurrency markets have risen sharply.

The bulls had the better hand today, as the total cryptocurrency market capitalization climbed by about 6 percent in the early hours of Wednesday, reaching $1.89 trillion. On the heels of more than 8 percent 24-hour gains, Bitcoin breached the $42,000 barrier, while Ethereum and other major altcoins followed in the footsteps of the world’s oldest and largest cryptocurrency, posting gains in the high single digits. At the time of publication, 93 of the top 100 digital currencies were trading in the positive territory.

On Tuesday, US Treasury Secretary Janet Yellen issued a statement regarding the Biden administration’s planned executive order on the cryptocurrency industry. Read the message here. The message was published a day early and withdrawn from the site as soon as it was discovered, but not quickly enough to avoid being captured in a digital archive.

It’s difficult to say how much of an impact the announcement had on today’s market rise, but it was significant. However, if President Biden’s recent statement is any indication, his imminent executive order is unlikely to entail significant changes in crypto law. The following is an extract from Yellen’s statement:

A report on the future of money and payment systems will be produced in collaboration with interagency partners by the Treasury Department. As part of this process, we will convene the Financial Stability Oversight Council, which will analyze the possible financial stability risks associated with digital assets and determine if suitable safeguards are in place.”

Terra’s LUNA rises 20 percent in value and is aiming for a $100 price tag.

When talking about today’s rise, it’s impossible not to mention LUNA’s outstanding performance on the stock market thus far. Over the course of the last 30 days, the price of LUNA has climbed by more than 75%, placing it among the top performing digital assets during that time frame. After posting double-digit gains today, LUNA set a new cycle high of $98.5, which is less than 5 percent behind the stock’s previous all-time high of $102.8, which was reached at the tail end of 2021.

More than 75% increase in the price of LUNA has occurred in the course of a little more than two weeks.

The LUNA price increase corresponds to the rapid expansion of the Terra ecosystem, both in terms of its native stablecoins such as TerraUSD and TerraKRW and the larger DeFi application space. More than $25 billion worth of digital assets is locked away in decentralized protocols operating on the Terra blockchain, according to blockchain analytics firm DeFi Llama. This is an increase of 74 percent from the previous month’s total. To put this in perspective, Ethereum is the top-ranked cryptocurrency with a TVL of $114 billion, while the third-ranked BNB Chain has a TVL of approximately $12 billion.

It will be interesting to see whether LUNA is able to build on the momentum that has been generated over the past two weeks and whether it is able to re-enter the $100 range in the coming days.

David is a cryptocurrency enthusiast who also happens to be a specialist in personal finance. He has produced a large number of publications for a variety of platforms. It was because he enjoys discovering new things that led to him discovering blockchain in the first place.