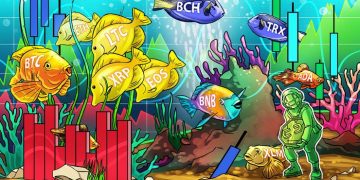 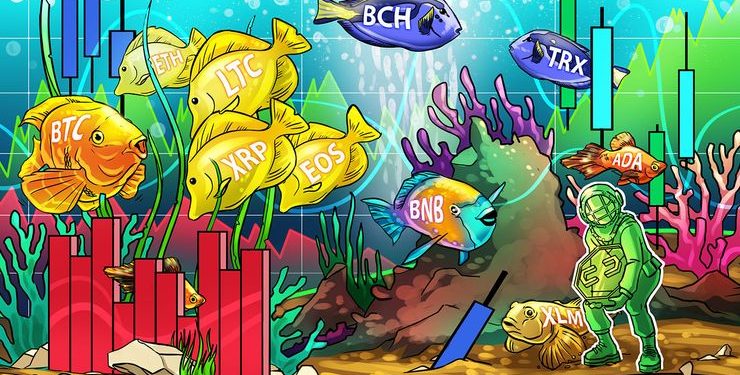 The crypto markets are eagerly awaiting the launch of institutional trading platform Bakkt. Its launch is expected to attract large investors whose involvement is needed to propel markets to the next level. Without even starting operations, investors are already valuing it at $740 million. This is likely to increase further if it can generate large volumes. However, some investors doubt whether it can live up to its expectations and earn enough to justify its valuations.

The volumes of the crypto exchanges have been under the scanner as The Tie published a report recently, which suggested that most reported volumes are fake. This puts the total volume of LBank and Bit-Z — which have overtaken the leading exchange Binance — in question.

As the market matures, fake reporting is likely to be severely dealt with, as seen in the case of South Korean cryptocurrency exchange Komid, where two of its leaders were handed a jail sentence.

If the crypto markets bottom out, volumes will pick up. Let’s consult the charts and see if we find a new uptrend in any of the major cryptocurrencies.

Bitcoin (BTC) has been crawling higher for the past few days, but it is yet to make a dash towards the overhead resistance of $4,255. On the downside, it is taking support at the 20-day EMA and below it at the uptrend line. Both the moving averages are trending higher and the RSI in positive territory, which indicates that the bulls have the upper hand.

If the BTC/USD pair does not scale $4,255 within the next few days, traders are likely to book profits that will drag prices lower. Aggressive bears might also initiate short positions if the pair fails to rise above the overhead resistance.

A breakdown of the 20-day EMA will be the first signal that the bulls are losing their grip. The bears will be back in the driver’s seat if the price sustains below the 50-day SMA. Critical levels to watch on the downside are $3,355 and below it $3,236.09. If the bears sink the digital currency below $3,236.09, it will hurt sentiment and result in panic selling, dragging prices lower.

The cryptocurrency will pick up momentum above $4,255 because it will complete a double bottom pattern that has a target objective of $5,273.91. Traders can trail the stops on the long positions higher to $3,550, in order to reduce the risk.

However, a breakdown of the 50-day SMA will invalidate the small ascending triangle and can result in a fall to the trendline of the larger ascending triangle. On a break below this, the bullish pattern will be negated and the ETH/USD pair can fall to $102.49.

The 20-day EMA has flattened out and the RSI is close to the midpoint, which suggests consolidation in the near term. Traders can keep a stop loss of $125 on the remaining long positions.

There is hardly any volatility in Ripple (XRP). It continues to trade close to the moving averages. The attempt to breakdown of the uptrend line of the ascending triangle found buyers at lower levels on March 21. The price is again back above the trend line.

If the support breaks, the XRP/USD pair can dip to $0.27795. We expect a strong support at this level, but if this also breaks, the next support to watch out on the downside is $0.24508. The flat moving averages and the RSI close to 50 suggests consolidation for a few more days.

On the other hand, if the pair bounces off the current levels, it can move up to $0.33108, above which a rally to the resistance line of the channel is probable. A move above the channel will signal a trend change and can carry the price to $0.40. Traders can keep the stops on the long positions below $0.27795.

Litecoin (LTC) is currently stuck between $56.910 and the resistance line. The bulls have held the support but have failed to push the price above the overhead resistance. Both the moving averages are sloping up and the RSI is still in the positive zone. This suggests that the path of least resistance is to the upside. However, the failure of the RSI to break out of the negative divergence is concerning.

EOS has again failed to break out of the overhead resistance at $3.8723. This is a negative sign. The bears are now likely to attempt to sink the digital currency to the 50-day SMA.

If the pair bounces off the current levels or the 50-day SMA and breaks out of $3.8723, it can move up to $4.4930. However, the 20-day EMA has flattened out and the RSI has also dipped to the midpoint. This suggests a range formation in the near term.

Bitcoin Cash (BCH) has turned down from the overhead resistance of $163.89. The positive thing is that it did not break down of the 20-day EMA.

Both the moving averages are gradually sloping up and the RSI is in positive territory. This suggests that the bulls are in command. If the BCH/USD pair rebounds sharply from the current levels or from the 20-day EMA and breaks out of $163.89, it can rally to $175 and above it to $220.

However, if the pair plunges below the 20-day EMA, it can slide to the 50-day SMA. Therefore, traders can trail the stop loss on the long positions at $140.

Profit booking in Binance Coin (BNB) pushed its price below the uptrend line, but the bulls are currently attempting to defend the 20-day EMA and push the price back above the uptrend line.

On the other hand, if the pair bounces from the current levels and rallies above $16.6442826, it can resume its uptrend and rally to $18. For now, traders can hold the remaining long positions with stops at $14.

Stellar (XLM) has corrected to the 20-day EMA where it is finding some support. Both the moving averages are flattening out, which points to a consolidation in the near term.

Conversely, if the pair bounces off the 20-day EMA, it can move up to the resistance line. A breakout of this level can push the price to $0.14861760. The traders can keep the stops on the long positions at $0.08.

Tron (TRX) turned down from the 20-day EMA on March 22. Both the moving averages are sloping down and the RSI is also in the negative zone. This shows that the bears are at an advantage.

The bears will try to sink the TRX/USD pair to $0.01830 if the support at $0.02094452 cracks. On the other hand, the bulls will try to reverse direction from the current levels and scale above the moving averages. If successful, it can reach the top of the range at $0.02815521. If the pair sustains above the range or bounces off strongly from $0.01830, we might suggest long positions. Until then, we remain neutral.

After consolidating for almost three months, Cardano (ADA) has scaled above our recommended buy level of $0.05650. We like the way the digital currency has risen after forming a large basing pattern. It should now rally to its first target objective of $0.066121, followed by a move to $0.080.

Both the moving averages have started to trend up and the RSI has reached overbought levels. This shows that the bulls have the upper hand. On any dip, the ADA/USD pair should find support at $0.051468 and below that at the 20-day EMA. If both these supports break, the pair will lose momentum and might become range-bound once again. Therefore, traders can trail their stops higher to $0.048.