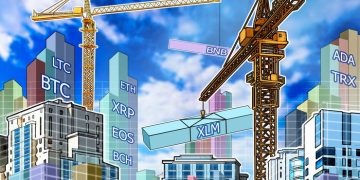 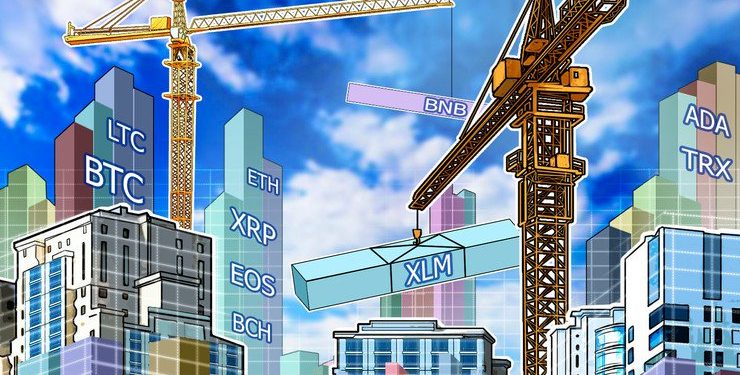 Many times, the signals provided by the indicators turn out to be false. More so at the bottom or the top because sentiment takes a long time to change. For the traders to become bullish after a prolonged bear phase is difficult. On numerous occasions, the first rally from the lows can reach overbought levels but this is not similar to the overbought levels as seen following an extended uptrend. Therefore, it is not a foregone conclusion that a similar outcome will follow.

While a minor correction or a consolidation is possible, a retest of the yearly lows looks unlikely. More so, after a number of altcoins have risen way above their lows and look to have started a new uptrend. But, as there is a large overhang of supply at every higher level, the rise will be gradual, with intermittent dips.

Bitcoin (BTC) momentarily ascended above $5,300 but failed to sustain. However, it has been gradually moving up for the past four days even though the RSI is deeply overbought. This is a bullish sign. If the price does not correct within the next few days, the traders waiting to buy the dip will be forced to go long at higher levels or miss out on the opportunity. Hence, a rally to $5,900 looks plausible. The uptrending moving averages show that the bulls are firmly in command.

On the other hand, if the BTC/USD pair dips from the current levels, it might find support closer to $4,800 and below it at the 20-day EMA. If both these supports break, a fall to $4,255 is possible. This is a critical support and if it breaks, it will be a negative development and will indicate that the current move was only a rally in the bear market. However, looking at the charts, we give this a low probability of occurring.

As the RSI is deeply overbought, we anticipate a minor correction or a consolidation for a few days, after which the uptrend should continue. Traders can keep the stop loss on the remaining long positions at $4,400.

Ethereum (ETH) broke out and closed (UTC time frame) above the overhead resistance at $167.32 on April 7. Thus, it completed an ascending triangle pattern that has a target objective of $251.64. However, there is stiff resistance at $220. Depending on the performance near the resistance, we might either suggest booking out of the complete position or trailing the stops very closely.

Our bullish view will be invalidated if the ETH/USD pair fails to hold the retest of the breakout levels of $167.32. In such a case, a drop to the 20-day EMA is probable, below which the fall can extend to the 50-day SMA. For now, the traders can retain the stop loss on the remaining long position at $150. We will trail the stops in a couple of days.

Ripple (XRP) has been trading in a tight range for the past two days. We like the way it has held up above $0.33108, however, the failure to push prices higher shows a lack of demand at higher levels.

Contrary to our expectation, if the price scales above $0.37835, it is likely to pick up momentum and quickly move up to $0.45. We do not find any attractive risk to reward trade setups, hence, we are not recommending a trade in it yet.

Litecoin (LTC) again broke out of the overhead resistance at $91 on April 6 and 7 but could not sustain. Currently, the price is back below $91. The bears will now try to drag the digital currency towards the 20-day EMA, which is a strong support.

If the LTC/USD pair bounces off the 20-day EMA or reverses direction from the current levels, it will try to break out and sustain above $100. If successful, it can result in a rally to $159 and above it to $180. As both the moving averages are sloping up and the RSI remains in the overbought zone, the path of least resistance is to the upside.

Our bullish view will be invalidated if the bears sink the pair below both the moving averages. In such a case, a large range bound action cannot be ruled out. We shall wait for the digital currency to bounce off a strong support before proposing a long position once again.

Attempts to scale above $320 have failed to find buyers at higher levels. Bitcoin Cash (BCH) is currently facing profit booking that can drag it towards $265. If this support breaks, a fall to $239 is probable. Both the moving averages are trending up and the RSI is in the overbought zone, which shows that the bulls are in command.

If the $265 level holds, the BCH/USD pair will again try to move up toward the recent high of $363.30. Above this a rally to $400 and higher is probable. The pair has a history of vertical rallies, hence, traders can keep the stops on the remaining long positions at $230. We shall watch for a couple of days and raise the stops further. The trend will turn in favor of the bears on a breakdown and close (UTC time frame) below $239.

EOS is finding it difficult to sustain above $5.50. It is likely to witness profit booking that can drag it down to the 20-day EMA. However, the uptrend is intact as both moving averages are sloping up and the RSI is in the overbought zone. If the digital currency rebounds from $5 or the 20-day EMA, it will again try to move up to its target objective of $6.8299.

The EOS/USD pair has a strong support at $4.4930. If this support breaks down, the trend will turn negative. If the support holds, the pair might remain range-bound between $4.4930 to $6.8299 for a few more days. The traders can keep the stop loss on the remaining long positions at $4.80.

Binance Coin (BNB) is not finding buying support above $20. Profit booking has dragged the price closer to the critical horizontal support. The 20-day EMA is also placed just below this support. Hence, we expect the bulls to defend it with strength. But if the 20-day EMA breaks down, a drop to the 50-day SMA is probable. Traders can retain the stop loss on the remaining long positions at just below 20-day EMA.

Conversely, if the BNB/USD pair rebounds from current levels, it will again attempt to scale above the $20–$22 resistance zone. If successful, a retest of the lifetime highs is probable. As both the moving averages are still sloping up and the RSI is in positive territory, the trend remains up. The pair will turn negative on a breakdown below $14.

The first level to watch on the upside is $0.14861760. The long-term downtrend line is also located close to this level; hence, this is likely to act as a major roadblock. If the XLM/USD pair sustains above the downtrend line, it will indicate a probable change in trend.

Our bullish assumption will be negated if the pair slides below the 20-day EMA. This might be followed by a drop to the 50-day SMA. The traders can trail the stop loss on the remaining long position to $0.1130.

Cardano (ADA) is struggling to break out of $0.094256. The failure to scale the overhead resistance is likely to attract profit booking. The first support on the downside is at $0.082952 and below it at the 20-day EMA. We expect one of these support levels to hold up.

Both the moving averages are rising and the RSI is in the overbought zone. This shows that the trend is bullish. A breakdown of the 20-day EMA will be the first indication that the uptrend is weakening.

Tron (TRX) broke out and closed (UTC time frame) above the overhead resistance of $0.02815521 on April 7. This triggered our buy recommendation given in the previous analysis. Traders can keep the stop loss at $0.024.

Both the moving averages have again turned up, which shows that the bulls are back in command. If the TRX/USD pair sustains the breakout, a rally to $0.040 and above it to $0.0480 is probable.

Our bullish view will be invalidated if the pair slides back below $0.02815521. This will suggest that the current breakout did not find buyers and was a bull trap.