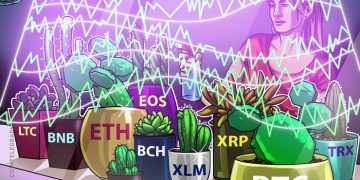 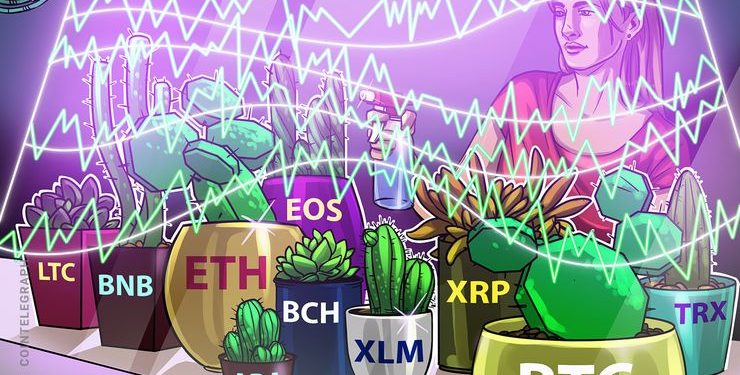 Bitcoin has closed in the green for the second consecutive month. This is the first such instance since December 2017, which indicates buying at lower levels. However, right now the action is in altcoins. Traders are piling on select altcoins and the positive sentiment is rubbing on to the leading digital currency. In the current recovery, Bitcoin’s dominance has been steadily decreasing, which is now at 50.1 percent.

Trading interest and volume in Bitcoin might pick up after the launch of Bakkt. Though there is no word on the launch date yet, Bakkt continues to build a strong team. It has announced Tom Noonan, former cybersecurity expert at IBM, Cisco and Endgame, as the chairman of its board of directors.

During the bull phase, ICOs offer astronomical returns. But during a bear market, most of them take a huge beating. As a result, interest in ICOs diminishes. In Q1 of this year, the ICO market could only raise $118 million, a far cry from the record $6.9 billion raised during Q1 of 2018. But as sentiment improves, this market could again come alive and projects with strong use cases should be able to raise money.

Bitcoin (BTC) is inching towards the overhead resistance of $4,255. The bulls have failed to break out of this resistance twice earlier, hence, we expect the bears to defend this level with full force.

However, if the bulls scale above this level, it will complete a double bottom pattern and will also trigger a number of stops on the short positions. This will result in a quick move to $4,914.11, followed by a move to $5,273.91. The upsloping moving averages and RSI close to the overbought zone shows that the bulls are in command.

Our view will prove to be wrong if the BTC/USD pair reverses direction from the current levels and drops below the moving averages. If the pair sustains below the 50-day SMA, a few more days of range-bound action can be expected. Traders can trail the stops on the long positions to $3,700.

Though Ethereum (ETH) closed above $144.78 on March 29, the bulls could not sustain the higher levels. However, the bullish sign is that the digital currency is trying to rebound from the 20-day EMA. If it can break out of $144.78 this time, a quick move to $167.32 is possible.

The ETH/USD pair will complete an ascending triangle pattern if it breaks out and closes (UTC time frame) above $167.32. The pattern target of this bullish set up is $251.64. Both the moving averages are sloping up gradually and the RSI is also in the positive territory. This suggests that the bulls have the upper hand. Therefore, traders can retain the stop loss on the remaining long positions at $125.

The traders are not showing any interest either in buying or selling Ripple (XRP). Therefor, the price has been idling around the current level for the past few days.

A breakout of the overhead resistance at $0.33108 and the resistance line of the descending channel will be the first indication that the bulls are back in action. Following a breakout of the descending channel, the XRP/USD pair is likely to start a new uptrend that can carry it to $0.60. The ascend might face minor hurdles between $0.40 and $0.45 and above it at $0.50 to $0.55. However, we expect all these hurdles to be crossed. We might suggest long positions once again if the price sustains above $0.33108.

Conversely, if the pair turns down and plummets below $0.27795, it will indicate weakness. The next support on the downside is the yearly low of $0.24508. The downtrend will resume if this support also cracks.

EOS is again facing stiff resistance at $4.4930, but it has not given up much ground like the previous instance on Feb. 24, when it plunged sharply after reaching the same level.

We expect the bulls to make another attempt to break out of the overhead resistance within the next 2–3 days. The next target to watch on the upside is $5.8370. The uptrending moving averages and the RSI in the positive zone suggest that the path of least resistance is to the upside.

Our bullish view will be negated if the EOS/USD pair turns down from the current levels and slips below both the moving averages. Therefore, traders can keep the stops on the remaining long positions at $3.70. We shall recommend booking partial profits again and trailing the stops higher within the next few days.

Litecoin (LTC) is facing stiff resistance at $61.9044. Repeated attempts by the bulls to scale this level have failed. Traders can book profits on 40 percent of the remaining long positions above $60 and keep the stop loss on the rest at $55. We have suggested booking some more profits at current levels due to the failure of the bulls to rise above the resistance and the negative divergence on the RSI is making us uncomfortable.

A fall below the 20-day EMA will be the first sign that the LTC/USD pair is losing strength. We anticipate a deeper fall if the bulls fail to defend $56.910. Below this support, the level to watch on the downside is the 50-day SMA. Contrary to our expectation, if the bulls push the price above $62, a rally to $69.2790 will be in the cards.

Bitcoin Cash (BCH) has been consolidating in a tight range for the past four days. A breakout of $177.30 will complete a rounding bottom formation that has a pattern target of $249.60. Both the moving averages are trending up gradually and the RSI is trading close to the overbought zone. This suggests that the bulls are at an advantage.

However, if the BCH/USD pair turns down from the current levels and plummets below the moving averages, it will lose momentum. The digital currency has a history of vertical rallies and waterfall declines. Hence, traders can protect their long positions with the stop loss at $140.

Binance Coin (BNB) has extended its fabulous run as it attempts to break out of the stiff overhead resistance at $18. If the bulls can sustain this level, there is no visible resistance until the price reaches near $25. This will bring the digital currency close to the lifetime highs and will be a big sentiment booster.

We like how every support is being held and the cryptocurrency has been making a higher floor for itself during the rise. Both the moving averages are trending up and the RSI is close to the overbought one, which suggests that the bulls are firmly in the driver’s seat.

Traders can keep the stop loss on the remaining long positions at $15. We shall trail this higher if we find signs of profit booking at the lifetime highs.

Our bullish assumption will be invalidated if the BNB/USD pair fails to sustain above $18 and reverses direction. A fall below the 50-day SMA will indicate that the current leg of the up move is over.

Stellar (XLM) is struggling to break away from the 20-day EMA. The only positive is that the bulls have sustained above the 20-day EMA for the past five days. But if the price does not start an up move soon, it might face selling pressure again.

A breakdown of the 20-day EMA can sink the XLM/USD pair towards the uptrend line. If this support also gives way, the trend will turn in favor of the bears.

However, with both the moving averages gradually sloping up and the RSI in the positive territory, the path of least resistance is to the upside. We therefore suggest that traders hold the long positions with stops at $0.08.

Cardano (ADA) came close to $0.075 level both on March 29 and 30. We recommended that traders book partial profits closer to this level in our previous analysis.

The trend remains bullish as both the moving averages are sloping up and the RSI is in the overbought zone. Any dip is likely to be supported at the 20-day EMA. The next target on the upside is $0.082 and if that is crossed, the up move can extend to $0.094. Hence, we suggest traders trail the remaining long positions with stops at the breakeven. We shall soon suggest moving the stops to just below the 20-day EMA.

The ADA/USD pair will lose momentum if the price fails to rebound off the 20-day EMA. The trend will turn negative on a breakdown and close below the 50-day SMA.

Tron (TRX) is currently attempting to break out of the moving averages and the downtrend line. If the bulls sustain this breakout, the price can rally to the next overhead resistance of $0.02815521. This is a critical resistance as the price has repeatedly returned from it. Notwithstanding, if the bulls scale above it, a new uptrend is likely to start that can carry the digital currency to $0.040 and above it to $0.0480.

Due to the strong upside potential, we might again suggest long positions on a breakout and close (UTC time frame) above $0.02815521.

Contrary to our assumption, if the TRX/USD pair fails to break out and sustain above $0.02815521, it might remain range bound for a few more days. It will turn negative if it plummets below $0.01830.