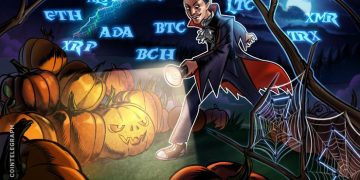 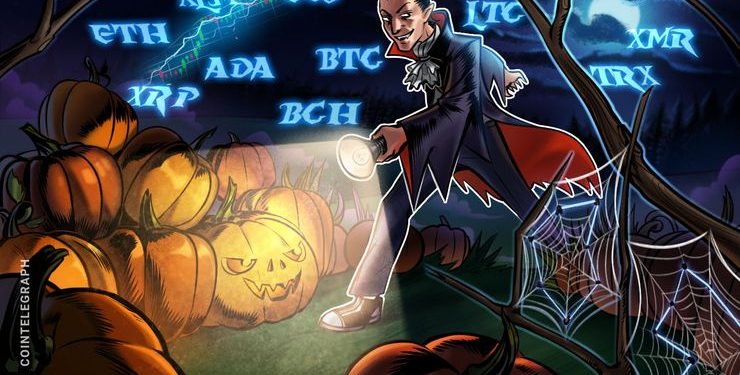 Bitcoin’s White Paper was published ten years ago, today. From an obscure beginning in 2008, Bitcoin has become a worldwide phenomenon. Thousands of cryptocurrencies have been born since then, but Bitcoin has managed to maintain its relevance. Currently, its dominance over the market is hovering around the 54 percent mark.

With such an impressive rise, Bitcoin has attracted several supporters and critics alike. Many traditional investors and economists remain skeptical of Bitcoin, whereas many millennials and technology enthusiasts see a bright future for it in the next decade. Analysts have set very aggressive targets for Bitcoin in the next few years.

Though the next decade will continue to attract new investors to Bitcoin, a parabolic rise similar to that of the first decade, is unlikely. The rise will be more measured and gradual with sporadic spurts in between.

Bitcoin is looking weak. There are no signs of a pullback yet. The RSI has dipped into the negative territory, and the 20-day EMA is turning down, which shows that the bears have an upper hand in the short-term. A fall to $6,200 and thereafter a retest of the $5,900–$6,075.04 support zone looks probable.

The failure of the bulls to capitalize on the break out of the descending triangle is a negative sign. If the bears sink the BTC/USD pair below $5,900, a quick fall to $5,450, and further to $5,000 is possible.

Cyclically, the digital currency closes the year with strength. In the past three years, November and December have been strong months. Therefore, we anticipate a similar move this year. If the bulls succeed in breaking out of $6,831.99, a rally to $7,400 is likely. Traders who own long positions can keep their stops at $5,900.

Ethereum has been trading below $200 for the past three days. A retest of the $188.35 mark, which has held on the two previous occasions, is likely.

The 20-day EMA is turning down and the RSI is in the negative territory, which suggests that the short-term trend is down. A break of $188.35 can push the price to the next lower level of $167.32, which should act as a strong support. A break of this level will be negative, sinking the pair to the next support at $136.

The trend on the ETH/USD pair will change if the bulls break out of $249.93. Such a move is likely to attract buyers, who can push the price to the next resistance at $322.57.

Ripple has been trading in a tight range since Oct. 16. The RSI is also close to the midpoint. This shows balance between supply and demand.

Bitcoin Cash broke down of the symmetrical triangle on Oct. 29. An attempt to climb back into the triangle failed on Oct. 30. If the price slides below the Sept. 11 low of $408.0182, we anticipate a fall to the next support at $300. Therefore, traders who are long can keep their stops at $400.

The declining 20-day EMA and the RSI in the negative zone show that the sellers are in command. The bearish view will be invalidated if the BCH/USD pair bounces from the current levels and breaks out of $500. Until then, the rallies will be sold into.

The bulls are attempting to hold EOS above $5. However, they have not been able to achieve a bounce, which shows a lack of buying at higher levels.

The bulls might attempt to support Stellar at the trendline, below which a fall to the next support at $0.2 is probable.

If the bounce from the current level scales above the moving averages and the downtrend line of the descending triangle, it will signal a change in trend. The XLM/USD pair can be purchased on a breakout above $0.27, which can result in a rally to $0.36, with a minor resistance at $0.304.

If the LTC/USD pair bounces from the current levels, it will face resistance at the moving averages, which are trending down, and the downtrend line of the descending triangle.

A break out of $60 will indicate the probability of a change in trend that will be confirmed on a close above $69.279. We shall wait for a new buy setup to form before suggesting a trade on the pair.

Cardano has continued its journey southward after breaking down of the symmetrical triangle. It can drop to $0.060105, which will act as a strong support. If the bears sink the price below $0.060105, the downtrend will resume.

The bulls are trying to hold the immediate support at $0.068989. If the virtual currency rebounds from the current levels and breaks out of the moving averages, a rally to the top of the range is probable.

The ADA/USD pair will signal a reversal if it sustains above the range. The traders should wait for buying to resume before initiating any long positions.

TRON continues to slide lower, towards the next support zone of$0.0183–$0.0225. The moving averages are still flat, which suggests that the range bound action is likely to continue.

The TRX/USD pair will show signs of a turnaround if it scales $0.03. The breakout can carry the price to the next overhead resistance at $0.0415.