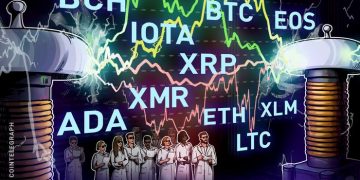 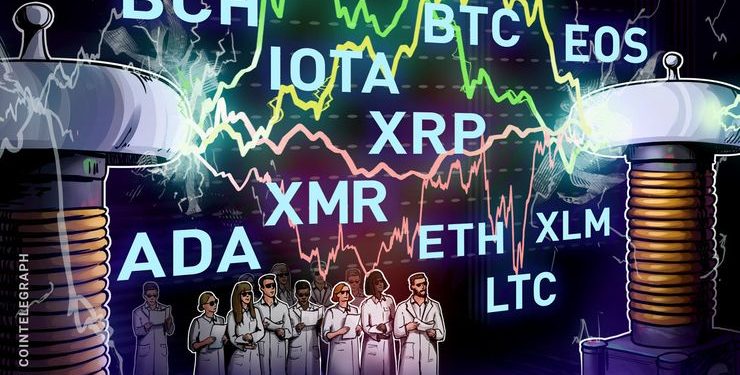 A new study from the Initial Coin Offering (ICO) advisory firm Satis Group has claimed that the price of Bitcoin (BTC) could soar to $98,000 within the next five years. However, the company forecasts a lower target for both Bitcoin Cash (BCH) and Ripple (XRP) in that period. According to the research team, Ethereum (ETH) will also lose about half of its share in the next ten years.

The job market in the blockchain and the cryptocurrency industries in Asia is growing and many are shifting from their traditional jobs to be a part of this budding technology.

Japanese messaging app LINE is planning to launch its own cryptocurrency in September. Rakuten, the Japanese e-commerce giant has purchased a domestic crypto exchange, Everybody’s Bitcoin. The government of a South Korean province Gyeongsangbuk-do plans to issue its own digital currency.

This shows that the fundamentals of the sector are improving. So, is this the right time to buy or can the cryptocurrencies fall further before bottoming out? Let’s find out.

Bitcoin has been struggling to stay above the 50-day SMA for the past two days. This shows a lack of follow up buying at higher levels. The only positive is that the bulls have been able to defend the 20-day EMA and the digital currency has managed to close (UTC time frame) above the 50-day SMA on all the three days.

The 20-day EMA has turned up, which shows that the bulls have a short-term advantage. If prices break out of $7,127, the BTC/USD pair can pick up momentum and scale above the 50 percent Fibonacci retracement level of $7,198.3.

The 61.8 percent Fibonacci retracement level of $7,504.68 might act as a minor resistance, above which the rally can extend to $7,940.89. Once the prices sustain above $7,200, the traders can raise their stops to break even. For now, the long positions can be maintained with the recommended stops.

Our bullish view will be invalidated if the bears sink prices below the 20-day EMA. In such a case, the digital currency will become range bound between $5,900.06 and $6,955.79. Bitcoin will turn negative only if the prices sustain below $5,900.

Ethereum has recently been one of the weakest cryptocurrencies that we cover. It has not even touched the 20-day EMA in the past few days. This shows a lack of buying support at the current levels.

It has formed a symmetrical triangle at the lower levels. If the bears sink the prices below the triangle, the ETH/USD pair can slide to $249.93 and further to $205.

If the bulls break out of the triangle, a move to $358 is probable. However, the 20-day EMA and the downtrend line are formidable resistances on the upside, hence, we shall wait for a buy setup to form before proposing any trades on it.

Ripple has failed to break out of the downtrend line 2 for the past three days. It has also slid below the 20-day EMA, which shows a lack of buyers at higher levels.

A move above the 50-day SMA will indicate strength and can result in a rally to $0.5. The trend will change if the XRP/USD pair sustains above the downtrend line 1.

If the bears sink the virtual currency below $0.31, a retest of the August 14 lows is possible. We don’t find any reliable bullish patterns at the current levels, hence, we are not suggesting any trades on it.

Bitcoin Cash hasn’t done much in the past few days as it remains stuck between $500 and the 20-day EMA.

Both moving averages are sloping down, which shows that the bears are still in command. The BCH/USD pair is likely to gain strength above the 50-day SMA.

On the downside, the virtual currency will become negative if the $500–$473.906 support zone breaks down. We shall wait for the trend to change before suggesting any long positions on the pair.

EOS has stayed above the 20-day EMA and $5.65 for the past three days, which is a positive sign.

For the past two days, the EOS/USD pair has been facing resistance at the 50-day SMA. The bulls have not managed a close (UTC time frame) above this moving average since June 8. A close will indicate a probable change in trend. Therefore, we maintain the buy recommendation made in the previous analysis.

The rising 20-day EMA and the flattening 50-day SMA increase the possibility of a bullish crossover if the price sustains above $6.5. Our bullish view will be invalidated if the price turns down from the overhead resistance.

Stellar continues to trade inside the range of $0.184–$0.24987525. The longer it stays in the range, the stronger will be the eventual breakout or breakdown from it.

The XLM/USD pair will complete a bearish descending triangle pattern if it breaks below the $0.184 support level.

After failing to break out of the range on August 28 and 29, Litecoin is currently trying to hold  the support at the 20-day EMA. Both moving averages are flattening out. This shows that the selling pressure has reduced and a change in trend is probable.

The first sign of strength will be when the bulls break out and sustain above the overhead resistance at $62.319. The short-term traders can stay on the long side once the virtual currency scales above $64. Such a move might face resistance at the 50-day SMA, the downtrend line and at $74.

We shall turn bullish on the LTC/USD pair after it breaks out and sustains above $74 for three days. Positional traders should wait for additional confirmation before initiating any long positions.

Currently, the prices have slipped below the 20-day EMA. The flattening moving averages point to a probable consolidation in the near-term.

A break out of the 20-day EMA will carry the ADA/USD pair to the 50-day SMA. We shall turn positive if the bulls succeed in sustaining above $0.13.

Our neutral stance will be invalidated if the bears break down of $0.083192. We shall wait for a new buy setup to form before proposing any trades.

IOTA has turned down from the resistance zone between the 50-day SMA and the downtrend line but found support close to the 20-day EMA. It could not reach $0.82 where we had suggested booking partial profits.

On the downside, the 20-day EMA and $0.5750 will act as strong supports. Both moving averages have flattened out, which shows that the selling has subsided and a change in trend is likely. Therefore, the traders can continue holding the existing long positions with the recommended stops.

Monero has held above the 20-day EMA for the past four days. It is currently trying to break out of the horizontal resistance at $109.22.

The zone between the current price and the downtrend line is likely to act as a stiff resistance.

The XMR/USD pair has not broken out of the downtrend line convincingly since topping out in December of last year. If the bulls succeed in closing (UTC time frame) above this resistance, it indicates a probable change in trend. The flattening moving averages indicate that the bears are losing their grip.

Therefore, we retain the buy recommendation provided in the previous analysis.

Which Is the Most Usable for Merchants?