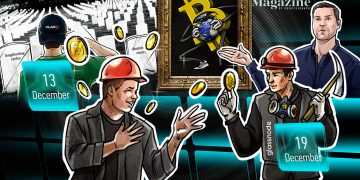 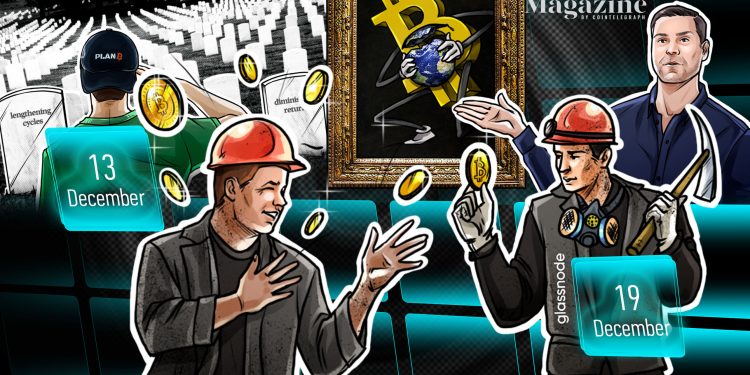 Another day, another all-time high — Bitcoin hits $24,000 in weekend surge

In an extraordinary run, Bitcoin’s price has surged by more than 25% in the space of a week, with Ether hitting yearly highs and altcoins such as Litecoin performing strongly, too.

On-chain analyst Willy Woo has proclaimed that $55,000 is the next landmark for Bitcoin to reach — asserting that $100,000 is a “ridiculously low” target. Meanwhile, Quantum Economics founder Mati Greenspan believes “things are just getting started.”

Early miners have been turned into millionaires, with the number of Bitcoin addresses holding at least $1 million surging by 150% this week. And for a time, anyone who had ever bought Bitcoin was officially in profit.

Bitcoin’s network fundamentals paint a very different picture to the 2017 bull run, but some things never change: as BTC surged beyond $20,000, both Binance and Coinbase suffered outages.

As the Lambo brochures land on doormats, with the moon in sight, what’s next?

Cointelegraph analyst Michaël van de Poppe says a drop to the $18,500 region in the short term shouldn’t be ruled out but adds there could be further room to run as price discovery continues.

He believes that $19,500 has now been turned into a critical level to hold. The next level of interest is found at $25,800, which could be the next marker for a potential top.

Van de Poppe wrote: “Such vertical rallies aren’t sustainable for long. Thus, a correction will occur at some point. However, predicting when it happens is anyone’s guess, as Bitcoin may easily run to $30,000 and then see a 30% correction.”

It’s also shaping up to be a “significant quarter” for altcoins. Historically, Bitcoin dominance tops out in December, and a strong quarter for smaller cryptocurrencies follows. The question now is if, and when, Bitcoin’s violent correction will occur.

The options market is pricing a potential Bitcoin rally to between $36,000 and $50,000, indicating many traders believe the surge will continue in 2021. A larger uptrend in the first half of 2021 would see BTC replicate the post-halving activity it saw in 2017.

Institutions are now making mincemeat of whales — and they’re beginning to look like plankton. As long-term investors rush to offload Bitcoin at a profit, big firms are lining up to snap up their crypto en masse.

A shortage of BTC on exchanges, coupled with institutional buying at over-the-counter venues, has laid the foundation for a fight over the remaining supply. Price rises are the only logical solution.

And there’s no sign of institutional activity slowing down, either, with some indicating that “there is going to be a generational allocation to this new asset class.”

Here’s the thing: Retail buyers aren’t even here. Twitter, Wikipedia and even Google search activity point to a world that’s unaware of Bitcoin’s surge. (That said, BTC has been getting increased coverage in newspapers — with my grandmother revealing she read about it over her morning cup of tea on Thursday.)

Tweets are only roughly where they were in January 2018; page views on Wikipedia are largely flat; and Google searches for “Bitcoin” have been less popular this week than they were in November.

BTC just doesn’t seem to have touched mainstream consciousness, and paradoxically, it seems many people are only prepared to buy crypto when it hits all-time highs.

The Coinbase IPO is coming, according to a SEC filing

One of crypto’s most-anticipated initial public offerings is now one step closer.

Coinbase has sent its draft registration for an IPO to the Securities and Exchange Commission. This is a big deal given how it’s one of the biggest names in crypto, with a reputation for working well with U.S. regulators.

According to the research company Messari, Coinbase could fetch a valuation of $28 billion if the IPO goes ahead. That’s a substantial rise compared with its most recent funding round in October 2018, which gave the company a price tag of $8 billion.

Reports suggest that Coinbase has approached Goldman Sachs to lead its IPO, but this is yet to be confirmed.

The Treasury has released its long-awaited proposal to restrict money services businesses, including U.S.-registered crypto exchanges, from dealing with self-hosted wallets.

Under the proposed rules, exchanges would have to verify “the identity of their customers if a counterparty uses an unhosted or otherwise covered wallet and the transaction is greater than $3,000.”

The Treasury has now given stakeholders 15 days to respond with their comments, and Coinbase CEO Brian Armstrong was among the first to express reservations about the rumored plan in November.

Several lawmakers have expressed opposition to the proposals, which could be regarded as an assault on the nature of peer-to-peer transactions. That said, the measures on the table are not as radical as some had feared they would be.

Analysts believe that the mooted restrictions won’t impact Bitcoin’s rally, arguing that the possibility of extra regulation has already been priced into the crypto market.

“One of Robinhood’s primary selling points was that it did not charge its customers trading commissions. In reality, however, ‘commission free’ trading at Robinhood came with a catch.”

The U.S. Securities and Exchange Commission

“We are not at the all-time-high juncture where the BTC Top Cap Model starts curving upwards. Let’s see how high she runs in 2021. $100k is a ridiculously low target at the current trajectory. $55k is the next landmark -> Bitcoin becomes a $1T macro asset bucket.”

“$ETH has started its run every December the last 3 years with at least 100%+ ROI over the following months. What makes you think this year will be any different? #Ethereum to $1000+ within the next few months IMO.”

“Sustained growth is likely from here, at least for the time being. We are being driven by corporations and billionaires now, not just retailers.”

“We have been waiting for this moment for years, and now that $BTC #Bitcoin has finally broken 20k, all bets are off.”

“I would NEVER recommend anyone take out a personal loan to buy ETH or other ethereum assets.”

There are oh so many predictions doing the rounds about what’s going to happen next.

DeVere Group CEO Nigel Green has proclaimed that Bitcoin will have another “record-breaking year” in 2021.

Green believes prices will explode by 50% and hinted that they could even double. On this basis, he expects BTC to trade between $34,500 and $46,000 at some point next year.

Robert Kiyosaki — the bestselling author of Rich Dad, Poor Dad — has also thrown his hat into the prediction ring. “A wall of institutional money” is coming to Bitcoin in 2021, he said, setting a target of $50,000.

There’s one man who is relieved that one of his predictions finally came true. Back in April, Mike Novogratz warned he may “hang his spurs” if BTC failed to reach $20,000 in 2020. He’s since tweeted to say he’s “glad I don’t need to.”

Unrelenting optimism over how Bitcoin will perform in 2021 doesn’t appear to be matched by everyday investors.

A Genesis Mining survey of 1,000 current and former U.S.-based Bitcoin investors suggests that just 17% believe BTC prices will exceed $50,000 in 10 years’ time. That’s despite the fact that this would only require an increase of 108% from current levels — with BTC surging by 230% year-to-date.

Robinhood has staved off a lawsuit from the Securities and Exchange Commission by agreeing to pay $65 million.

The SEC had accused the trading app of deceiving users as to where its money was actually coming from between 2015 and 2018.

Regulators wrote: “One of Robinhood’s primary selling points was that it did not charge its customers trading commissions. In reality, however, ‘commission free’ trading at Robinhood came with a catch: Robinhood’s customers received inferior execution prices compared to what they would have received from Robinhood’s competitors.”

Speaking to Cointelegraph, the head of Robinhood’s legal team stressed that this is all in the past, explaining: “The settlement relates to historical practices that do not reflect Robinhood today.”

Unfortunately, Robinhood’s legal woes may not end here, with reports emerging that securities regulators in Massachusetts are weighing up whether to file a case against the company for subjecting inexperienced investors to “unnecessary trading risks.”

Crypto users in the U.S. have been left confused and frustrated over the wording of a question about digital currencies on this year’s tax return form.

Form 1040 asks: “At any time during 2020, did you receive, sell, send, exchange, or otherwise acquire any financial interest in any virtual currency?”

This question has now been placed much more prominently — near the top of the form. But here’s the problem: There’s a lack of explicit guidance on the definition of a “virtual currency.”

One crypto tax specialist has likened the question to a “perjury trap.”

How to build an exemplary crypto exchange

Building a crypto exchange can be a daunting process, but there’s one question that’s often overlooked: How do you build an excellent exchange? Cointelegraph Magazine takes a look.

What updates have been added, and how soon can they be implemented? Here’s Julia Magas.

New to Crypto? Get Your Christmas Treats at Crypto.com