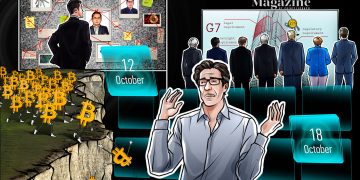 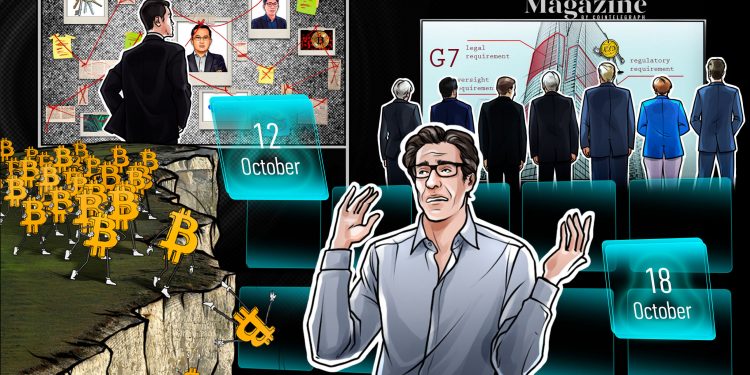 Calm before the storm? Analyst says $20,000 Bitcoin is possible in three months

Bitcoin volatility has fallen to a 16-month low, indicating that a sharp move is on the horizon.

Large fluctuations tend to follow prolonged periods of consolidation, and according to a Bitazu Capital founding partner, Mohit Sorout, BTC could reach its previous all-time high if it was to break out today.

There are other factors at play. The U.S. dollar has been weak recently, and traditionally, this leads to strength across other “safe haven” assets. Bitcoin exchange reserves have also continued to plummet, indicating there’s a shortage of sellers… or a lack of trust in centralized platforms.

Cointelegraph analyst Michaël van de Poppe says BTC must hold $11,000 for October’s rally to continue — paving the way for a retest of $12,000 in the short term. Meanwhile, a report by Stack Funds suggests BTC has support to climb all the way to $15,000 if historic trends repeat themselves this year.

But this optimism isn’t universal. JPMorgan Chase experts believe Bitcoin is slightly overvalued and think the asset could see selling pressure ahead.

OKEx, a major crypto exchange, spooked the markets this week by announcing that it had suspended withdrawals.

The company said one of its private key holders was “cooperating with a public security bureau” concerning ongoing “investigations.”

According to Caixin, OKEx founder Mingxing Xu — also known as Star Xu — was the executive who was questioned by authorities. The Chinese news agency also reported that he was investigated “at least a week ago” and had been absent at work for some time.

Industry executives have expressed surprise at how events unfolded. The Bitcoin Association’s president, Leo Weese, wrote: “That one person sits in China holding the keys to an entire offshore cryptocurrency exchange is probably the most surprising thing about this industry I learned this year. That customers don’t demand transparency about key management comes in at a close second, though.”

Staff at Coinbase fear that the exchange’s leadership are watching their every move and monitoring their messages, it has been reported.

According to Motherboard, the exchange’s newfound “apolitical” stance has led to allegations of surveillance and censorship, but in a leaked recording of an ask me anything session, CEO Brian Armstrong said the “silent majority” supported the move.

Elsewhere, it was claimed that Coinbase’s management had “stunted internal discussion” and forced employees to delete political Slack messages. The exchange responded to Motherboard’s claims by describing the accusations as “quite extreme and absolutely false.”

During an AMA back in June, Armstrong had reportedly resisted the idea of making a public statement in support of Black Lives Matter following the killing of George Floyd by police. However, he later backtracked and posted a series of tweets in support of BLM.

Coinbase has been hemorrhaging employees of late, with at least 5% of its workforce opting to take an exit package if they were unwilling to avoid political and social issues at work.

It’s been a wild ride for the FIL token following Filecoin’s long-awaited launch.

FIL initially rocketed by 118% before plunging by 80% as the cryptocurrency was listed on major exchanges — three years after the project’s ICO was held.

Now, the blockchain-based data storage platform is hoping to right the ship through a weeklong digital conference that begins on Oct. 19.

“Filecoin Liftoff Week” is going to be centered on education, infrastructure, interoperability, and future plans, with each day focusing on a different theme.

Despite the recent plunge in FIL’s value, the Filecoin team remains optimistic about the project’s future prospects: “This is only the beginning for the Filecoin network.”

And we end our news roundup with a painful story courtesy of Ripple’s chief technology officer David Schwartz.

He revealed that he and his wife came up with a “derisking plan” for their crypto investments in 2012 — and missed out on millions of dollars in profit as a result.

The Ripple executive also sold a significant sum of BTC for $750 apiece, and a large trove of XRP for $0.10.

He described himself as a “risk averse person with people who depend on me financially and emotionally” but admitted that selling his crypto at this bargain basement prices “hurt.”

“All your funds and assets are safe. The investigation concerns a certain private key holder’s personal issue only.”

“That one person sits in China holding the keys to an entire offshore cryptocurrency exchange is probably the most surprising thing about this industry I learned this year. That customers don’t demand transparency about key management comes in at a close second, though.”

“The Chinese government is cracking down on money laundering using cryptocurrency for telecom fraud, and centralized exchanges are in a very dangerous state.”

“I do believe we’ll be seeing a relatively boring and corrective quarter on the cryptomarkets. In history; $ETH frequently bottoms out in December, to start running the quarter after. $BTC dominance to run up, to have an altseason in Q1 2021. Continuing the patience.”

“You can only try to win the hand with the high hand: gold, silver and Bitcoin. You can’t win playing the low hand unless you’re a sovereign state or a major investment bank, and that’s the game today.”

“We’d like to keep tabs on what other central banks are doing and learn from them, not just from China but from other countries.”

“Our eyes are peeled on the $12,000 key resistance level, as we expect further consolidation around current levels going into the elections before breaking into the upside going forward.”

“It’s definitely sending a message to the crypto world that when there are U.S. users of a product or a service, there’s going to be enforcement of U.S. laws.”

Could there be a massive Bitcoin shortage?

Rapid growth of institutional investments in crypto has prompted 10T Holdings co-founder Dan Tapiero to warn that shortages of Bitcoin could be on the horizon.

He warned: “SHORTAGES of Bitcoin possible. Barry’s Grayscale Trust is eating up BTC like there is no tomorrow. If 77% of all newly mined turns into 110%, it’s lights out. Non-miner supply will get held off market in squeeze. Shorts will be dead. Price can go to any number.”

Institutional demand surged rapidly after March when Bitcoin suffered one of its steepest falls in recent history. This indicates that big players see staying power in the world’s biggest cryptocurrency.

The speculation about a potential supply-side crisis around Bitcoin also coincides with the post-halving cycle. Bitcoin went through its third halving on May 11, and historically, halvings lead to extended bull runs in the two years that follow.

G7 will oppose Libra launch until regulations in place

The G7 has warned that it will initially oppose the launch of Facebook’s Libra project.

In a statement that pulled few punches, the Group of Seven wrote: “The G7 continues to maintain that no global stablecoin project should begin operation until it adequately addresses relevant legal, regulatory, and oversight requirements through appropriate design and by adhering to applicable standards.”

The statement was co-authored by central bankers and finance ministers from the United States, Canada, Japan, Germany, France, Italy and the United Kingdom.

The G7 has previously raised concerns over how to ensure digital assets comply with Anti-Money Laundering laws, consumer protection rules and other regulatory matters.

Last October, one of its reports also warned that global stablecoins pose a threat to the global financial system.

Europol has announced that 20 individuals suspected of working for the “QQAAZZ” criminal network have been arrested in an operation that spanned 16 countries.

The organization is accused of laundering tens of millions of euros for top cybercriminals since 2016. About 40 homes were searched as part of “Operation 2BaGoldMule,” with arrests made in Australia, the U.S, the U.K, Portugal, Spain, Latvia and Poland.

On the same day, a 40-year-old man was arrested in New Zealand for using cryptocurrency to launder more than $2 million for criminals — as well as by purchasing luxury vehicles including a Lamborghini and Mercedes G63.

And in the U.S, six individuals have been charged for their participation in a conspiracy to “launder millions of dollars of drug proceeds on behalf of foreign cartels.”

The trustee of the now-defunct Japanese cryptocurrency exchange Mt. Gox has obtained another approval to extend the deadline for submitting a rehabilitation plan — this time to Dec. 15.

As reported by Cointelegraph, Nobuaki Kobayashi received a number of similar deadline extensions in March 2020 and April 2019.

The Mt. Gox crypto exchange is known for encountering the largest cryptocurrency hack in history. The exchange lost a total of 1.35 million Bitcoin in two hacks in 2011 and 2014.

Despite the hacks happening years ago, Mt. Gox customers have still not received compensation for their stolen funds.

Kobayashi, a Japanese lawyer who was appointed to oversee the civil reimbursement process, reportedly has 150,000 BTC to repay users, but the refund process has been delayed multiple times since 2019.

The curious case of Coinbase — Employees driven out by “apolitical” stance

Coinbase’s new “apolitical” culture has led to some employees taking severance packages, as the crypto community reacts with ambivalence.

The next big treasure: Corporations buy up Bitcoin as a treasury reserve

The entry of firms like Square, MicroStrategy and Stone Ridge may open the BTC floodgates and provide “confidence for the rest to follow,” writes Andrew Singer.

Andrew Fenton talks to Jack Lu about his new DeFi platform Bounce, which has been described as a decentralized version of eBay, Sotheby’s or Christie’s.