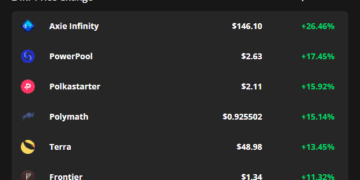 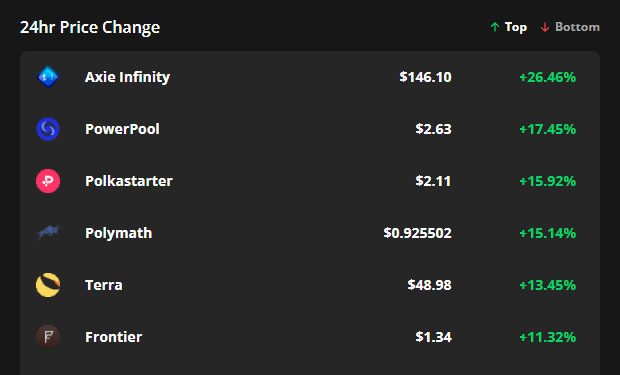 However, several altcoins were able to recover, and at the time of writing, the crypto gaming and decentralized finance sectors were both experiencing continued growth in popularity.

Axie Infinity is a blockchain-based battle and collecting game that has been one of the breakout stars of 2021. In addition to posting a stellar 5,000 percent rally, the game has also assisted in introducing the general public to the benefits of play-to-earn games and the income opportunities that they provide, as well as the power of blockchain-based battle and collecting games.

Several months have passed since the market’s conditions for AXS were favorable, according to data from Cointelegraph Markets Pro.

AXS’s price began to rise on October 2 and rose into the dark green zone on October 3, barely one hour before it increased by 51 percent the next day, as depicted in the chart above.

After a live chat with the developers behind the project revealed some new details regarding planned updates, including the addition of Axie scores for each character, which will provide them new skills and effects during gameplay, the price of the game rose on Oct. 4.

With the formation of token pools and community voting, PowerPool is an Ethereum-based decentralized financial protocol that specializes in assisting users in accumulating governance power in Ethereum-based protocols.

The VORTECS™ data from Cointelegraph Markets Pro first detected an optimistic outlook for CVP on September 29, just a few days before the price increase that has occurred recently.

As can be seen in the chart above, the VORTECS™ Score for CVP moved into the green zone on Sept. 29 and reached a high of 74 two days later, roughly two days before the stock’s price began to rise by 60 percent over the next three trading days.
The increase in the value of CVP comes as a result of the project’s listing on the cryptocurrency exchange Binance and inclusion in the Binance Smart Chain.

Predictive VORTECS™ data from Cointelegraph Markets Pro first detected a bullish prognosis for POLS on Oct. 2, just a couple of days before the latest price increase.

In the chart above, it can be seen that the VORTECS™ Score for POLS began to rise on Oct. 2 and hit an all-time high of 74 roughly 29 hours before its price jumped by 23 percent the following day.

The increase in the price of POLS coincides with the project’s release of Polkastarter v2 to the community, which includes changes to the dashboard as well as the ability to stake POLS on Ethereum or the Binance Smart Chain, among other features.