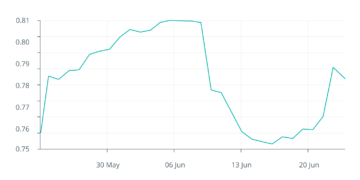 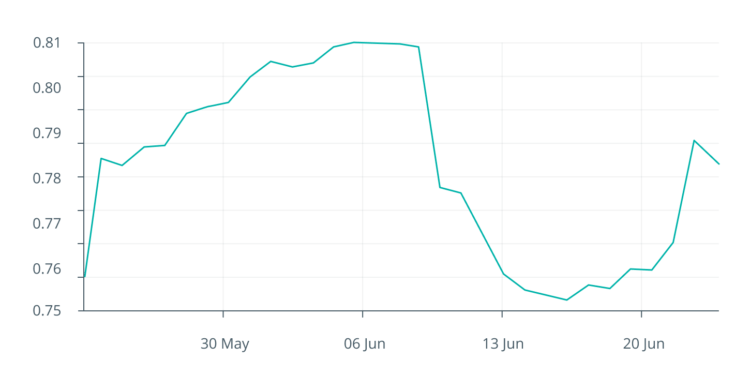 Cryptocurrency investors all over the globe have been facing a challenging time for over a month thanks, in large part, to the unprecedented price drops that have happened across the board in relation to most prominent digital currencies available in the market.

Since the start of June, the total market capitalization of this relatively nascent space has dipped from a little over $1.8 trillion to around $1.3 trillion, thus showcasing a loss of over 40%.

To make better sense of what these numbers represent, it should be highlighted that values ranging between 0 and 0.3 suggest little to no correlation between two assets, while those between 0.3 and 0.5 suggest a low correlation. On the other hand, once the aforementioned metric crosses the 0.5 mark, it becomes a territory of high-value interdependence. For example, values between 0.5 and 0.7 represent moderate correlation, and those above 0.8 denote an extremely high level of monetary association.

What does all this mean?

So, is this correlation bad for the cryptocurrency market and those holding or trading coins? Leo Cheng, co-founder of decentralized lending protocol C.R.E.A.M. Finance, said that while BTC has always been considered to be the strongest, safest store of value across the global crypto landscape, since April, Ether and a host of other altcoins have gained a lot of value in relation to the world’s largest cryptocurrency. He added:

“As part of this pullback, it is not surprising to see funds flowing back into BTC. Altcoins have historically been highly correlated and follow ETH’s lead. The surprise for many in the past months is how memecoins have outperformed DeFi tokens, given the ‘productive assets’ narrative.”

Cheng further noted that in addition to price volatility, various adoption metrics associated with the crypto market, such as the total number of users, network activity, have continued to hit all-time highs. “Builders in crypto haven’t stopped building. Market pullbacks reduce noise and give builders space to innovate,” he said.

Similarly, Antoni Trenchev, CEO of digital asset platform Nexo, told that the latest episode of China’s ongoing love-hate relationship with crypto has made a dent in Bitcoin’s price, only to set a sour pattern for the rest of the market. He added:

“When news like this comes and Bitcoin reacts, it usually entails serious consequences for the wider crypto asset universe. Also, only a few alts followed in BTC’s tracks, while it kept soaring in 2020, and it was mainly DeFi projects experiencing exponential growth during the so-called DeFi summer.”

Lastly, Trenchev is of the view that if inflation rates continue to increase after the record-high month of May, he expects cryptocurrencies to outperform all other asset classes this year, saying, “This could possibly translate into a renewed decline in Bitcoin’s correlation with altcoins, much like the peak of the market earlier this year.”

There is no denying that whenever the value of Bitcoin rises radically, the market at large follows. This is because when investors have an optimistic outlook for BTC, the sentiment usually trickles down into other altcoins.

That said, it has been proven time and again that the crypto market functions in a manner that is beyond anyone’s wildest imaginations, with things like FUD and short-term volatility playing major roles in dictating the monetary momentum of the sector.

Related: Joining the ranks: Bitcoin’s correlation with gold and stocks is growing

Winston, the pseudonymous moderator for automatic yield farming protocol Harvest Finance, prefers to look at things through a different lens, claiming that since Bitcoin’s dominance bottomed out on May 18, most major altcoins have just been steadily bleeding. He said:

“Most are going to move in tandem together; although, there are always some outliers. With the end of this uncertainty nowhere in sight, many are seeking refuge in stablecoins and stablecoin farms to weather the current volatility.”

In this regard, Blake Ho, chief operating officer of DeFi platform Furucombo, believes that during periods of such volatility, it is best for investors to take a step back and consider looking at assets other than Bitcoin, Ether, etc. in order to diversify their portfolios. “Allocating some funds to stablecoins for lending yields or some in promising projects for long-term investment can help reduce one’s overall risks,” he opined.

Back in Q1 2020, some prominent altcoins showcased BTC correlation values in excess of 0.91, basically suggesting that whenever Bitcoin rose or dipped, so did these digital tokens. This trend, by and large, continued through the entire year, but at the start of 2021, things began to change.

For example, all through January and February of this year, this correlation quotient dipped, only to once again cross the 0.8 mark, resulting in a number of altcoins rising in value by a huge margin. It is interesting to point out that ETH (along with many other top altcoins) tends to deliver higher returns during bull runs when compared with BTC. This was made especially evident during the bull market earlier this year when Ether was able to showcase gains of nearly 600% in comparison to Bitcoin’s returns of around 150%.

That being said, it will be interesting to see how things shape up from here on out, especially if Bitcoin manages to go on another bull run. And while the altcoin market will definitely get a boost if BTC surges, a pertinent question worth looking at is whether or not some of those larger altcoins will decouple — much like how ETH did when it scaled up to its all-time high of $4,200 — from Bitcoin and forge their own financial identity in the coming months.