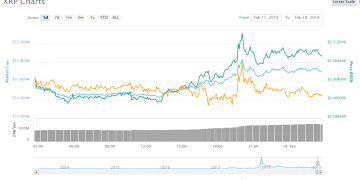 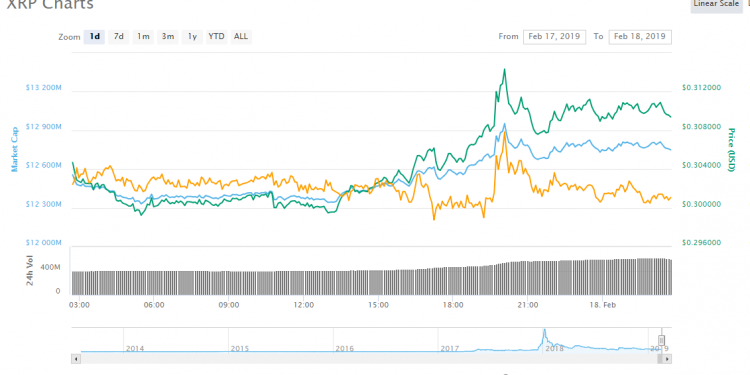 XRP is quite heading to the moon once again. With many crypto platforms seeing XRP and Ripple with potential move and adopting into their ecosystem, XRP, on the other hand also gaining a minor uptrend as a week start.

On Sunday, Feb 17, 2019, Twitter enthusiasts rolled out a tweet with quite interesting information on XRP’s end. It states TencentCloud confirms interest in Ripple’s currency, XRP.

wow this is more amazing news for #ripple and #xrp ☺️ https://t.co/XRpRW8MAWC

Headquartered in Shenzhen, China, Tencent is a technology giant which was founded in 1998. It is an internet-based technology enterprise, likely turning its move to blockchain industry in near future. However, no confirmed date on implementation is revealed yet, but it is still an optimistic view towards the third largest cryptocurrency. Particularly, Tencent in its blog embraces Ripple’s cryptocurrency and states;

Ripple is an especially attractive digital payment protocol for banks and other financial institutions due to the fact that transactions are fast, relatively inexpensive to process and highly secure thanks to blockchain technology. By both providing monetary support to the currency and incorporating it into popular platforms like WeChat and QQ, Tencent has given Ripple the best chance possible to catch on with users in China.

Although the official blog was published on Tencent’s website in mid last year, XRP enthusiasts leaked it out yesterday. In fact, they believe that such positive updates on XRP influenced today’s price. A Twitter enthusiast, XRP to the M’ states ‘We pumped one cent and everybody talks bullishly’ .

So we pumped one cent and everybody talks bullish. #xrp #hodl Just want to see where this brings us $1 should be bullish news, otherwise nothing major!

Besides Tencent’s update, XRP has also been listed on Spend Visa card which lets users store and spend XRP in almost 180 countries of the world. As Ripplecoinnews reported, XRP users in the US can access Spend Wallet in more than 40 locations to pay with XRP.

Although XRP market doesn’t surge with huge volume, but the present moment is a positive momentum. Stay tuned with ripplecoinnews to get more updates on XRP and Ripple.