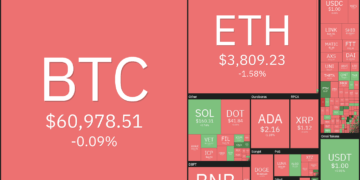 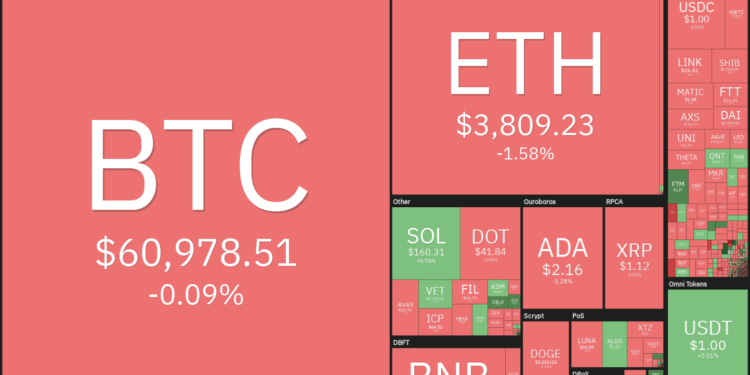 On Oct. 15, rumors that a Bitcoin (BTC) exchange-traded fund (ETF) could begin trading as soon as next week pushed the price of Bitcoin to $62,933, but the rally has since slowed.

According to certain market players, traders who bought the rumor of an ETF approval may sell on the news. QCP Capital, a cryptocurrency trading firm, stated in an update that the approval of futures-based exchange-traded funds is unlikely to deliver a long-term boost to Bitcoin prices comparable to what occurred in the fourth quarter of 2020.

While further volatility cannot be ruled out in the near future, investors should remain focused on the long-term trend and avoid getting caught up in tiny corrections that are a necessary part of the journey to new all-time highs.

Foxbit creator Joo Canhada claims that his daughter earned a 6,500 percent profit on the one Bitcoin gift she received upon her birth in 2017. Although she could not have traded the coin at such a young age, the results demonstrate that patient investors who are unfazed by a little decline can earn enormous profits.

Could Bitcoin’s ascension to a new all-time high entice altcoins to follow suit? Consider the charts of the top five cryptocurrencies that have the potential to outperform in the short term.

On October 15, bitcoin jumped past the $58,000 resistance level and the psychological figure of $60,000, setting a new high. Although the bears are seeking to stall the upward movement at $62,933, it is a good sign that the bulls have not lost too much ground in the process. This shows that traders are not closing their positions following the current up-move because they expect the market to continue to rise in the future.

In addition, the relative strength indicator (RSI) has moved into the overbought zone, indicating that bulls are in charge of the price action. If the price rises from its current level and breaks through the $62,933 to $64,854 resistance zone, the BTC/USDT pair might reach $75,000 in a short period of time.

The $58,000 level is the first level of support to keep an eye on on the downside. Breaking through and closing below this level may cause short-term traders to book profits, causing the price to drop under the 20-day exponential moving average ($54,336)..

A bounce off the 20-day exponential moving average (EMA) will indicate that sentiment is still bullish and that traders are buying on dips. A final attempt to restart the uptrend will be made by the bulls at that point. On the contrary, a break and closing below the 20-day exponential moving average will indicate that the bullish momentum has slowed.

On the 4-hour chart, the pair has been rising steadily, indicating a strong uptrend. Bears have not been able to get the price down to and keep it below the 50-simple moving average since the pair broke out of the symmetrical triangle in mid-February.

It is possible that the price would bounce off the 20-day exponential moving average (EMA), increasing the likelihood of a break above $62,933 because it will signal that traders are not waiting for a further decline before buying. This bullish assumption will be rendered worthless if bears are able to plunge and maintain the pair below the 50-day moving average. A move along these lines might pave the way for a decrease to $54,000, and ultimately to $52,290.

On Oct. 14, Ether (ETH) broke above the neckline and closed above it, completing the inverse head and shoulders pattern. The lengthy wick on the Oct. 16 candlestick indicates that bears are aiming to halt the uptrend in the $4,000 to $4,027.88 range.

If the price reverses from its present level, the ETH/USDT pair might fall to the neckline breakthrough level. This is critical defense for the bulls.
If price returns from this level, the bulls will attempt to clear the overhead barrier once more.

The bears are defending the psychological resistance at $4,000 while bulls are trying to keep the price above the 20-EMA. The RSI has dropped close to the midpoint and the 20-EMA is flattening out, suggesting a possible consolidation in the near term.

A break and close above $4,000 could signal the resumption of the up-move. Conversely, a break below the neckline of the setup will be the first sign that the momentum may be weakening. The pair could then decline to $3,400.

If bulls are able to keep the price above the downtrend line, the SOL/USDT pair may advance to the 61.80 percent barrier level of $177.80. This is a critical milestone for bears to defend because if bulls overcome it, the pair may advance to the 78.6 percent retracement level at $194.60 and then retest the all-time high at $216.

In contrast to this belief, if the price declines from the current level or the overhead resistance and breaks below the moving averages, this indicates that traders are exiting positions during pullbacks. The pair could then fall below the key support level of $116.

For the last few days, Polygon (MATIC) has traded in a wide range between $1 and $1.80. The 20-day exponential moving average ($1.32) has begun to rise and the RSI has entered positive territory, indicating that bulls are seeking to regain control.

The MATIC/USDT pair has the potential to increase to $1.80, which would represent a significant resistance level. If the price reverses from this resistance, the pair may fall to the 20-day exponential moving average (EMA).

A strong rebound off of this support level will indicate that market sentiment has shifted to the bullish side and that traders are buying on dips. It will boost the likelihood of a break and a close above $1.80 as a result of this.

Both moving averages are rising upward, and the relative strength index (RSI) is in the positive zone, indicating that bulls are in control in the short term. The bulls were able to lift the price above the overhead resistance zone of $1.45 to $1.50, but selling at higher levels has sent the price back into the zone of resistance.

If the stock bounces back off the 20-day exponential moving average, the bulls will make one more try to resume the uptrend. A breakout and closing above $1.63 might pave the way for a climb above $1.80 if the trend continues. If the price continues to fall and breaks below $1.45, this bullish outlook will be rendered meaningless.

Fantom’s FTM cryptocurrency is now experiencing a significant uptrend. The bulls were successful in defending the breakout level at $1.94, showing that investor mood is still favorable and that traders are buying on dips in the market.

The upward-sloping moving averages show a buyer’s advantage, but the negative divergence on the relative strength index (RSI) indicates that the bullish momentum may be waning. If bulls are able to push the price over $2.45, the upswing may be extended, with the next target being $3.20 as a result.

If, on the other hand, the price declines from $2.45, the FTM/USDT pair may drop to $1.94 and consolidate between these two levels for a few days before rising again. A break and closure below the 20-day moving average ($1.85) may herald the beginning of a more significant drop.

The bulls are currently seeking to keep the price above the lower boundary of the declining channel. If they are successful in doing so, the pair might jump to $2.45. This level may prove to be difficult to surpass, but if bulls are able to do so, the upswing may restart.

Alternatively, if the price is unable to maintain its position above the channel, it will signal that demand at higher levels has dwindled. Following that, the pair may continue to trade within the channel. It is possible that the pair will fall below $1.50 if it breaks and closes below the channel.