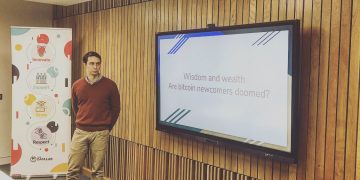 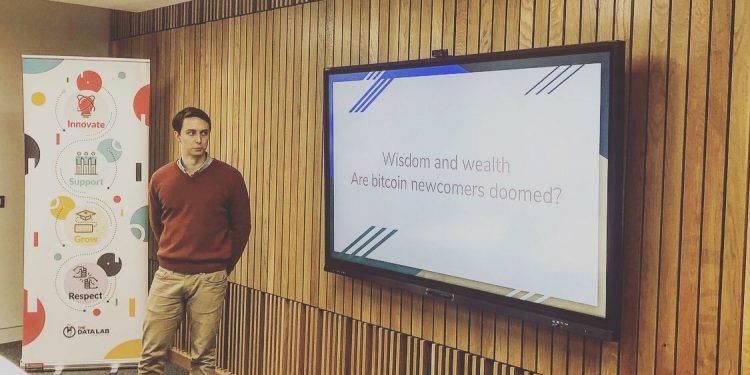 This reporter attended his first bitcoin meetup in sunny Scotland on Thursday.

It took place in the Bayes Centre – Edinburgh University’s snazzy artificial intelligence and data science hub. It also happens to be the spot where IOHK, the creators of the Cardano cryptocurrency, helped establish a Blockchain Technology Laboratory.

The topic of the meetup, “Bitcoin, Wealth and Wisdom,” afforded a forensic examination of the largest cryptocurrency’s rollercoaster cycle of price bubbles and corrections with plenty of examples of the emotional trauma that accompanied the ride.

But what appeared, prima facie, to be nothing more than a roomful of rabid maximalists, on closer inspection turned out to be a bunch of canny investors.

“It’s not so much that bitcoin is great, it’s that fiat is so bad,” said an asset manager who asked to be identified only as David. “Going back to the gold standard would be the only thing that would really hurt bitcoin.”

A recurring theme among veterans and newbies alike was buying in after the 2017 price bubble, when bitcoin dropped back down to around $3,500 during the 2018 doldrums.

Kind of fitting to encounter prudent financial behavior, this being Scotland. And of course, not forgetting that Thomas Bayes, the logician and theologian who studied at Edinburgh in 1719, is generally associated with advanced theories around machine learning and probability.

CoinDesk spoke with a number of investors at the meetup to hear what drew them to bitcoin in the first place.

I read the bitcoin white paper and was like, ‘Yeah, this is massive.’ Not long after that, all this hype was starting because of the big price increase. I have to say, the price increase made me hesitant. I’ve been through the dot-com boom, and it was kind of reminiscent of that.

I didn’t buy on the up-shoot. I waited a while for the top to pop. After it dropped down to about $3,000, I was worried the miners might have taken too big a loss and that would have fundamental consequences. So I waited a bit longer. Then I started to buy at about $5,000.

I tend not to disclose how much bitcoin I own but I can say it’s about 5 percent of my disposable worth. I might increase that.

I first heard about bitcoin while browsing Tom’s Hardware and I saw these questions about what is the best graphics card for mining bitcoin. I got into mining but had no idea these coins would really be worth anything.

I don’t count myself as a bitcoin maximalist. I like to stay rational.

Yes, I’m a neuroscientist. I graduated from Edinburgh University. I’m pretty interested in bitcoin. This is not my first meetup.

I would say I’m interested in the way people react to bitcoin’s price going up and down, for instance. Like what’s going on inside their brains.

My story is that I wanted to buy a motorbike and I had around £2,000 in savings. My dad told me not to burn through my capital but try and use it to make a profit. ‘I don’t care if you buy stocks,’ he said, ‘or if you set up a lemonade stand, or if you buy Greek tobacco and sell it in the UK.’

I started to make a theoretical portfolio of stocks and realized I’d have a Ph.D. before I could buy a motorbike. It was when I was looking for alternatives that I discovered bitcoin. I started buying in about September 2017 when it was around $4,000. I went back to Greece in December and cashed out at $18,000.

I ended up restoring my grandfather’s motorbike in Greece and I also bought another one when I got back to the UK.

I bought into bitcoin after it reached $20,000 when it went back down to $3,000. I don’t have any bitcoin at the moment. I sold it. I am looking forward to buying some more.

I have been playing around trying to develop with smart contracts but have not done any commercial work with that.

I bought bitcoin first in early 2013. I think it was around £100 or something like that. I sold it a little bit later. I made some money but I definitely would have made a lot more if I sold it now.