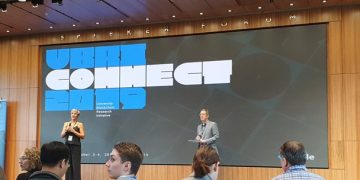 Ripple is presenting its University Blockchain Research Initiative (UBRI) on a big scale. The giant kickstarted its 1st ever annual academic event of the UBRI program on October 3 which ends on October 4, 2019.

Launched in June 2018, Ripple’s UBRI program has expanded its global footprints across 33 universities across 14 countries, as per the official report published in July 2019. UBRI is Ripple’s effort to enhance the awareness of blockchain tech among the students. Ripple defined it as;

Ripple’s Exec on stage at #UBRICon2019

Famously known as UBRI Connect 2019 or #UBRICon2019, the event is scheduled for two days “October 3 -4, 2019” which gathered URBI faculty, researchers, grad students, and other special guests. More details of the conference remained to be seen but the Ripple’s officials and XRP community members were quick to share the ongoing updates of the event.

As per the latest tweet of Ripple, Doug Purdy discussed the new developer platform that Xpring has recently announced. According to him, XRP is the most effective means to bridge between boundaries. In his words;

The goal with everything we are doing here is how we can make it possible for the 23 million app developers…building [apps] for the android stores, iOS…How can we enable them to put money at the center of their applications… We believe #XRP is the most important, most effective means to bridge between boundaries that we see geographically and we certainly see from a monetary perspective, Doug Purdy said speaking at the Ripple’s UBRI Connect 2019.

“We believe #XRP is the most important, most effective means to bridge between boundaries.” @XpringDev VP of Engineering Doug Purdy shares how we’re enabling #developers to put money at the center of their applications. #UBRICon2019 pic.twitter.com/w2OU0FA3CX

We think XRP will play a very important role in a federated hydrogenous world that we know we are living and we think it is the most imp tool to bring between these things. We can give those kinds of tools to developers.. [ which] would be pretty excited at what they’re gonna build.

Moreover, in a different session, Ripple CTO talked about the “Internet of Value” wherein he also sheds light on differentiating RippleNet with Xpring. He said;

Great speech by Ethan ????: “We think building the #InternetofValue is akin to building the internet.” – @ethanbeard at #UBRICon2019 #xrp pic.twitter.com/2i1tsI5bLt

Ripple’s UBRI Connect 2019 is the first annual conference by Ripple ahead of its yearly event, Swell 2019 which is hosted for two days on November 7-8 in Singapore. However, there is no significant price movement in XRP’s daily trading value ( which currenlty  sits with $0.24 against USD) despite the hype of UBRICon2019, whether or not Swell 2019 push XRP forward is still a matter of time.

What do you think readers?