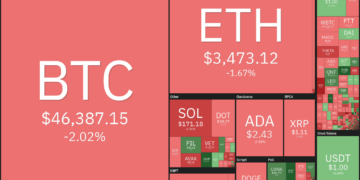 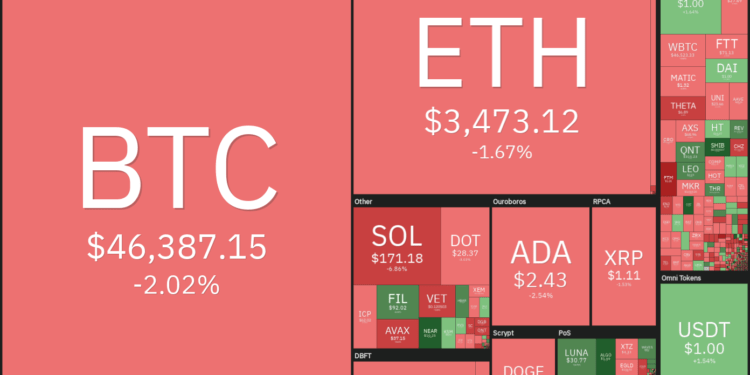 Analysts believe that the liquidation of over-leveraged positions is to blame for Bitcoin’s (BTC) precipitous drop on September 7. According to Bybt data, over $3.68 billion worth of long positions in the Bitcoin options market were liquidated in the last 24 hours.

According to Whalemap, an on-chain monitoring resource, the fall was primarily caused by whales who had recently purchased their Bitcoin, rather than by HODLers who were holding onto their coins. Separately, analyst Willy Woo stated the following:

“Leverage markets sold off but investor buying just got stronger.”

Every bull market has its fair number of corrections, during which the weaker hands are shaken out and the stronger hands are able to consolidate their positions more effectively. Investors who believe in the long-term story should not be alarmed by short-term corrections, according to this logic.

Is the correction in Bitcoin and other cryptocurrencies complete, or may there be another leg down? In order to discover out, let us look at the charts of the top-10 cryptocurrencies.

Bitcoin saw extreme volatility on September 7 when it plummeted from an intraday high of $52,920 to an intraday low of $42,843.05. The cryptocurrency was trading at $42,843.05. As evidenced by the extended tail on the day’s candlestick, strong buying at lower levels culminated in a significant comeback by the close.

Assuming the price remains within the zone, bulls will attempt to push it higher than the 20-day exponential moving average ($48,216). If they are successful, the Bitcoin/USDT pair might soar to $52,920 once more, but the bears are not going to give up so quickly this time.

A decrease in the relative strength index (RSI) to below 47 and the beginning of a downward trend in the 20-day exponential moving average (EMA) indicate that bears have made a strong comeback. If the price moves lower from the 20-day moving average, the bears will attempt to push the pair below $42,451.67 once more. If this occurs, the pair may be forced to undertake a more severe corrective phase.

The failure of Ether to increase and maintain a price above $4,000 could have prompted aggressive profit-taking on the part of short-term investors.
After the price fell below the immediate support level of $3,705.05., the selling became more aggressive.

The bulls were unable to halt the collapse at the 20-day exponential moving average ($3,486), resulting in a dip to the important support level of $3,000. According to the long tail on the day’s candlestick, this level attracted significant purchasing, and the ETH/USDT pair staged a robust comeback as result of it.

Despite the fact that bulls were able to take the pair over the 20-day moving average today, they were unable to keep the price above it. This demonstrates that bears are selling while the market is rallying. The 20-day exponential moving average is flat, and the relative strength index (RSI) is at the midway, indicating range-bound movement in the coming days.

In most cases, vertical rises are followed by waterfall losses as traders flee the market, and that is exactly what happened in Cardano (ADA) on September 7th.
Because the bulls were unable to keep the price above the psychological level of $3, they may have resorted to aggressive profit-taking on their part.

As the fall broke below the 20-day exponential moving average ($2.62), it may have triggered a number of stop orders. As a result, the ADA/USDT pair might have fallen as low as the 50-day simple moving average ($2.03). The extended tail on the day’s candlestick indicates that buyers were aggressive at lower levels.

If the bulls are unable to push and maintain the price above the 20-day exponential moving average, the bears are likely to launch another effort to drive the price below the 50-day simple moving average. If they manage to pull it off, it will signal a shift in the market’s tendency, which will likely result in rallies being sold into.

Alternatively, if buyers are successful in defending the 50-day simple moving average, the pair may enter a period of consolidation for the next several days.

On September 7, Binance Coin (BNB) began to decline from the overhead resistance level of $518.90 and broke below the moving averages. On a closing basis, bulls were able to hold the 50-day simple moving average ($399); however, the inability to push and sustain the price above $433 may result in further selling pressure.

The 20-day exponential moving average ($458) has begun to decline, and the relative strength index (RSI) has entered the negative region, indicating that bears have gained the upper hand. They will almost certainly sell on relief rallies to the 20-day moving average.

If the price continues to decline and falls below the 50-day simple moving average, the BNB/USDT pair might drop to the next support level around $340. For a few days, a move in this direction might keep the pair range-bound between $340 and $433.

On September 6, XRP surged and closed over the overhead resistance level of $1.35, but the rally turned out to be a bull trap. The bears sold quickly, bringing the price down to the 50-day simple moving average ($0.98).

Bulls are attempting to defend the 50-day simple moving average (SMA) as evidenced by the lengthy tail on September 7 and today’s candlesticks. If the price remains above $1.05 for an extended period of time, investors will attempt to push the XRP/USDT pair over the 20-day moving average ($1.18).

If they are successful in doing so, the pair may be able to consolidate between $1.05 and $1.35 for a few days. On the contrary, if bears are able to keep the price below $1.05 for an extended period of time, the likelihood of a break below the 50-day simple moving average increases.

SOL rose to a new all-time high of $198 on September 8, but higher levels drew profit-booking from investors. However, the lengthy tail on the day’s candlestick indicates that there was significant purchasing near the 50% Fibonacci retracement level at $130.84, which was hit by the bears on Friday.

Following a significant recovery on September 7, the SOL/USDT pair is experiencing renewed selling today. If bears are able to keep the price below the 38.2 percent Fibonacci retracement level at $146.10, the pair is likely to tumble below the 20-day exponential moving average ($117) or lower.

After bouncing off this level, the pair may remain range-bound for a few days before resuming its heading upwards toward the next resistance level.

Alternatively, if the price rises from its current level or rebounds from $146.10, the bulls will attempt to push the pair closer to $195.48 once more.
A breakout and closing above this level may herald the beginning of the next leg of the uptrend in the market.

When Dogecoin (DOGE) broke out of the falling wedge formation, the cryptocurrency struggled to gain momentum. On September 7, the price fell below both moving averages, indicating that traders were selling in large quantities.

DOGE/USDT fell below the $0.21 support level, when buyers moved in to buy the pair. As evidenced by the extended tail on the day’s candlestick, this marked the beginning of a rebound. RSI has entered negative territory, and the 20-day exponential moving average has begun to trend downward, indicating that bears have gained the upper hand.

If bulls are unable to drive the price above the 20-day exponential moving average ($0.28), the pair may experience another round of selling. A break below $0.21 might put the key support level at $0.15 in jeopardy. The bulls will need to push the price over $0.32 in order to signify a resurgence of interest.

On September 7, the Polkadot (DOT) broke below the rising wedge pattern. As a result of aggressive selling, the price fell below the breakthrough level of $28.60, eventually reaching the 50-day simple moving average ($22.77).

As evidenced by the extended tail on the day’s candlestick, the DOT/USDT pair had a significant rebound from the 50-day simple moving average. The bulls are currently seeking to push the price over the overhead resistance level of $28.60 cents a share. If the price remains above this level for an extended period of time, buyers will attempt to restart the uptrend.

When prices fall from their current levels, it indicates that the market attitude has shifted to a negative direction and that traders are exiting their long positions in anticipation of more price increases. The bears will then attempt to push the stock below the 50-day simple moving average (SMA). If that occurs, it will signal that the break over $28.60 was a ruse to deceive investors.

Related: Sell or hodl? How to prepare for the end of the bull run

On September 7, Uniswap’s (UNI) range-bound activity between $25 and $31.41 finally resolved to the downside. Today, the bulls attempted to launch a comeback and push the price back above $25, but were unable.

The 20-day exponential moving average ($27) has turned down, and the relative strength index (RSI) has dipped below 38, indicating that bears have gained the upper hand. On September 7, they struck an intraday low of $21 and are seeking to bring the price below that level.

If they are successful, the UNI/USDT pair might drop to $18.69, which is the pattern goal. It’s possible that the price will bounce back off this level and that the pair will trade between $18.69 and $23.45 for the next several days. Bulls will need to push the price above $25 and keep it there in order to signify a resurgence.

On September 7, the price of Bitcoin Cash (BCH) declined from the above resistance zone of $806.90 to $864.30. This shows that bears are protecting the overhead zone with a lot of aggression. For the time being, the altcoin is likely to remain trapped in the huge range between $383.50 and $864.30 for a few more days.

The 20-day exponential moving average ($673) is flattening, and the relative strength index (RSI) is at the midway, indicating a balance between supply and demand. If the price recovers from its recent low of $596, the bulls will attempt to push the price over the overhead zone once more.

If the price of bitcoin falls from the zone, the BCH/USDT pair may settle between $596 and $684.30 for a few days before resuming its upward trend.
A breakout and close above the overhead zone will signal the potential start of a fresh uptrend, but a break below $596 will open the door for a further slide to $500 in the short term.