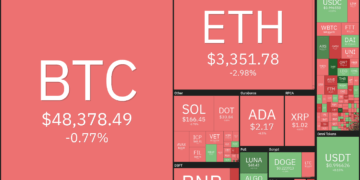 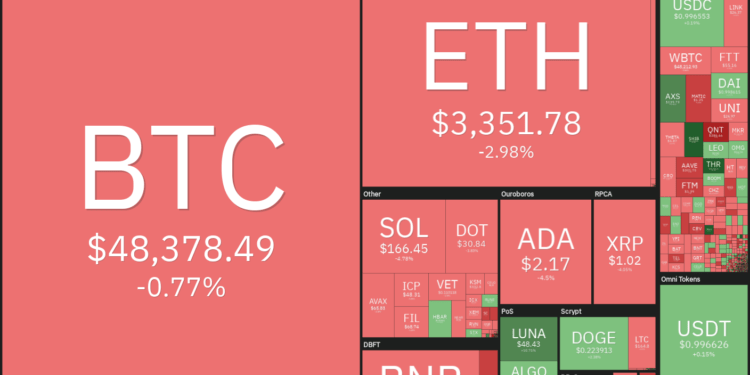 Bitcoin (BTC) is currently facing rejection near $50,000, signaling that bears are not about to surrender easily. Numerous analysts anticipate Bitcoin to skyrocket in the last quarter of the year, and PlanB, the author of the stock-to-flow model, thinks the “worst-case scenario” for Bitcoin in October is $63,000, rising to $98,000 by November.

PlanB is not alone in projecting a positive future. Using the relative strength index (RSI) of Bitcoin over the last four years, Twitter user TechDev predicts that the second leg of the 2021 bull run may be just getting started. Bitcoin’s cycle peak, the trader predicts, will be around $200,000.

While historical estimates suggest that the stock market would gain in the fourth quarter, the increase may not be linear. According to CFRA Chief Investment Strategist Sam Stovall, the volatility of the United States equities market in October was 36 percent higher than the volatility of the market during the previous 11 months on average. Bitcoin’s high correlation with the S&P 500 suggests that traders may be in for a roller coaster ride in the month of October.

Is it possible that Bitcoin will follow in the footsteps of its historical precedent and rally to the upside? And will cryptocurrencies be invited to the celebration? Check at the top 10 cryptocurrencies’ charts to see what we can learn from them.

The bulls successfully pushed Bitcoin above the overhead resistance level of $48,843.20 on Oct. 3, but the lengthy wick on the day’s candlestick suggests that the bears are defending the level with vigor and determination. For the past two days, the price has been fluctuating between the 50-day simple moving average (SMA) ($46,667) and $48,843.20, which is the 200-day SMA.

BTC/USDT may gain momentum if bulls are able to force and maintain price above the overhead resistance level, which may take the pair up to $50,000, and then up to $52,920.

In contrast to this premise, if bears manage to push the price below the 50-day simple moving average, the pair may drop to the 20-day exponential moving average. After bouncing off of this support, the bulls will make one more try to pass the overhead barrier, which will be seen as a favorable indication.

If the price breaks and maintains a level below the 20-day exponential moving average, the bears will gain an advantage. The pair could then fall to the 100-day simple moving average ($41,935).

On Oct. 1, the bulls successfully pushed Ether (ETH) above the downtrend line and the moving averages, but the bears have not given up the fight yet.
Sell-side agents are trying to arrest the upward movement near $3,500 and bring the price back below the 50-day simple moving average ($3,297).

If they are successful in doing so, the ETH/USDT pair might drop to the 20-day moving average ($3,194). This is a crucial support level for the bulls to hold on to because a break below it could lead to increased selling by the bears. Afterwards, the pair may decline to the psychological threshold of $3,000, and afterwards to the 100-day simple moving average ($2,841).

The bulls may also attempt to push the price above $3,500 again if the price bounces off the moving averages again. If the price remains above this level of resistance, the pair might increase to $3,676.28 and subsequently to $4,000, depending on the circumstances.

Binance Coin (BNB) has been encountering significant resistance at the overhead resistance level of $433, but the bulls have not given up much ground, which is a healthy development. Essentially, this shows that purchasers are hanging onto their holdings in anticipation of a price increase.
The 20-day exponential moving average ($395) has gone up, and the relative strength index (RSI) is in the positive region, indicating a minor edge for the bulls. If buyers are able to drive and maintain the price over $433, the BNB/USDT pair has the potential to gain momentum and climb as high as $518.90.
Alternatively, if the price declines from its current level, the pair may drop to the 20-day moving average (EMA). If the price rises over this level, the bulls will attempt to push the pair above $433 once more, if possible. A break and closing below the 20-day exponential moving average (EMA) might keep the pair range-bound for a couple of days.

On October 1, the Polkadot (DOT) broke above the moving averages and the downtrend line, which was the first hint that bears may be losing their hold on the market. However, the extended wick on the day’s candlestick indicates that selling is taking place at higher levels. On Oct. 2, the bulls attempted to push the price above the right shoulder of the head and shoulders pattern.
On October 3, the DOT/USDT pair created a Doji candlestick pattern, indicating that both bulls and bears were unsure of their positions. On October 4, this issue was resolved to the downside, and the bears are attempting to drive the stock below the moving averages to recoup their losses.
They will have succeeded if they do so, which indicates that sentiment remains negative and that traders are selling on rallies. The pair might then take on the H&S pattern’s neckline in a competitive manner.
As a result, if prices retrace away from their moving averages, the bulls will attempt to push prices above the right shoulder of the channel and retest the important resistance level of $38,77.

While Dogecoin (DOGE) has rebounded to the 20-day exponential moving average ($0.22) since the beginning of October, bulls have been unable to keep the price above this resistance in recent days. This demonstrates that market sentiment is bearish, and bears are selling on rallies as a result.

Bulls are buying near the $0.21 support level, while bears are selling near the 100-day simple moving average ($0.24), according to the long-legged Doji candlestick pattern formed on October 4. If this uncertainty resolves to the downside, the DOGE/USDT pair might fall to $0.19, and then to $0.15, before resuming its upward trajectory.
On the other hand, if bulls are able to force and maintain the price above the 100-day simple moving average, the pair might rally to the downtrend line, which could operate as a strong resistance once more. The first indication that the correction may be nearing its conclusion will be a break and closing above this level.

The extended wick on the Oct. 3 candlestick indicates that bears attempted to defend the $45.01 level, but were unable to hold the lower levels for long. On October 4, aggressive buying by the bulls propelled the Terra protocol’s LUNA token to a new all-time high, setting a new record.
If bulls are able to keep the price above $45.01, this will signal the beginning of a fresh upswing. The rising moving averages and the relative strength index (RSI) in the positive zone signal that bulls are in command. The LUNA/USDT pair might initially increase to $50, and if this psychological barrier is overcome, the pair could then rise to $65, which would be the next stop.
In contrast, if the price is unable to maintain its current level above $45.01, the bears will attempt to drive the price down to the 20-day moving average ($37.45). A solid bounce off of this support level will indicate that the positive feeling has not been eroded. To gain the upper hand, the bears will have to bring the price below the 50-day simple moving average ($33.56) and keep it there.

However, the length of the day’s candlestick implies that bears sold at higher levels. The UNI/USDT Uniswap (UNI) surged over the 50-day simple moving average ($25.46) on Oct. 2. On Oct. 3, the altcoin produced an inside-day candlestick pattern, indicating that bulls and bears were split on whether to buy or sell.
The ambiguity resolved to the downside, and bears drove the price down to the 20-day exponential moving average ($24.02) on Oct. 4. However, an encouraging indicator is that bulls pounced on the dip forcefully, as evidenced by the long tail on the day’s closing candlestick.
If the price remains above $25 for an extended period of time, the bulls will attempt to push the UNI/USDT pair above $27.62. If the pair manages to break through this level, it could retest the crucial resistance level of $31.41.
However, if the price falls below the moving averages, the pair might go as low as $22 per dollar. This is a critical support level for the bulls to hold on to because if it is breached, the drop might extend to as low as $18.