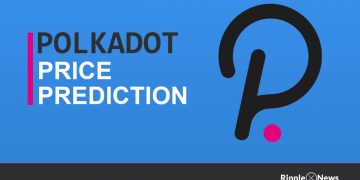 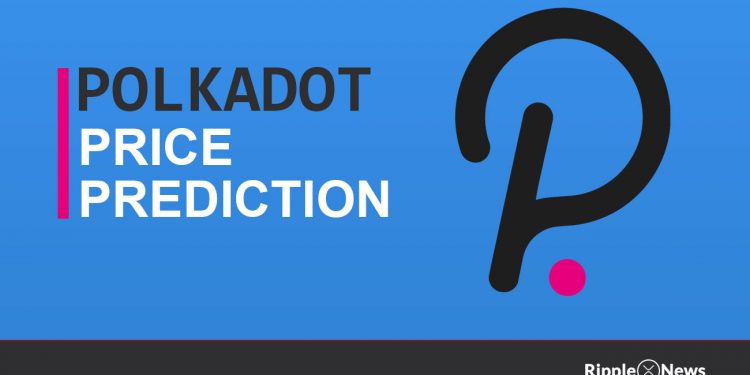 Polkadot is one of the big refreshments for the crypto community for the year 2021. We here are going to give you the 5 years detailed Polkadot (DOT) price prediction. The project has quickly gained much attention that investors and traders are stunned and curious to address the question “Is Polkadot (DOT) a good investment?” But before making an assumption about the prediction and answering the questions, we need to know what Polkadot is and is at all about. How it is helping the developer to build their Blockchains. Let’s get started.

Polkadot Network and its Origin

The Polkadot network was developed back in 2016. Polkadot is a Web3 foundation’s flagship project, a Swiss organization to make the decentralized web functional and user-friendly. However, when the mainnet was introduced, the Polkadot coin boomed. In a few weeks, DOT saw market capitalization leap in the top 10 cryptocurrencies. Polkadot worked to build a scalable Blockchain that can grow with a matter of time and with the increasing demand for it.

The main objective of the project is to build a forum that enables numerous Blockchains to engage with each other. Different Blockchains with specific features will operate based on a standard security system and lay the basis for the next generation of the Internet. The project’s vision is to build a complete decentralized 3.0 Internet.

DOT token is a Polkadot Blockchain’s native cryptocurrency. Polkadot has a dynamic governing structure of voting rights for all DOT holders. The DOT owners or the board can make proposals. In all cases, a vote based on the result could be held to find a consensus on the plan. To make the proposal work, it must be agreed upon by all stakeholders in the voting stake.

The native DOT token is not an ERC-20 token because it is based on Polkadot Blockchain which benefits the Blockchain network. The token has three main purposed Bonding, Staking, and Governance. The holders have complete control over the ecosystem of Polkadot. They can be rewarded for good behavior. This triggers all the holders to participate in transactions that only fulfill the basic consensus requirements.

In October 2017 the Polkadot Foundation organized a profitable ICO, raised about 140 million dollars, and sold about half of its stock of 10,000,000 DOT. But the company was sadly driven by losses that required it to carry out two sales rounds, one in 2019 and the other by 2020. During the days of the ICO, a single DOT was valued at almost $30, but the DOT holdings were revived in August 2020. That is, $100 new coins for $6 each were offered to users who purchased a $30 coin. Therefore, the average price for a single coin is $600. 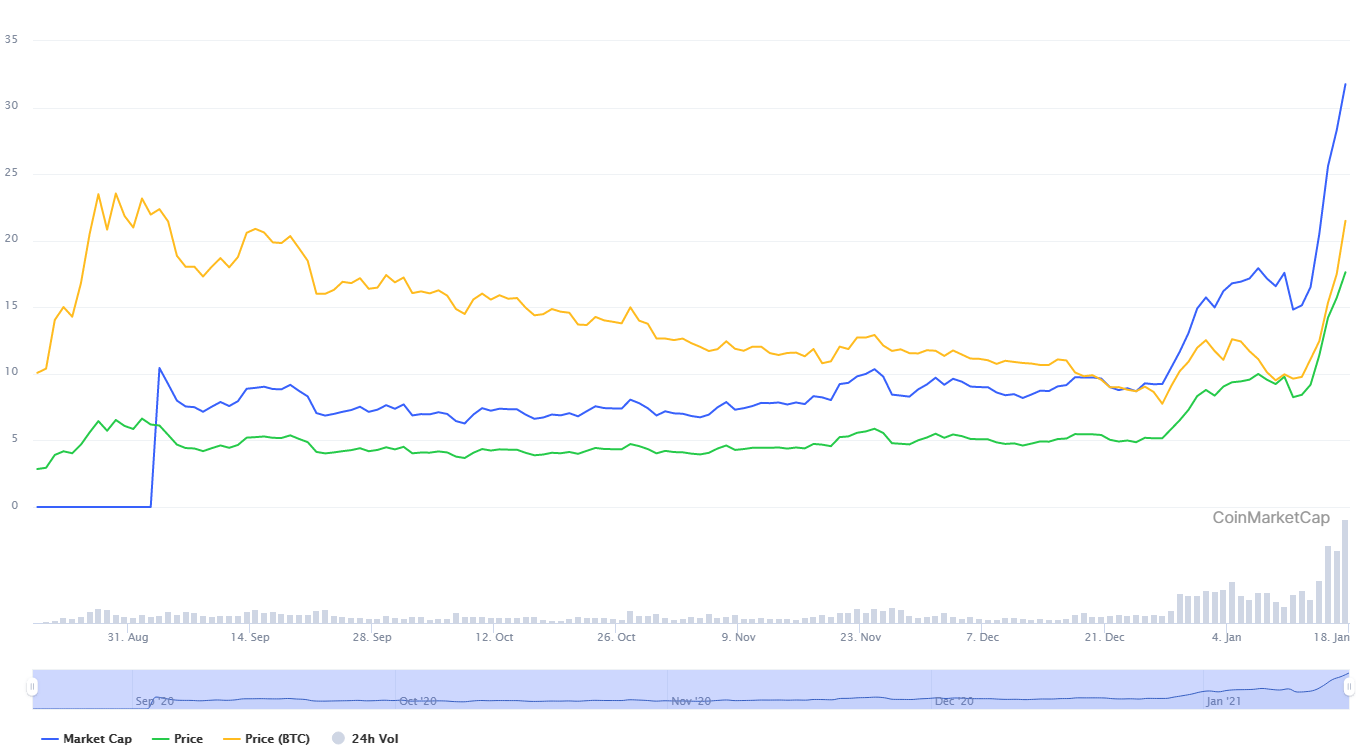 Thanks to the Dot-token journey, the token started with the price of six dollars, but a sudden fall later led to a token of 2.81 dollars. The new redonimation provided several tokens that contributed to a sudden market capitalization rise from zero to over $5 billion in a day. Therefore, in a very short timeline, it reached the top 10 crypto-currency ranking. This all pushed the prices of DOT to the current price of $17.58.

The native DOT token has well performed since its launch. Although the coin faced an all-time low of about $2.70 but shortly after that period, it emerged to be a potential investment with steady growth. Currently trading at around $17.58, it is estimated that the coin will be traded at the value of $23.68 by the year-end of 2021. The potential of the token is undisputable and many analysts and traders can see the future potential in long-run investments. 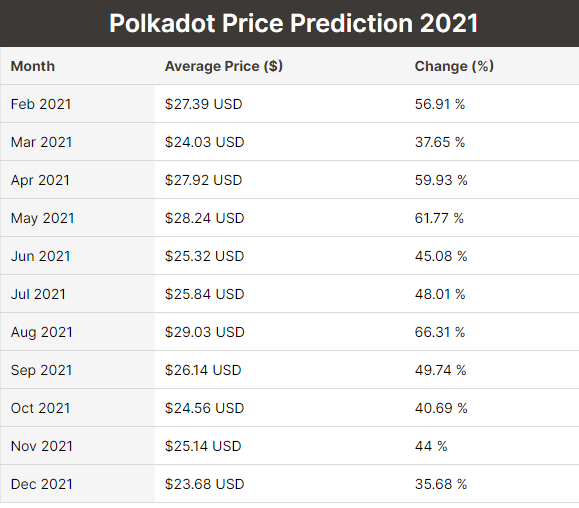 The crypto market is driven by volatility. Nowadays it is hard to predict the prices and to stay up to date with the latest prices. In this regard, TradingBeasts comes into force. The platform provides accurate price predictions of Polkadot for the coming 5 years. All the predictions are carried out using a combination of linear regressions. According to the platform, the price for the year 2022 is forecasted to be $30.631. For the year ahead the prices are expected to grow. In December 2023, the minimum expected price is $30.550 and the maximum is $44.926. The expected prices are depended on the volatility of the market. In January 2024 the DOT price is expected to be on average $36.462.

According to the analysts of wallet investors, the DOT price is slowly rising and has a less fast fall. However, the business behavior, since it appears to operate at its rate, cannot be entirely decided.

The prediction of CoinArbitrageBot provides the green light for investing and predicts a long-run price boost. The Polkadot 2022 forecast has a $24.0650, which in the next few years is expected to increase further. For the year 2023, the price is predicted at $38.9372. CoinArbitrageBot is a little more positive than the first couple of analyst views in this list and already in 2024 has a price of over $63.004. CoinArbitrageBot is also overall still optimistic in the long run. 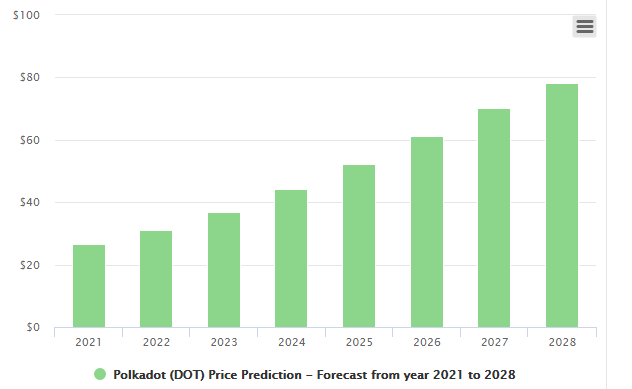 How Polkadot is Helping the Crypto Community

The Polkadot Web3 Foundation has created a fully integrated Blockchain to provide developers with an infrastructural base quickly and efficiently. The web foundation provides a substrate. Substrate helps you to create your Blockchain as quickly as possible with the support of one of the most common languages like rust and C++. All projects made with development on the substrate are automatically considered to be compatible with Polkadot Blockchain.

The features of Polkadot are not just for developers. Investors may also use Staking, in the long run, to take advantage of an essential feature. The number of DOTs circulating per year rises by 10%.  Stakeholders will be nominating and validating throughout the Polkadot Network at various stages. Before performing any tasks, stakers need to hold a certain amount of DOTs to perform tasks specified by Blockchain.

How to buy Polkadot

You need to already have bitcoin (BTC) or ether (ETH) traded in to buy Polkadot (DOT) on most cryptocurrency exchanges. The good news is that your credit card or bank account can be conveniently used to buy any cryptocurrency at Coinbase. There are other sites where BTC and ETH can be purchased online, but Coinbase is better used by new investors in the crypto industry.

Make an account online on any of the exchanges. Setup your payment method and verify your identity. After this, you are good to go. Just trade your BTC or ETH with Polkadot.

Where to store DOT

The most amazing thing about Polkadot is that you don’t have to download any wallet or have to purchase any hardware wallet. Polkadot has a mobile wallet that you can access from polkadot.js.org. Most of the newcomers don’t know this thing and a waste bunch of money on expensive wallets. or you can read our detailed guide on Best Polkadot Wallets in 2021

You just have to create an account in DOT and you can easily move your coins from the exchange into your account. It’s that easy. Make sure that you remember your password and your backup seed. If you forget both of those passwords there is nothing you can do to recover your coins.

Is Polkadot better than Ethereum?

The design goals are one of the main differences in both Blockchains. Ethereum strives to be a forum for distributed finance and the integration of smart contracts, while Polkadot has the ambition to help people create whole Blockchains and to merge these Blockchains.

Is Polkadot (DOT) a good investment?

Polkadot is a secure investment than some popular recently released coins which are still creating crypto waves on the market. The potential and value of the projects show that it could hit off the bridges.

Almost all the predictions made till now are specifying that the coin has the potential to grow in the coming years. After concluding major predictions, it is safer to say that by 2025 the coin will reach the price of $40. The path to reach the $40 mark seems rough but it is possible.

Although we spoke about everything related to Polkadot, how it is originated, and how it works. Its potential and importance mean that any investment made in it will be worth it. Is Polkadot an outstanding investment? Oh, since it has fallen into the world’s top 10 crypto ventures, we would tell it’s quite a valuable addition to your portfolio.

These predictions cannot be seen as the primary basis for a buying decision, as always. The opinions of the experts are generally focused on technical analyses and also consider external factors. It is also useful to gather your own opinions and use the predictions to generate your viewpoint only.

Anything topic left untouched and want to add more to this blog. Comment below and will respond as soon as we can.