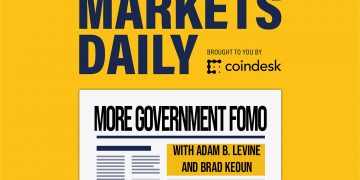 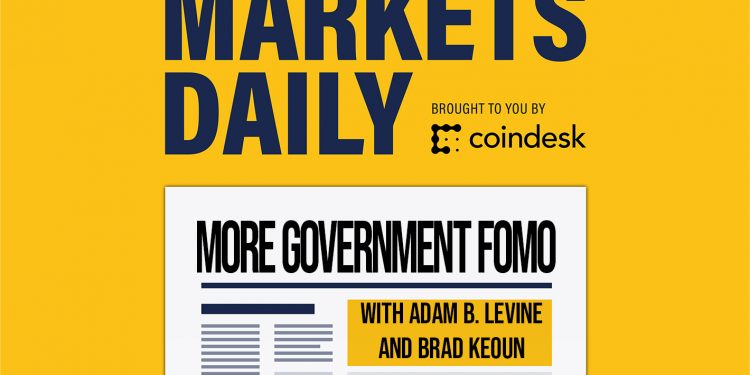 With bitcoin setting a blistering pace for 2020, Markets Daily is back with the news moving markets, plus a look at several stories on the escalating, global interest in blockchain by governments.

Tune in as CoinDesk podcasts editor Adam B. Levine and senior markets reporter Brad Keoun run down recent action, track interesting longer-term trends and highlight some of the most important crypto industry developments of the day.

Adam B. Levine: It’s JANUARY 7, 2020, and you’re listening to Markets Daily, I’m Adam B. Levine, editor of Podcasts here At Coindesk, along with our senior markets reporter, Brad Keoun, to give you a concise daily briefing on crypto markets and some of the most important news developments in the sector over the past 24 hours.

Brad Keoun:
Bitcoin up for the fifth straight day, with the price increasing to $7864, the highest in six weeks, in a pretty dramatic start to 2020

CoinDesk’s Omkar Godbole writes that the rally appears to be running out of steam for now, hitting resistance at the 100-day moving average of $7945

Technical indicators, though, currently suggesting that prices are more likely to go higher than lower

Adam: Turning to the news, the International Monetary Fund’s Chief Economist predicts that digital currencies are not about to challenge the U.S. dollar’s pivotal role in global trade

In an op-ed for the  Financial Times on Tuesday, Gita Gopinath wrote that although cryptocurrencies present “intriguing possibilities,” they lack the infrastructure and global acceptance needed to supplant the dollar as the preeminent global reserve currency.

“The dollar’s status is bolstered by the institutions, rule of law, and credible investor protection that the U.S. is seen as providing.”

Brad: the messaging-app company Telegram says in a new web post that it won’t integrate a crypto wallet into its system until it gets the green light to do so from U.S. regulators, in a reversal from the company’s stated plan as recently as October

The announcement is notable partly because it signals a more contrite or at least compliant stance as the company fights a court battle with the Securities and Exchange Commission related to its $1.7 billion capital raise in 2018, which the U.S. regulator has characterized as an unauthorized securities offering

Notably, Telegram emphasizes in the post that its proposed Gram tokens are NOT investment products; the company capitalized the word NOT

Telegram’s CEO, Pavel Durov, is reportedly set to be deposed in the case today in Dubai

Adam: And in China, the search engine company Baidu on Monday launched a blockchain-based service for developers to build decentralized applications, known as dapps

The new service aims to make it cheaper for customers to develop applications, since they won’t have to build their own blockchain platforms

Brad: And IBM, the computer maker, is launching a new app that uses blockchain to allow consumers interested in sustainability to trace the coffee they buy along the supply chain

Consumers scan QR codes on the side of the coffee jar to look at the origins of their purchase, linking back to information stored on the blockchain, and they can even choose to make additional payments to the farmers who grew the beans

Instead of tipping the barista, Adam, it’s like an extra little something for the person who cultivated your beans.

Adam: Turning to today’s featured story, this morning we’re tracking several threads from around the world which seem to indicate a growing drumbeat of national interest in blockchains, including some places you might not expect.

First, we turn to the Southwestern coast of India, in the state of Kerala (KERR-uh-luh), where the Economic Times of India reports on comments from the State Electronics and IT Secretary:

“We are looking for intelligent use of blockchain in specific domains in the next five years so that its applications can be sustained. Companies that produce solutions based on the technology can sell it as products or services,” The secretary, told the Economic Times. He foresees the state as a talent hub for blockchain experts through the government initiative of Kerala Blockchain Academy, which was started in 2017. The idea is to train 20,000 people in blockchain development over the next two years. “Around 2,000 of them have gone for the next level in the blockchain developer programme and 800 have graduated,” he said.

“The state’s strength in blockchain will be an incentive to attract the right companies that will trigger the ecosystem.” The state government is also trying to implement pilot schemes like using blockchain in land records, managing workforce, organic food traceability and immunisation programmes.

Meanwhile, in South Korea, CoinDesk’s Daniel Palmer recently reported on a proposed embrace of blockchain, at least so it can be locally regulated, by the Presidential Committee on the Fourth Industrial Revolution.

Financial institutions should be allowed to offer cryptocurrency products such as derivatives, according to a government advisory body in South Korea.

To support such a move, the nation’s fintech sector should develop custody solutions for cryptocurrency to avoid a reliance on foreign custodians, said the Committee

The committee said the government could follow the lead of U.S. regulators and sanction products such as futures contracts tied to bitcoin. Institutions would also be allowed to offer other cryptocurrency services such as trading.

With cryptocurrency trading surging worldwide, “it is no longer possible to stop crypto-asset trade,” said the Committee, according to a report from Business Korea on Monday.

Other suggestions from the PCFIR included, notably, that bitcoin might be directly listed on Korea Exchange, the nation’s stock market.

Finally, we return to US shores where the Virginia state legislature is tomorrow set to offer House Joint Resolution 23

Quoting from the Virginia Legislature’s website, this resolution “Requests the Department of Elections to conduct a study to (i) determine the kinds of blockchain technology that could be used to secure voter records and election results, (ii) determine the costs and benefits of using such technology as compared to traditional registration and election security measures, and (iii) make recommendations on whether and how to implement blockchain technology in practices affecting the security of voter records and election results, end quote

If passed by the legislative body, we’d expect to see the first report By November 30th, 2020, and potentially a second, more in-depth report a year after that.

Now, is voting on the blockchain a good idea?  Personally, I have some doubts. But it’s another example of the cycle of adoption repeating, and while those of us who have been paying attention since the beginning of crypto might want things to hurry up, this is in fact the natural way that people learn about new and unfamiliar technologies.

Adam: And now, for today’s spotlight, we’re looking at one cryptocurrency exchange’s costs of running a marketplace – in a fast-growing business that’s been known since its earliest days as a place where it’s not uncommon to see the movement of funds with dubious origins

It’s the 2019 Transparency Report, detailing the exchange’s efforts to comply, or in some cases not comply, with requests from law enforcement agencies for information related to allegedly suspicious activity

A couple of the takeaways here are, one, just how quickly the number of requests are increasing, perhaps an indication of how quickly the crypto markets and in particular Kraken’s business is growing

But also, this just highlights the very real costs of responding to and complying with all these requests from law enforcement agencies that might be following up on tips or other leads in their efforts to solve crimes or stop money-laundering

According to the report, there was a roughly 49% increase last year in global law enforcement requests from 2018 levels

62% of requests resulted in data provided

28% of requests were non-valid, meaning the request did not meet local legal requirements and/or the company’s internal law enforcement production policy

Geographic distribution – some 432 from the US, 86 from Great Britain, with most of the remainder coming from other European countries

Majority of US requests came from FBI, followed by the DEA and Homeland Security/Immigrations Customs Enforcement

CEO Jesse Powell tweeted that the cost to service the requests wa more than $1 million, “substantially beyond the work of one paralegal”

Powell said that Several things contribute to the cost, including that Kraken is an Older business with 8+ years of data, millions of accounts, and high security around accessibility of personal data,

Another issue is that requests are handled in high wage markets rather than exported/outsourced to low wage markets. It could probably be 1/10 the price if we eliminated all concern for security/privacy.

It’s important to note here that as this industry evolves, that some of these exchanges are choosing to publicly promote their efforts to comply with law enforcement, potentially calculating that the lion’s share of institutional investors who want to enter the crypto markets will want to deal with exchanges that aim to be squeaky clean and in full compliance with domestic and international authorities

Adam: Join us again on Wednesday,  for the next Markets Daily from Coindesk.  To make sure you never miss an episode, you can subscribe to Markets daily on Apple Podcasts, Spotify, Google Podcasts, and just about any other place you’d like to listen.  If you’re enjoying the show, we really appreciate you leaving a review. And if you have any thoughts or comments, email [email protected]