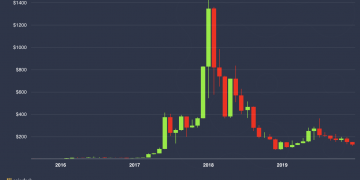 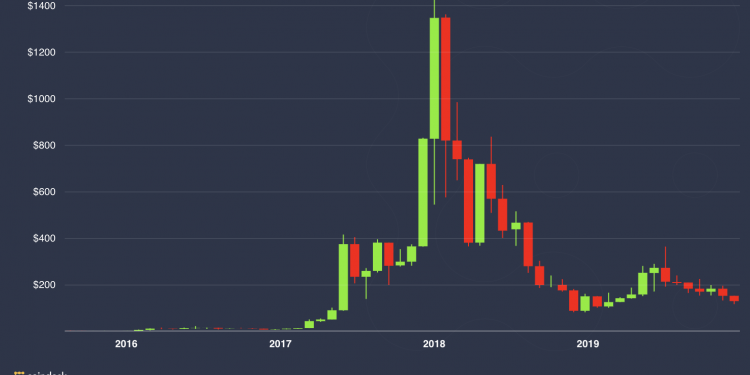 Ether is down significantly from record highs and the majority of its holders are losing money on their investments.

The second-largest cryptocurrency, which powers ethereum’s blockchain, is currently trading at $131, representing a 90 percent drop from the all-time high of $1,431 reached in early January 2018, according to CoinDesk’s ether price index.

An address is said to be out-of-the-money if the current price of ether is lower than the average price at which the coins were acquired or sent to an address.

So, the 31.31 million ether addresses have acquired coins at an average price higher than the ether’s current value of $131.

About 3.58 million addresses have purchased coins in the range of $745 to $1,340. Since it was launched, ether has so far traded above $747 only for six months, from the meteoric rally of October-December 2017 until its price slide in the first quarter of 2018.

The majority of the in-the-money addresses have acquired coins in the range of $0 to $130, while 4,120 addresses have an average cost of $0. These could be early buyers who bought ether in the period between August  2015 and December 2015, when the cryptocurrency was trading in cents.

While the number of addresses in-the-money is small, the volume of ether these addresses are holding is quite significant.

Only 8 percent of addresses are in-the-money, but hold 31.24 percent of the total ether held in all addresses. That amounts to 34.05 million ethers ($4.5 billion). These investors have already seen their massive profits evaporate in the last 23 months and may offload their holdings if prices find acceptance under $100, adding to bearish pressures around ether.

The number of addresses in-the-money may have been higher at the end of the second quarter of this year, when ether was trading near $360.

Indeed, ether is not the only cryptocurrency to have faced intense selling pressure in recent times. The broader market has taken a beating, courtesy of bitcoin’s drop from June highs above $13,800 to recent lows near $6,400.

However, bitcoin, the top cryptocurrency, is still up 103 percent on a year-to-date basis. Ether, on the other hand, is reporting a marginal year-to-date loss at press time.

“Ethereum has consistently missed deadlines for protocol upgrades,” said Connor Abendschein, research analyst at Digital Assets Data, to CoinDesk. “Ethereum 2.0 was supposed to have already gone into effect earlier this year, and it still hasn’t gone through.”

Ethereum 2.0 is a major network upgrade that will shift the blockchain’s current proof-of-work consensus algorithm to proof-of-stake and transfer validation function from miners to special network validators.

Under proof-of-work, miners compete with each other to solve a difficult puzzle (algorithm) to add each block to the chain. Under proof-of-stake, there is no competition as the block creator is selected based on the user’s stake in the project – in other words, ether holdings.

The market is expecting the first upgrade to be rolled out in January 2020. Ryan Selkis, CEO of Messari, however, thinks the transition won’t happen until 2022.

Apart from the missed deadlines, selling by an early HODLer likely pushed the cryptocurrency lower.

As noted by Alex Svanevik, data scientist in Crypto Land and co-founder of data science firm D 5, an address dating back to 2015 has moved more than 300,000 ethers to exchanges in the past four months.