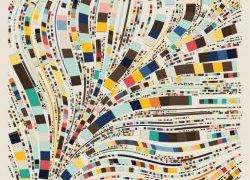 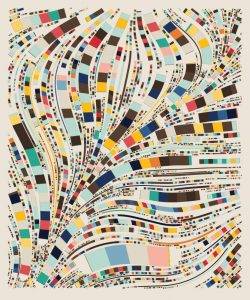 Tyler Hobbs used to be a computer scientist, but now he’s a generative artist. He writes code in a way that makes it look like art, which has sold for millions.

Tyler Hobbs, 34, came up with the idea for Fidenza. He left his job as a computer engineer to be an artist full time.
It happened when he found an art platform called Art Blocks. It lets people make NFTs with generative art, and he was chosen as an artist.

As a coder, he thought it was important to make art with the tools he knew. This made people wonder, “What is the difference between man and a machine?”

“They’re generally both interested in the artwork, and they’re willing to risk a fairly large amount of money on something that’s unproven — I think it takes a special breed of person to be that kind of collector.”

The process of a generative art drop on Art Blocks is unique because the art doesn’t exist until it is “minted” by the person who buys it.
Minting starts at a certain time, which Art Blocks says.
In order to mint, buyers pay a certain amount of ETH and pay the gas fees that are required. They get the artwork when it’s done, which can take as long as 30 seconds in the case of Fidenza.

The code that makes the art on the blockchain starts with the randomized transaction hash of the buyer’s transaction.
This string of data is then read by the code, which assigns the artwork different overlapping characteristics based on parameters set by the artist. The code then generates the artwork in real time.
It’s like a sperm fertilizing an egg: The minter’s unique, direct, and important contribution to the artistic equation is just as important as the egg itself.

A few of the “super dense” Fidenzas that max out the visual noise level. They can be overwhelming at first, but they have their own charm if you sit with them. pic.twitter.com/vRGOWWk1gi

This means that anyone can use the code for Fidenza to make other things that look like Fidenza.
It’s also limited to 999 copies, so “bootleg Fidenzas” wouldn’t be signed by the artist, like if someone copied an artist’s style with the same materials and tools that they used.

People should be able to play around with the algorithm and see how it looks, but Hobbs says that his vision for Fidenza is done now.
So far, I think the 999 has done a great job of testing the algorithm. It does everything I could have asked it to do. I like that there is “a clear start and a clear finish.”

“There’s a certain artistic challenge to creating an algorithm that will create something with a lot of beautiful variety within those 999, while still maintaining a consistent level of quality”

He isn’t worried about fakes because blockchain provenance can’t be faked. However, he admits that someone could sell them as fake Fidenzas.
While he doesn’t know for sure if it’s legal to do so, he thinks it’s disrespectful and unethical for others to use the program for profit.

Hobbs was interested in sports, a wide range of music, and “drawing comic books by hand” when he was a child in central Texas.
Dad talked him into studying computer science instead of going to art school because it was more “practical” for him to do so.
He earned his bachelor’s degree at the University of Texas at Austin.

His first job was with database company DataStax after he finished college in 2010. He worked on “an open source, high performance database,” which is what he worked on.
How would you describe Hobbs? He thought programming was “the best job I could have hoped for.” He worked at the company until 2017.

When Hobbs tried his hand at a lot of different types of art, he called his oil paintings and figure drawings “traditional art.”
They were long-standing art traditions, but they didn’t have a personal connection to the artist, a 21st-century computer scientist, who was the person who made the art.

The Bouldin Creek Mural was a precursor to Fidenza. Now I’m looking for the right fit to paint a colorful Fidenza-esque mural! pic.twitter.com/IIqg6BYABp

For great art, Hobbs says, it’s important for the art to be about the artist and their unique abilities. That’s where you have the most interesting things to say.
In fact, this can be seen all over the world, from stone-age hunters who drew pictures of their prey on the walls of their cave dwellings to artists like Da Vinci, who used his knowledge of human anatomy to draw figure drawings.

Then, when Hobbs was looking for a way to connect with his art on an emotional level, he came across the generative art genre: art that is made by letting an autonomous system “determine features of an artwork that would otherwise need to be made by the artist.”
As soon as he put programming in his heart, the gears began to work together.

“I started wondering if I could write a program that would create a painting.”

A few years later in 2014, Hobbs started using “tools that were not meant to make art at all,” but the results he came up with were “really interesting art-wise.”
They were “more interesting than the paintings I had been making,” which made him want to keep improving his methods.

By 2017, he had enough money and confidence to quit his job and work full time on art, making 100 pieces a year.
When he worked as an engineer, he made a lot more money than when he sold prints and did commissions.

In 2018, he started a business called Travel Boss with some of his old coworkers. He worked part time so that he could still make art, but he also had to deal with money and loneliness.
The pandemic forced the company to shut down early this year, so it did not work.

It was a good thing that he lost his job, because it was around this time in February 2021 that he found out about Artblocks.
Before this, though, he had been “kind of aware” of blockchain technology. He didn’t like working in the industry or buying coins.

“I was fairly sceptical of NFT’s in general, until I heard about Art Blocks. Art Blocks totally changed my opinion, because of how great of a fit it is for generative art specifically.”

If you’ve ever tried to make Generative Art, you’ve had a lot of trouble since it started in the 1960s. Hobbs says that Art Blocks were “a huge breakthrough.”
With a group of people willing to help make the generative art they bought, there was finally a product-market fit.

The curated stream is the most important, with artists chosen by the platform’s curation board after a long review process.
For example, Hobbs said, “I knew the art was good, and I had a good track record and a lot of friends.”

Hobbs says that the first money he made from minting changed his life because it “meant the security that I could work full time on art for several years, even if there were no secondary sales.”
Though he’s sold most of the ETH, he still has a lot of it, and he thinks it will go up in value.

Much of his time now is spent getting to know people who own million-dollar works of art.
Stacks of rolled Fidenza prints are behind him. He is in the process of mailing them out to people.
“I let the owners order prints, but it’s limited to one print,” he says. He adds that he charges only reasonable printing costs of up to $600, which isn’t much when the floor is worth about $800,000.

Twitter has been moving very fast for me (all of us?) these days. Thank you for your patience while I work to get back to everyone. Soon(ish) I’ll start posting regularly again ;). In the meantime, check out my most recent essay: https://t.co/ezz2r9IjuU

Though Hobbs will certainly be continuing his daily artistic practice, his next moves will be more intentional. He wants to change the way he works. Instead of releasing early sketches as he works, he wants to start with the finished product and only show partial works later.

“I’m 100% focused on putting out high-quality work,” he says. Even though he isn’t in a hurry, he wants to outdo himself again with his art.

“I know that that’s a high bar, but I do also feel that I can meet or exceed it in the future — at least in terms of how I view the quality of the work.”

How COPA lawsuit in opposition to Craig Wright could reward Bitcoin