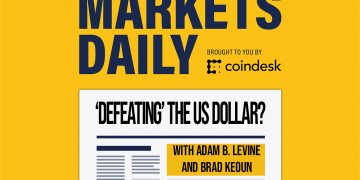 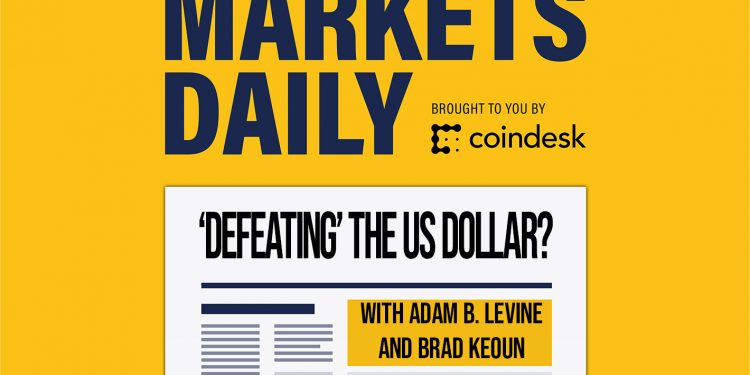 With bitcoin seemingly back to ‘normal’, Iran and Myanmar are talking about a sanction busting ‘Muslim’ cryptocurrency. We take a moment to look at historical adoption over time, and how it might apply to national cryptocurrencies.

No time to listen? Scroll down for the full transcript

Adam B. Levine:  On today’s episode, Back to Normal Bitcoin, Nation-State Crypto,  and Miner Hedging Strategies

Adam: It’s December 20, 2019, and you’re listening to Markets Daily, I’m Adam B. Levine, editor of Podcasts here At Coindesk, along with our senior markets reporter, Brad Keoun, to give you a concise daily briefing on crypto markets and some of the most important news developments in the sector over the past 24 hours.

Brad Keoun: Bitcoin appears to have settled back into the range where it’s traded for the past month, roughly in a range between $6500 and $7800.

This morning the price is down just a touch, on light volume, to about $7100, right in the middle of that range

As we head into the final weeks of the year, bitcoin is up 93 percent year-to-date, though traders are wondering if the price next year could rise back above that June high around $13,880

In the U.S., Forbes reports that Congressman Paul Gosar, an Arizona Republican, has introduced a draft bill called the Crypto-Currency Act of 2020 to clarify regulation of digital assets

The bill would create three categories of digital assets, cryptocurrencies, crypto-commodities and crypto-securities

Brad: And in industry news, the big crypto exchange Binance has invested an undisclosed amount of money in derivatives platform FTX as part of a strategic partnership between the two firms

According to the announcement, Binance has purchased equity in FTX, but it also purchased positions in FTX’s digital token

Separately, the venture funds Dragonfly Capital and Paradigm have acquired $27.5 million worth of MakerDAO’s MKR tokens and plan to take part in the network’s governance.

Announced Thursday, the investment will fund the Maker foundation’s efforts to promote adoption in China and the broader Asia region of MakerDAO’s dai token

Dai is a dollar-pegged stablecoin that’s become an increasingly watched part of the fast-emerging emerging landscape of decentralized finance, known as DeFi, essentially distributed networks that some industry participants hope could eventually supplant banks and other big financial companies

Adam: Bloomberg reports that the big U.S. hedge fund Fortress will renew its efforts to buy creditors claims from the defunct Mt. Gox cryptocurrency exchange, offering to pay up to 70 cents on the dollar on their account value

Based in Japan, Mt. Gox was once the world’s biggest Bitcoin exchange, until it closed in early 2014 after losing hundreds of thousands of bitcoins.

Thousands of Bitcoins have since been found, which have of course increased more than 10-fold over the past five years

Brad: And finally, Reggie Fowler, an Arizona businessman who was a minority owner of the National Football League’s Minnesota Vikings, plans to plead guilty to federal allegations that he ran a shadow banking service for cryptocurrency startups

According to an indictment earlier this year, Fowler and an associate opened bank accounts at various financial institutions to store funds on behalf of cryptocurrency exchanges but told the banks they would process real-estate transactions

A hearing has been scheduled for January in New York.

Iranian President Hassan Rouhani said the Muslim world needs its own cryptocurrency to fight American economic domination in international trade and cut reliance on the dollar.

“The Muslim world should be designing measures to save themselves from the domination of the United States dollar and the American financial regime,” he said at the Kuala Lumpur Summit in Malaysia on Thursday.

Iran has been hit with severe economic sanctions by the U.S. that limit how the nation’s financial institutions make investments abroad since the dollar is the most common currency in international transactions. The Iranian government has been working on expanding the use of cryptocurrencies such as bitcoin to circumvent the U.S. sanctions.

Adam: While there are no functional nation state or central bank digital currencies yet, if history is any guide this is a temporary thing.

When crypto technology got its start just a little more than 10 years ago it presented a new possibility, but also new risks.  The early users who gravitated to bitcoin were pretty much without exception outliers from society at large in some way. In the early days these were libertarians unhappy with the economic order of things and those who wanted to buy something they weren’t allowed to online.  For both of these types of users even a very very early bitcoin offered significant advantages, which is why they used it. And while those demographics have not grown as Bitcoin has over time, they did kickstart its demographic explosion by proving what was possible, and making the opportunity obvious to those with less incentives to try something new.

At the nation state level, we see a similar pattern emerging over the past few years, with the troubled Venezuelan government introducing the “Petro” as a way to bypass US sanctions, to reportedly limited deployment and certainly limited effect.  Iran falls into this same bucket. It’s been said that Bitcoin doesn’t ignore borders, it transcends them as if none exist. That’s an element that’s wildly valuable to any nation finding itself on the wrong end of a US dollar reserve currency denominated financial system as it provides a distributed alternative which can’t be stopped by banks, bombs or bullets.

Beyond the economic outcasts, this last year we’ve heard of less controversial if not more important efforts like the Marshall Islands national digital currency, or perhaps most interesting of all, China’s long teased move to a digital yuan.

These moves aren’t here yet, but they are tangible, they are important, and they are coming.  And if it was bitcoin’s early fringe users who led to the vibrant, global cryptocurrency ecosystem we see today, can you imagine, what’ll happen next?

Adam: And now, for today’s spotlight, we’re looking at a new derivatives market in the crypto industry – this one tailored not for bitcoin traders, but for bitcoin miners

Brad: For today’s spotlight, we’re looking at a growing practice in the cryptocurrency mining business: hedging

Earlier this week we brought you the news that Canaan, a big Chinese maker of computers for mining bitcoin and other cryptocurrencies, was seeing a big drop in its stock price, thanks partly to a sales slump in the industry but also due to price competition from the industry leader, Bitmain

That’s crucial because some of these so-called mining farms consume the same amount of power as a small town or city, with the computers, known as mining rigs, working to confirm transactions on the blockchain 24 hours a day, seven days a week

As the business becomes more institutional, the finances of these operations are become more sophisticated as well, with more of an eye on risk-management

To that end, it’s becoming increasingly common for mining firms to hedge their future output,

Reuters reported earlier this month that crypto miners are now using derivatives not just to hedge price risks, but to hedge against changes in bitcoin’s hashrate, or the total amount of processing power on the network

The hashrate, which is in some ways akin to the way oil traders analyze the weekly count of drilling rigs, can be quite volatile along with the price

These derivatives work sort of like business-protection insurance, helping mining firms to avoid losses if the hashrate suddenly changes for the worse

According to a press release on Thursday, the digital-asset trading firm GSR, which says its leadership team includes former executives from the Wall Street firm Goldman Sachs and Japanese bank Nomura, says it has partnered with Interhash, which is a strategic partner of Canaan’s, to provide a customized suite of derivatives for the mining industry

The suite will include swaps, collars and more bespoke structured products, according to the press release

The cost of mining equipment and electricity are constantly in flux, says Cristian Gil, GSR’s co-founder

The unpredictability of their business models is unprecedented, so it is natural that this segment of the market is exploring ways to better hedge their risk, he says

The companies estimate that some $3B USD of Bitcoin will be mined in 2020 alone, based on current prices.

But this market could grow along with the crypto industry, he says

The announcement serves as a reminder that, with bitcoin’s price volatility, quadrupling during the first half of this year and then tumbling by 50 percent, the mining business can be a dicey proposition, and it’s increasingly turning to Wall Street-style tools to manage the substantial risks

Adam: Join us again on Monday for the first of our short Holiday episodes, which we’ll be running through the 1st of the year, with full episodes resuming on January 2nd, 2020.

To make sure you never miss an episode, you can subscribe to Markets daily on Apple Podcasts, Spotify, Google Podcasts, and just about any other place you’d like to listen. If you’re enjoying the show, we really appreciate you leaving a review. And if you have any thoughts or comments, email [email protected]

New Ransomware Tactic: Pay Us or the World Sees Your Keys

New Ransomware Tactic: Pay Us or the World Sees Your Keys