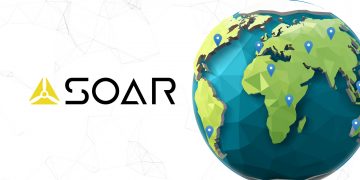 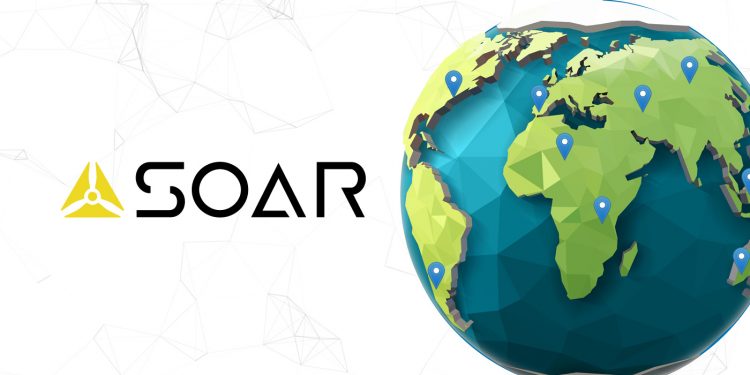 The Soar project is an attempt to create a global and decentralized map using drone technology. The project consists of two distinct stages. The first will be a blockchain system for uploading, securing, and distributing drone content from the platform’s users to potential content buyers. The second stage is more ambitious. By linking together the aggregated drone content, Soar hopes to publish a so-called “super-map” of the world with incredible amounts of detail gleaned from its drone pilot user base.

“Despite the rapid growth of the drone industry, there is an absence of a suitable marketplace for drone content or facility for licensed drone operators to fully optimize and monetize their content,” according to the project’s white paper. “Soar will directly address this lack of a market for content. Furthermore, there has not been direct access to mapping technology which would allow this content to effectively seed a super-map platform and take advantage of the extremely high-resolution content of which drones are capable.”

What’s the Potential Size of the Drone Content Market?

Soar estimates that commercial drone sales topped $1 billion in 2017, a trend that’s likely to continue for the foreseeable future.

“The expanding drone market is largely driven by the tremendous growth in commercial applications of drone content and footage in industries such as infrastructure, mining, agriculture, journalism and real estate with an addressable market estimated to reach $127 billion by 2020,” the white paper stated

That works out to an impressive compounded annual growth rate of between 15-25 percent over the next half-decade, Soar’s developers added.

How Does It Work?

Soar’s marketplace relies on the SkyMap token, or SKYM, for its base. The project aims to draw content from three main avenues – satellites, aerial photograph, and, most importantly drones.

The project will use satellite data for its super-map to cover distances from Earth at about 500 kilometers. Aerial photography will take care of the spectrum to at 5,000 meters, while drones will provide granular detail at 250 meters. The Soar marketplace, driven by the SKYM ERC-20 token, will not only allow buyers to find and buy extant drone data. It will also fuel a so-called SkyBount system, where buyers can request specific drone data to be completed on a freelance basis by drone operators. There will also be a longer-term SkySponsor arrangement system.

“Soar’s SkySponsor model allows for curation of the content as the SkySponsors will only support content that is likely to be used, thereby increasing the overall content quality uploaded to Soar,” the project’s team explained. “The driver for the SkySponsor model is extremely compelling as it effectively proves the economics for seeding the Soar super-map. The super-map will be both dynamic and temporal; over time it will evolve to only exhibit the ‘best of the best’ imagery.”

How Does Soar Stack Up Against Established Global Maps, like Google Maps?

Soar’s content team provides a detailed breakdown of the project’s eventual competition with – and superiority to – Google Maps.

Google Maps’ content is relatively static, whereas Soar aims to provide almost daily updates to its super-map. This gives Soar the advantage in providing real-time information on evolving situations, such as wildfires, floods, construction projects, and more.

Soar will have a level of granular detail that Google Maps is unable to achieve due to its distributed drone network, and that information will be held by the community instead of a monolithic corporation. Moreover, Soar will be built partially by its built-in marketplace, and Google Maps lacks a defined marketplace of any kind.

Finally, Soar’s use of blockchain technology means that its images will contain reams of metadata completely lacking in Google Maps’ model. This metadata is both searchable and verifiable due to its presence on the Soar blockchain, and it isn’t limited by server space or geographic location since it’s distributed throughout the entire Soar network.

Who’s the Team Behind Soar?

CEO and founder Amir Farhand leads the Soar team. Farhand worked with the Chinese government in 2008 to identify potential issues surrounding the 2008 Olympics in Beijing, particularly those issues related to air pollution and its knock-on effects. He has also collaborated with the U.S. military in map-making efforts and holds a doctorate in satellite image analysis and Earth remote sensing. His doctoral thesis centered around Chinese air quality issues resulting from sandstorms in the Mongolian steppe.

Soar’s presale date has not yet been announced. The token generation event took place in July. The SKYM token has a hard cap of 350 million, of which 130 million will be sold to raise approximately $19.5 million. About 30 percent of the presale funds will be shunted into marketing efforts, with 35 percent going to operations and 20 percent to research and development. The remainder is slated for legal and infrastructure concerns. As the presale has not yet taken place nor information on the sale been finalized, SKYM tokens are not yet listed on an exchange or available for sale.

What’s Next on the Roadmap?

The Soar team plans to conduct a global roadshow in October and November, culminating in a mobile app release in December. In 2019, the Soar team will add multilanguage support in January and aims to launch the stage 2 super-map by May.

The Soar project is ambitious. Anyone looking to take on Google Maps must be exceptionally ambitious. Yet, the Soar team’s depth and the well-thought-out roadmap presented in the white paper make it likely that the project will quickly rise in prominence. Should the team’s goals be fully realized, there are near limitless applications for accurate and ever-changing cartographic data. Soar’s data availability could provide a real-world equivalent to the streams of data currently available on the internet, potentially revolutionizing everything from agricultural and environmental projects to construction management to demographic tracking and more.

You can visit the team’s official project website here.

The $1 Trillion Wallet: BitGo's Bid to Bring Bitcoin to Wall Street and Beyond