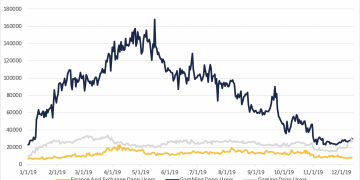 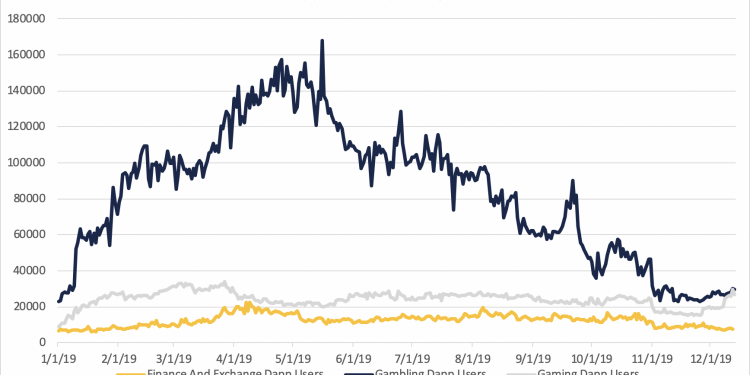 Despite the ongoing hype surrounding the growth and popularity of decentralized finance (DeFi) applications last year, gaming and gambling remain the most popular use cases for blockchain apps.

According to blockchain analytics site Dapp.com, there are approximately four times as many users for both gaming and gambling decentralized applications (dapps) than DeFi across seven different smart contract platforms as of Dec. 31.

The growth of DeFi applications was primarily concentrated this year on the ethereum blockchain.

According to Dapp.com, over 75 percent of DeFi applications are active on ethereum, while the second most popular smart contract platform for DeFi is EOS, with 11 percent of active DeFi apps.

Looking just at ethereum, the growth of DeFi over the year is more apparent. At several points throughout the year, DeFi apps beat out gaming and gambling apps in terms of number of users.

Beyond these three dapp categories, the number of users in the entire dapp ecosystem across 10 different smart contract platforms, including ethereum, has declined.

Data from blockchain analytics site DappRadar shows that the number of dapp users has shrunk 62 percent from a high of 110,000 in May to 41,000 at the beginning of December. Even the number of active dapps across these 10 blockchain platforms has decreased from 529 to 370.

In spite of the growth in popularity and discussion surrounding DeFi this year, the data suggests the dapp ecosystem is still struggling to gain traction.

According to DappRadar communications director Jon Jordan, the little activity that was generated this year by dapps was concentrated in a handful of projects.

“18 percent of the active dapps on ethereum accounted for 99 percent of [total dapp ecosystem] value. … A very small number of dapps accounts for the vast majority of dapp value on ethereum. In that context, the number of dapps running on a blockchain is irrelevant,” Jordan said in an email to CoinDesk.

Taking a step back, it would seem the year’s downward trend follows a longer decline in new dapp adoption seen since late 2018, according to blockchain analytics site State of the Dapps.

Even so, many in the crypto industry still believe in the potential for blockchain technology to serve as the infrastructure for a new internet.

Muneeb Ali, CEO of blockchain startup Blockstack, is confident that the “Web 3” use case for blockchain will one day attract hundreds of millions of new users.

“We started focusing last year on getting real applications on our platform. The next challenge? Getting, say, a million users on these applications. No one has that yet in crypto,” Ali said in an interview with CoinDesk in November.

According to Hoskinson, the industry simply needs more time to develop the appropriate technology for dapp development and execution.

“I look at the five to ten-year horizon,” Hoskinson said during an interview with CoinDesk in September.” No one has reached adoption or scale yet. It’s still very early days.”