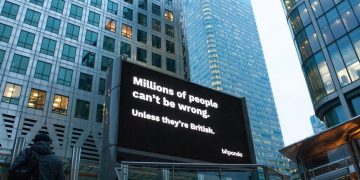 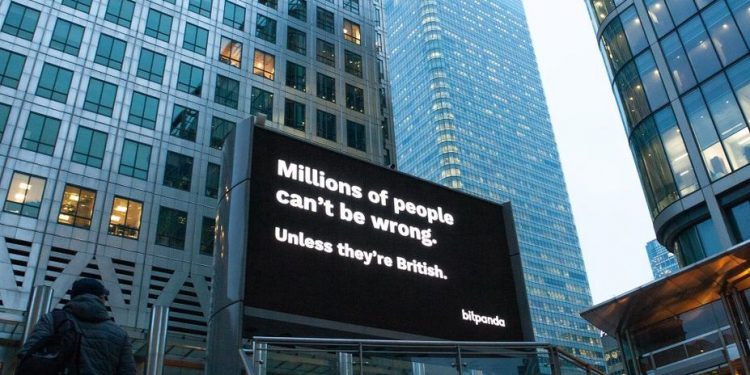 As the United Kingdom left the European Union this week, the Paris-based hardware provider Ledger and Vienna-based exchange Bitpanda made its thoughts known on the theme of “exit.”

Hanging in Canary Wharf, a financial district in London, on Friday was Ledger’s 7-by-4-meter digital billboard, reviving and modifying the controversial pro-Brexit slogan “take back control.”

Pascal Gauthier, Ledger’s CEO, said he was employing the phrase “to make a point about bitcoin.” There are similar values shared between the Brexit movement and crypto community, he said. But only crypto lets people “take back control for real,” as the advertisement read. The billboard was put up Friday for 24 hours.

“We find it amusing that the same sentence, taking back control, can mean two different things,” Gauthier said in a phone call. “It’s a great moment to frame one of bitcoin’s taglines as an effective way to take back control over your money, digital secrets, and private key.”

The billboard is meant to challenge the nativism behind Brexit’s success. “Brexit means taking back control over borders and currency. It’s very U.K.-centric. Bitcoin is the opposite. It’s a borderless, global technology,” Gauthier said.

“Millions of people can’t be wrong. Unless they’re British.”

The executive is waiting to see how Brexit’s trade deals will affect his company going forward. Ledger opened a U.K. operation last quarter and employs several people in London, though does not have “a physical office at this time.”

“Personally, I think Brexit is a mistake,” said Eric Demuth, the Vienna-based co-CEO and founder. “I feel like many people do not see the great impact and were misled by the personal short-term goals of some politicians. No self-promoting politician should be a reason for anyone to be stripped of their freedoms.”

Making light of this alleged political grift, Bitpanda shelled out for a multi-day advertising campaign reminding viewers that “millions of people can’t be wrong.”

The admonishment will hang at “The Screen” in Canary Wharf and three other London locations, on 38 installations throughout Glasgow, Scotland and throughout the Belgium capital of Brussels.

“We want to provoke people to think about the impact their vote has on their lives,” Demuth said.

Peter McCormack, a prominent crypto commenter based in England, called the sign “hypocritical” and said “real bitcoiners would probably support Brexit.” For his part, McCormack said he supports the divorce in theory, though he recognizes the alliance forged in 1973 has helped keep the peace in Europe.

“I don’t feel anything, it’s a total anticlimax. I don’t want to celebrate leaving,” McCormack said on a call.

Ivis Buric, a Bitpanda representative, said the company received a “copy denial from media owners in London,” who rejected the political nature of the advertisement. “Thankfully, there is still freedom of speech and advertising rules so we are live on location,” Buric said.

Bitpanda’s media campaign began Thursday night, and Buric said the company is happy with the response from the community. She also claimed there’s been a 12.68 percent bump in users from Europe.