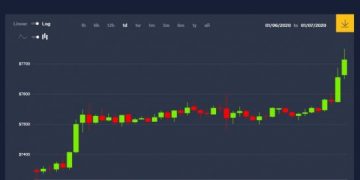 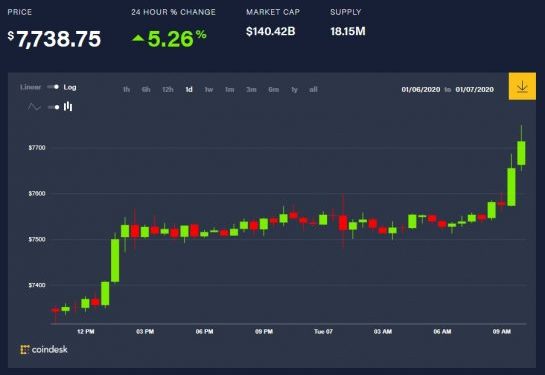 The world’s largest cryptocurrency by market capitalization climbed after the stablecoin tether (USDT) saw a major boost in market value.

Tether’s treasury website currently reads a value of $4,776,470,463.76 in total market cap, reflecting the sudden surge in its market value.

Traders can deposit U.S. dollars with Tether Ltd., the issuer of USDT, and receive the stablecoin in return. Since USDT is pegged 1:1 to the dollar and is used to move money quickly between crypto exchanges, a swelling of its market cap can be interpreted as an increase in demand for digital assets, although some critics have accused Tether in the past of printing tokens out of thin air to manipulate the market.

Talks surrounding BTC’s use case as a safe haven asset are dominating investor channels amid the backdrop of the Iran/US tensions that have been ongoing since Jan. 3.

At the time of writing the Dow Jones Industrial Average (DJI) is up 0.25 percent while the S&P 500 (SPX) is up 0.35 percent. Crude oil (USOIL) has taken a small hit and is down 0.35 percent so the narrative of BTC being a safe haven asset during times of uncertainty remains unclear at this stage.

Other major cryptos such as ether and XRP are up significantly by 5.76 and 11.18 percent respectively while the market capitalization of the entire crypto market has risen more than $10 billion.

A spokesperson for Tether did not immediately respond to a request for comment.

Gemini’s Head of Risk on How Crypto Beats Traditional Finance

Gemini's Head of Risk on How Crypto Beats Traditional Finance