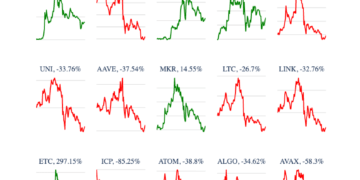 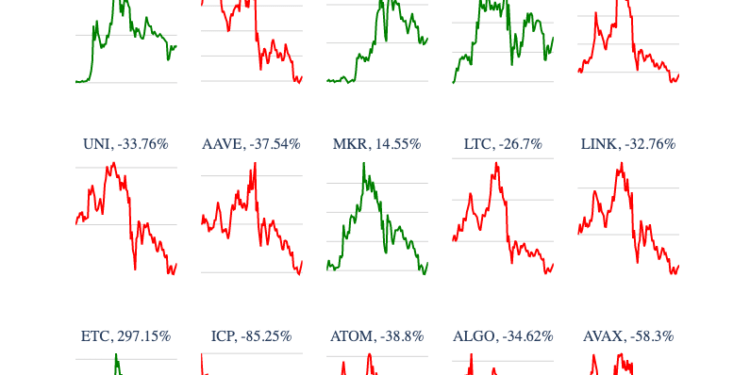 Traders predicted that Bitcoin would reach $100,000 and Ethereum would reach $5,000 by the beginning of 2021, as both assets’ prices appeared to reach new all-time highs on a daily basis.
Both assets are still down more than 40% from their all-time highs, and the bulls who predicted unbelievable price targets have vanished.

CoinMetrics discovered that despite the sharp market correction on May 19, many assets ended the quarter in positive territory, with Dogecoin (DOGE) leading the way with a 392 percent gain.

Ethereum Classic (ETC) and Polygon (MATIC) were the other two breakaway stars of Q2, with each gaining 297% and 227% respectively despite a nearly 39% decline in the price of Bitcoin.

The breakout in the Ether price from $1,971 on April 1 to a new record high of $4,362 on May 11 was a significant event in the second quarter, before market-wide selling resulted in a quarterly close of $2,240, representing a 13.2 percent increase in value.

According to CoinMetrics, the price of Ether has also benefited from a “resurgence in retail interest, fueled in part by the explosive growth of non-financial tokens.”

Due to the retail boom, the number of addresses containing at least 0.1 Ether increased by more than 50%, from 4.58 million to more than 5.20 million.

Comparing Ether’s positive performance to Bitcoin’s precipitous decline also demonstrates institutional investors’ increased interest in the top-ranked altcoin as a means of diversifying their portfolios away from Bitcoin.

As I previously stated, DOGE had by far the best quarter, finishing up 392 percent despite a 66 percent decline from its all-time high of $0.74 on May 8 of this year.

Bitcoin’s market share fell to 45 percent on June 30 as a result of altcoin gains, the lowest level since July 2018.

The Chinese government’s crackdown on cryptocurrency mining, which resulted in a 50% decline in hash rate in Q2 and the lowest level since late 2019, according to CoinMetrics, was one of the factors contributing to Bitcoin’s recent significant headwinds.

According to CoinMetrics, this is most likely a temporary dip, and the hash rate “should eventually recover once miners restart in their new locations.”

While the company acknowledged that this “will not happen overnight,” it cautioned that “it will take time to build and establish sufficient facilities to accommodate the sudden influx of new demand.”

CoinMetrics and other analysts believe that the development will have a long-term positive effect on the Bitcoin ecosystem and will continue to do so in the future.

“Over the long-term this mass migration should be largely beneficial as it will help Bitcoin hash rate get further distributed around the world, and remove the previous concentration in China. It could also help improve Bitcoin’s environmental impact since miners in some regions of China relied on coal.”