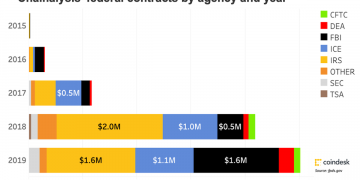 Inside Chainalysis’ Multimillion-Dollar Relationship With the US Government

Inside Chainalysis’ Multimillion-Dollar Relationship With the US Government 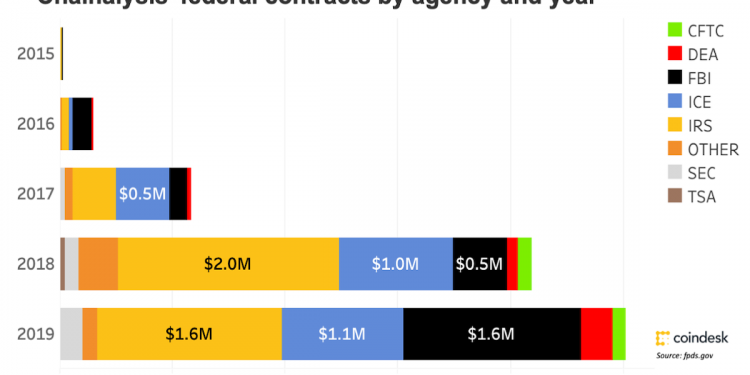 But just five years later, Chainalysis is now the cryptocurrency-tracing equivalent of Palantir, the data analytics company flush with lucrative government software contracts. Chainalysis is, right now, doing millions of dollars worth of business each year with the U.S. government, dwarfing its competitors in the young industry of blockchain surveillance.

The company is by far Uncle Sam’s leading crypto analysis contractor by spending and has become the go-to firm for 10 federal agencies, departments and bureaus.

In short, the feds want to catch up on, and make sense of, the tangled transactional web of bitcoin and other cryptocurrencies to stop all sorts of crimes – and they’ll spend big to do it.

Federal agencies have spent at least $10 million ($10,690,706 to be precise) in American tax dollars on Chainalysis’ tools, services and training since 2015, when Chainalysis was founded, according to 82 records of federal procurement contracts reviewed by CoinDesk. Counting contracts with possible extensions, the company stands to take in more than $14 million.

No competing firm’s federal contracts match Chainalysis’, and none are as prevalent across agencies. CipherTrace, led by CEO David Jevans, has made about $6 million through mostly research and development contracts; Elliptic, a British firm, has had only one contract worth $2,450 with the Internal Revenue Service, according to federal data.

Chainalysis’ contracts open a small but prescient window into the federal government’s nascent relationship with the cryptocurrencies some use to evade detection. Bitcoin is a pseudonymous system with inherent traceability – a network moving billions of dollars in value on a public ledger that anyone can track.

And though Chainalysis data show only 1.1 percent of bitcoin transactions were illicit in 2019, that proportion is growing: up 180 percent over the year before.

Nowadays, Chainalysis’ federal money comes from many corners: the Federal Bureau of Investigation, the Drug Enforcement Agency (DEA) and Immigration and Customs Enforcement (ICE), from financial regulators in the Securities and Exchange Commission (SEC), Commodity Futures Trading Commission (CFTC) and Financial Crimes Enforcement Network (FinCEN), from the IRS, the Secret Service (USSS), the Transportation Security Administration (TSA) – even from the Department of the Air Force.

Most have signed six-figure deals with Chainalysis, although some agencies spend more than others. For instance, the TSA spent $40,000 on one contract in 2018 while the IRS, Chainalysis’s biggest federal partner spent $4.1 million over five years – $3.6 million of it since 2018, according to the data.

ICE, with $2.6 million in total contracts, holds the number two spot, and the FBI’s $2.4 million is third.

What are they buying?

It’s tricky to state with certainty what the agencies are buying from Chainalysis. Many of the contracts are short on details, with 29 mentioning various product licenses, five noting “Reactor” software and others a cryptic mix of telling and vague. (The Department of the Air Force has spent over $110,000 on “BitCoin [sic] Cryptocurrency Transactions”).

But the company that raised $30 million in Series B funding a year ago makes only three products: Reactor, KYT and Kryptos. Only Reactor, its flagship transaction visualization software, has been around for more than a year.

“While our private-sector customers also use Reactor, we have also developed two newer products – KYT (Know Your Transaction) and Kryptos – specifically for them,” said Jonathan Levin, co-founder and chief security officer at Chainalysis.

Reactor is Chainalysis’ investigatory workhorse. It visualizes cryptocurrency movement across a blockchain and flags addresses associated with illicit activity.

Casey Bohn, a high-tech crime specialist with the Virginia-based National White Collar Crime Center (NW3C), who regularly trains law enforcement officers to use Reactor and other firms’ cryptocurrency tools, said Reactor takes some of the pain out of blockchain crawling.

“It’s a relatively easy tool to use. It’s not a rocket surgeon level of complexity,” Bohn said. “Once you figure the tool out you can really make some good headway in what is truly a tedious task.”

Bohn has taught federal, state and local officers, including some in the 10 agencies that contract with Chainalysis. He explained that blockchain analysis has broad appeal for them.

“All of these investigative agencies kind of have a specialized sub-niche” that intersects with cryptocurrency, he said.

One such niche is the IRS Cyber Crimes Unit (CCU), a five-year-old division of its larger Criminal Investigation (CI) wing and the force behind the tax collector’s cryptocurrency crimes investigations. It’s also a major Chainalysis client: CCU has spent over $3.3 million on four years of “Case Support and Training” from the firm.

The IRS did not respond to requests for comment. But in the 2019 Criminal Investigations annual report, IRS-CI Deputy Chief Jim Lee hinted his agents’ crypto-tracing prowess is “in demand” even outside of the agency.

“U.S. Attorneys want IRS-CI agents in all of their financial crime cases. The fact of the matter is, if a case involves money and it’s a crime that rises to the federal level, IRS-CI almost always has jurisdiction. There is no better example to this than in tracing cryptocurrency transactions,” he said.

IRS-CI Chief Don Fort has been even more explicit about his investigators’ relationship. He has said that Chainalysis helped the IRS and the Department of Justice dismantle a sprawling child pornography ring in South Korea.

But other agencies don’t talk about their cryptocurrency tracing activities. Most did not respond to requests for comment. FinCEN, the FBI and DEA declined to comment.

“DEA does not discuss any investigative techniques,” a spokesperson said.

Agencies may also not want to publicize their private-sector relationships, other now-public documents show.

“Public disclosure of Chainalysis, Inc.’s cooperation with ICE would also damage ongoing cooperative information sharing arrangements with other companies in the logistics and financial sector,” according to that document.

“We started off with smaller units within agencies who were focused on being able to deal with cybercrime and money laundering,” Levin said. “What we found is that the different types of crime and illicit activity that these agencies need to be able to prevent means that our appeal has become much broader to those organizations, and our role has expanded.”

The strategy triggered a snowball effect of federal procurement contracts that may well stretch beyond the figures disclosed here. Levin said some contacts do not get reported in the FPDS system.

“Our revenue is roughly a 50-50 split between public and private sectors,” Levin said. The public split includes contracts with state-level agencies and governments overseas.

In many respects $10.6 million is a negligible total, according to Bohn, the cyber crimes educator. He pointed out the U.S. government spends many times more on other private-sector tech solutions, like Cellebrite, which helps investigators crack mobile phone data. Cellebrite has made at least $40,000,000 from government contracts since August 2015, FPDS records show.

But when it comes to tracing cryptocurrency, Chainalysis appears to have the federal market cornered.