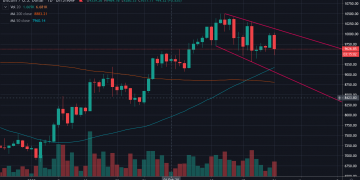 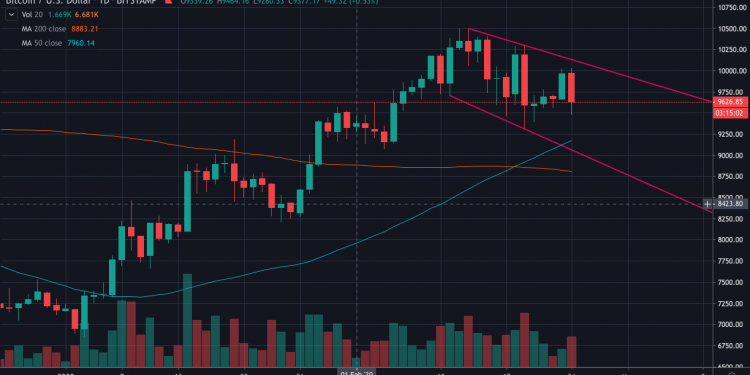 As U.S. stocks tumbled on Monday by the most in six months amid renewed coronavirus fears, bitcoin barely budged – at least in terms of the notoriously volatile cryptocurrency’s trading history.

Bitcoin (BTC) was down 4.6 percent as of 6:17 p.m. UTC (1:17 p.m. ET) to $9,517. But a decline of that magnitude represents merely the biggest drop since last week; already this year, bitcoin has suffered six other single-day losses of 3 percent or greater. And due to a powerful rally in recent months, the cryptocurrency’s price is still up about 32 percent in 2020.

Such a performance stands in stark contrast with the Standard & Poor’s 500 Index of large U.S. stocks, whose 3.6 percent plunge was the most for a single day since early August and wiped out investors’ gains for the year.

“There’s certainly a bit of fear in the bitcoin market, but it’s not anything close to the panic we’re seeing on Wall Street today, with the clear flight to safety,” said Mati Greenspan, founder of the analysis firm Quantum Economics, which specializes in cryptocurrencies and foreign exchange. “Three percent is a very different figure for stocks and for bitcoin.”

The episode could renew an ongoing debate among investors over whether bitcoin should trade as a risky asset like stocks and junk bonds, or if it’s more akin to a safe haven like gold or U.S. Treasury bonds. There’s also the possibility that it’s neither — in a category of its own and largely uncorrelated with traditional asset prices.

Indeed, the coronavirus wasn’t the only news potentially affecting bitcoin prices on Monday: Billionaire investor Warren Buffett asserted in a CNBC interview that he doesn’t own any cryptocurrency and “never will.”

The plunge in stocks came as authorities globally struggled to stem the spread of the coronavirus beyond China, raising concerns the global economy will suffer a bigger hit from quarantines and delays in international trade and travel, according to Bloomberg News. The epidemic has now spread to more than 30 countries, including South Korea, Italy and parts of the Middle East.

Traditional safe-haven assets like gold and U.S. government bonds rallied on Monday. Gold rose 1.7 percent to $1,676.50 a troy ounce, the highest in seven years. U.S. Treasuries rose, too, as the yield on the 10-year note declined by 0.11 percentage point to 1.36 percent. Bond prices move in the opposite direction from their yield.

A jump in bitcoin prices in January — after the U.S. killing of a top Iranian led to heightened concerns of geopolitical and economic turmoil — prompted some traders to speculate that the cryptocurrency might be gaining acceptance among investors as a safe haven.

But in a report last week, the Norwegian analysis firm Arcane Research noted bitcoin’s correlation with gold had weakened since the start of this year.

Greg Cipolaro, co-founder of the crypto-focused firm Digital Asset Research, said in an interview he recently studied bitcoin’s price performance over the past nine years on days when U.S. stocks experience big swings, defined as a price move that’s statistically two standard deviations away from average.

On the 13 times such daily moves occurred over the period, bitcoin’s price rose an average of 1.5 percent when stocks rallied. Bitcoin’s price fell 0.34 percent when there was an unusually large selloff. Since 2011, bitcoin rose by 0.6 percent per day, on average.

The takeaway for the bitcoin market might still be positive, he said, since hedge funds and other large investors are often hunting for assets that are mostly uncorrelated with traditional markets but boast a track record of high risk-adjusted returns.

Jeff Dorman, chief investment officer of the crypto-focused firm Arca Funds in Los Angeles, said in a phone interview that cryptocurrencies might be slower to react to global developments than stocks and bonds because they’re still largely disconnected from Wall Street; digital assets like bitcoin aren’t typically bought via traditional brokerage accounts.

“It’s irresponsible for anyone to say that bitcoin is truly a safe haven,” Dorman said. “Look at how gold and Treasuries and equities react instantaneously to global fears. Bitcoin and digital asserts live outside that work flow.”

Federal Reserve officials led by Chair Jerome Powell have signaled recently they see the current stance of monetary policy as appropriate, but that the coronavirus could put the health of the global economy at risk. The implication is that the U.S. central bank might need to cut interest rates to stimulate markets and business activity if the contagion leads to a steeper-than-anticipated dropoff in growth.

Such monetary-policy easing might ultimately bolster the case for buying bitcoin, Dorman said, since many analysts believe that limits on the supply of new units of the cryptocurrency make it useful as a hedge against inflation.

“I don’t expect bitcoin to trade as risk-on or risk-off asset,” he said. “But over a longer period of time, anything that’s inflationary, or said another way devalues other currencies, strengthens the purchasing power of bitcoin.”

Caitlin Long on Coronavirus, Crypto Custody and Building a Bank